Some of our city’s most iconic structures were built as businesses. Although private property, these commercial buildings are very much in the public realm. Many are built at prominent locations and are easily visible from public places, despite often only being open to paying customers. These character-rich spaces are highly sought after, and are very important in helping to define Edmonton as an interesting and diverse place to live. 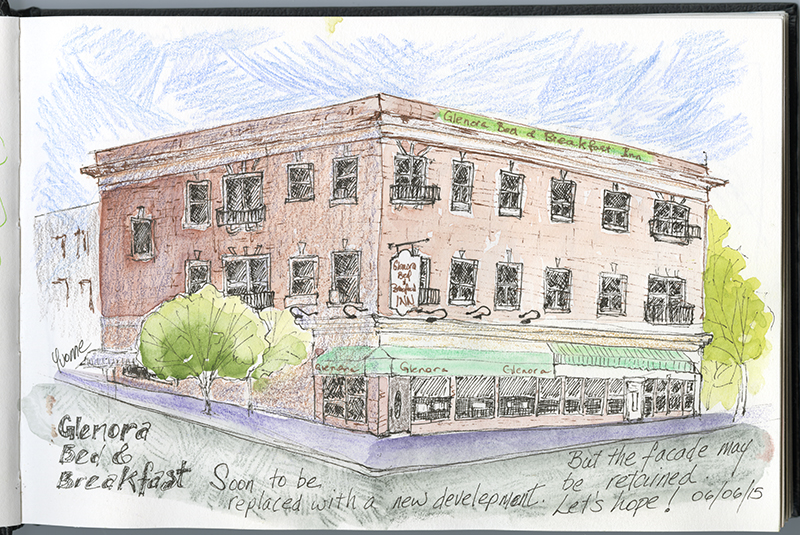 Despite its name, this 1912 Edmonton landmark was built on the border between what are now Westmount and Oliver neighbourhoods on the southeast corner of 102 Avenue and 124 Street.

It was originally an apartment and retail space. Designed by architects Herbert Magoon and George H. MacDonald, the building had hardwood floors on the upper storeys, high ceilings, and natural gas fireplaces, and was considered a “desirable residential property”. Stone accents, decorative wrought iron railings, red brick, and curved parapets were also reminiscent of Italian-Renaissance style. 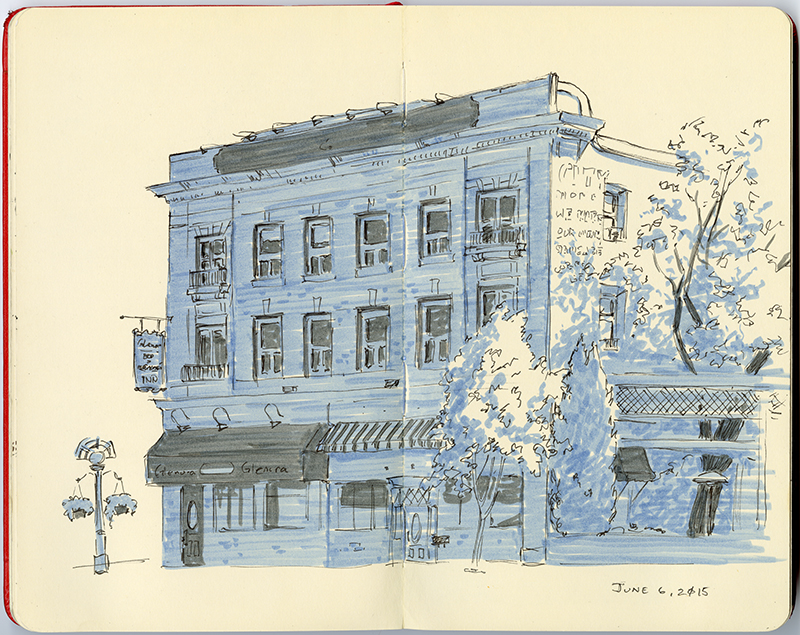 In 1994, the Freeland family purchased the building and completed extensive renovations to the interior for a B&B and restaurant. In 2015, Edgar Developments, preserved the exterior brick during demolition, and rebuilt the façade on the street-level of their new 26-storey apartment building, The MacLaren. 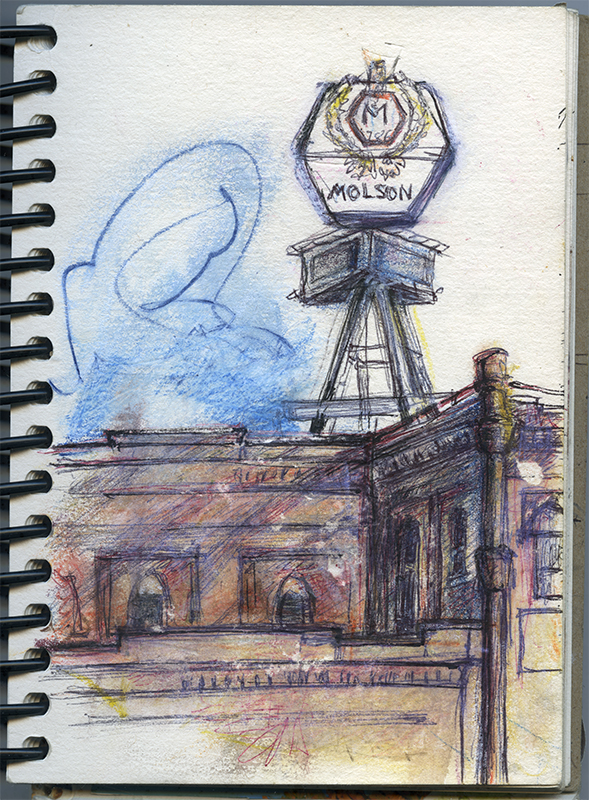 Businessman and former Mayor of the City of Strathcona, William Henry Sheppard, hired Chicago architect Bernard Barthel to design the 5-storey German castle style brewery for his Edmonton Brewing and Malting Company. It was built in 1913 by Peter Rule Construction Company using local brick, steel and reinforced concrete, and features a variety of stone detailing above the arched windows, with torches that top corner turrets.

The first beer to be produced from the brewery included Yellowhead Beer, Edmonton Family Lager and Imperial Stout. The brewery survived prohibition by selling “Temperance Beer”, a low-alcohol beer available by prescription. In 1924, Sheppard commissioned architect Ralph H. Trouth to design an Edwardian-style red-brick office building beside the brewery. 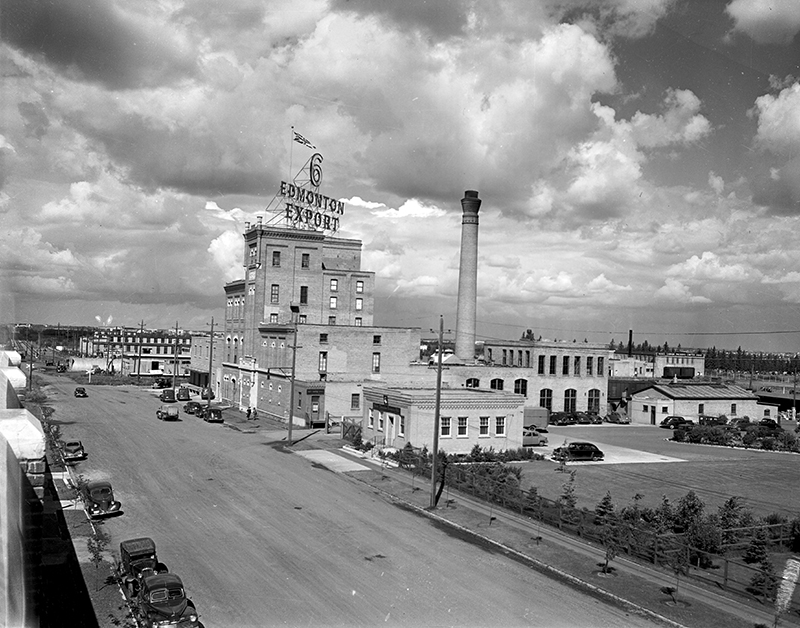 Sheppard sold the company to Lethbridge brewer Fritz Sick in 1927, and in 1958 the brewery was purchased by Montreal-based Molson. In 1960, a giant revolving Molson “M” sign was installed, almost as iconic a landmark as the building itself. Molson closed the brewery in 2007.

The building is now a part of the Edmonton Brewery District development. The building was designated a Municipal Historic Resource in 2015. 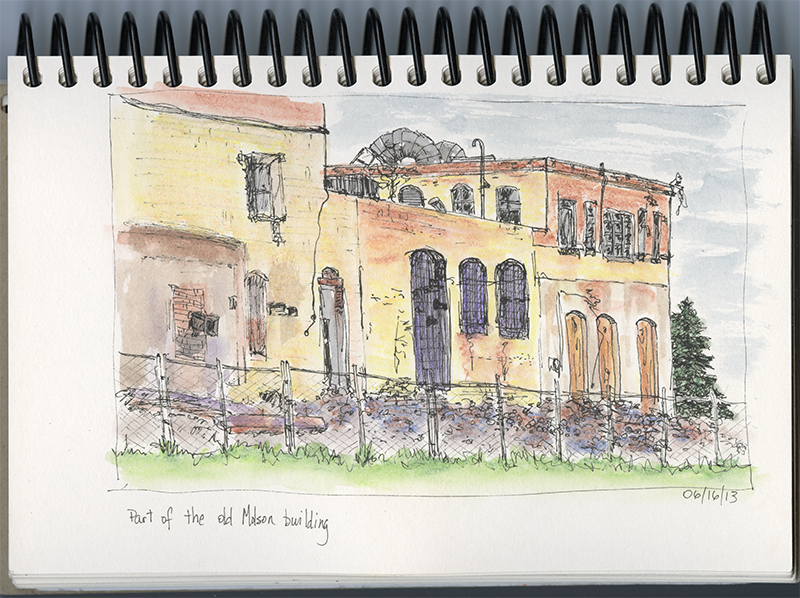 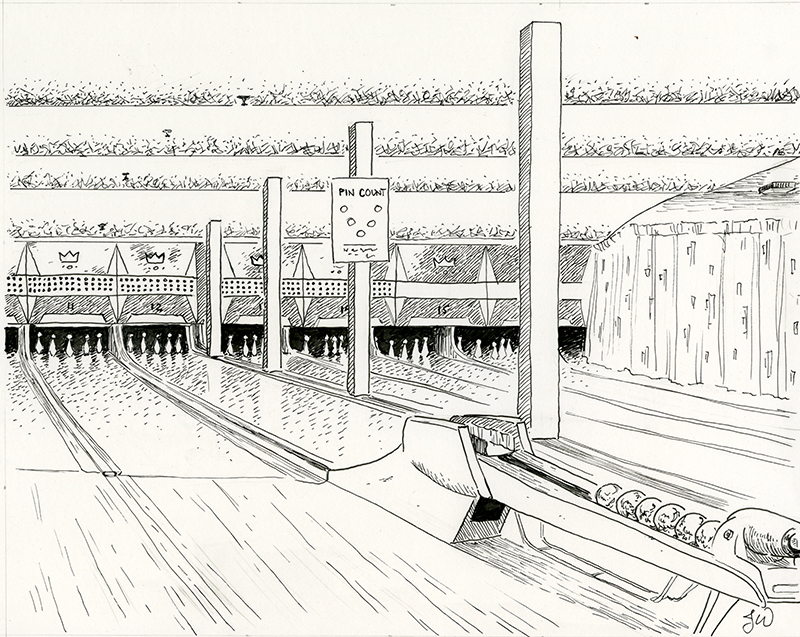 Opened in 1959 by Lawrence Stride, Plaza Bowling was one of the first businesses in the growing neighbourhood of Westwood, developed after WWII. Following annexation by Edmonton in 1910, the area north of 118 Avenue, south of the Yellowhead Trail, and between 97 Street and 107 Street remained mostly rural until then.

Many of the first residential homes were built between 1945 and 1970. The area encompasses the first City owned and operated cemetery, Beechmount; the first licensed airfield in the country, Blatchford; and the Northern Alberta Institute of Technology.

The less ornate and more minimalist modern style of the brick building housing Plaza Bowling became popular after WWII. The bowling alley itself descends one story below street level. 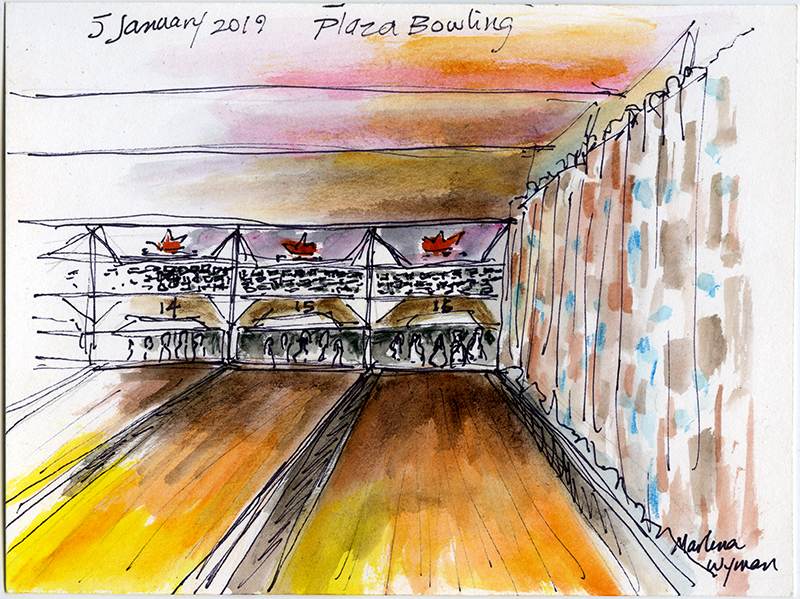 Plaza retains its sixteen original wood lanes and most of the original five-pin bowling alley design and character including the mid-century-modern patterned wool curtains.

Plaza Bowling has been keeping Edmontonians entertained for sixty years by three generations of the family. Lawrence Stride’s son, Terry Stride, took over the business in 1977 and operated it for 39 years, followed by his son Trevor, who has carefully maintained and restored the original features and character of the bowling alley to honour his family’s history in the building. 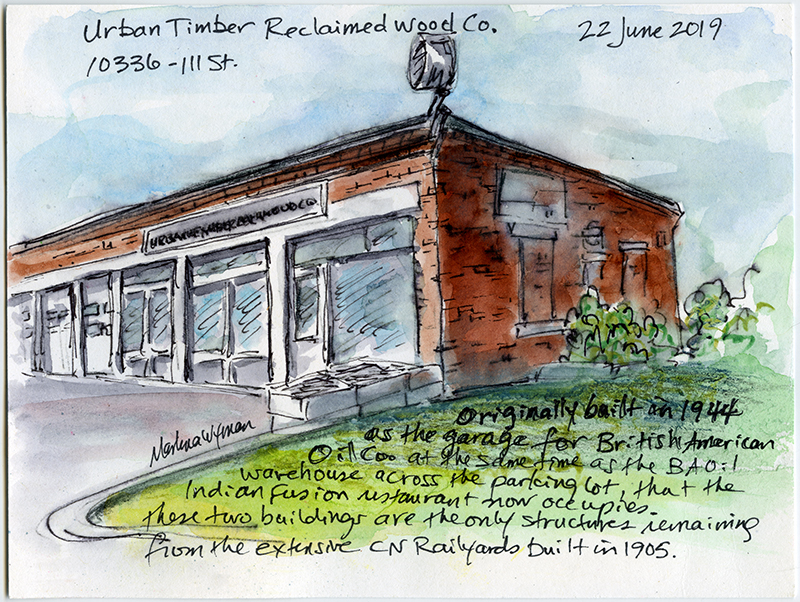 Indian Fusion the Curry House and Urban Timber Reclaimed Wood Co. stand on part of what was originally the yards of the Canadian National Railway, which also absorbed the Canadian Northern and Grand Trunk Pacific Railways. The rail yards were built in 1905, and extended from 101 Street to 116 Street between 104 Avenue and 105 Avenue.  The area expanded even further with the Canadian Pacific Railway yards that were located between Jasper Avenue & 104 Avenue, and 109 Street & 111 Street. These extensive rail yards (20 tracks wide) dominated much of Oliver and the western portion of downtown until 1988, when the yards were phased out of operation and by 1996, the tracks and most buildings had been removed or demolished.

The brick building that the Indian Fusion restaurant now occupies was built in the rail yard in 1944 by British American Oil Co. as an oil warehouse, tank storage and pump-room. The smaller brick building across the parking lot, now Urban Timber, was built at the same time by B.A. Oil as their garage. These are the only two remaining buildings still on their original sites. 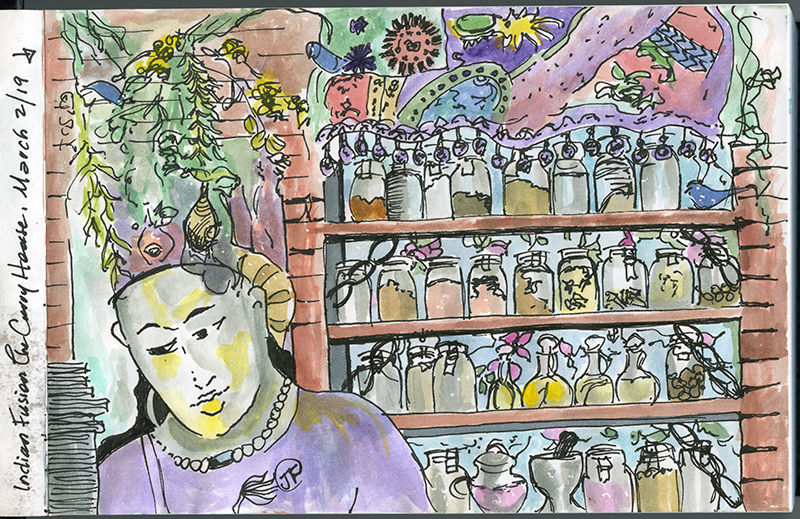 Indian Fusion represents an additional level of heritage in Edmonton: the cultural heritage of Indian and Fijian food and design. Urban Timber also represents an additional level of heritage in their use of reclaimed wood from which they make furniture, flooring and doors. Urban Timber reclaimed the wood from the Cloverdale footbridge that was demolished in 2016, and created hand-crafted furniture with a label to indicate that the wood came from the footbridge. 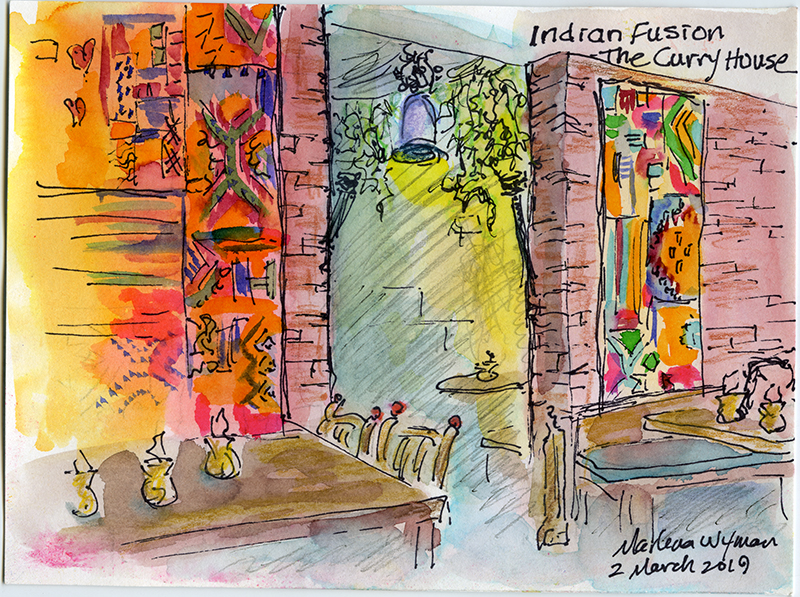 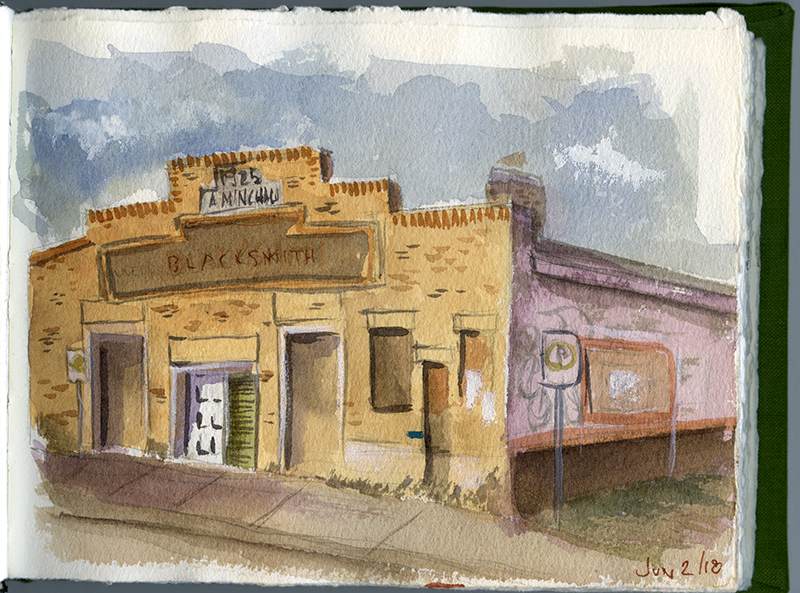 The A. Minchau Blacksmith Shop in the historic district of Ritchie holds a legacy of the city’s boomtown past. Adolf Minchau settled here with his wife Bertha in the late 1800s and built the blacksmith shop in 1925, starting a long time family business that Adolf handed over to his sons, Fred and Stanley, in 1955. The unassuming architectural style is typical of the era and trades. Presently one story high with a low, wide angled roof and red and white brick exterior, an upper section no longer exists. 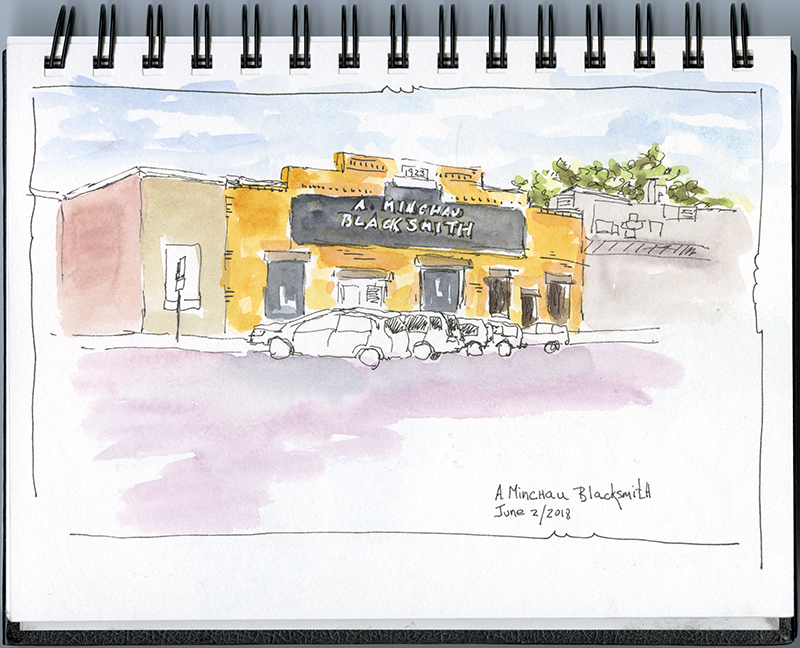 In recent decades the pressures of modernization and development significantly affected the business. A change of ownership in the mid-1980s was followed by a more recent controversy over the building’s potential demolition. In 2018, it was listed on National Trust’s Top 10 Endangered Places. 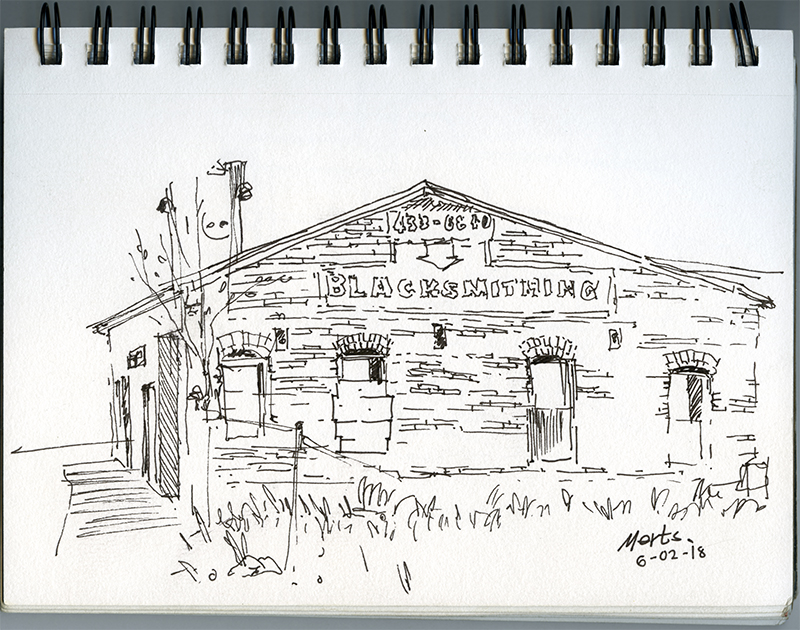 Without official historic designation in place, demolition is still imminent. However, citizens with an interest in the city’s history understand that this building is integral to the character of the area, and have been lobbying for its preservation. 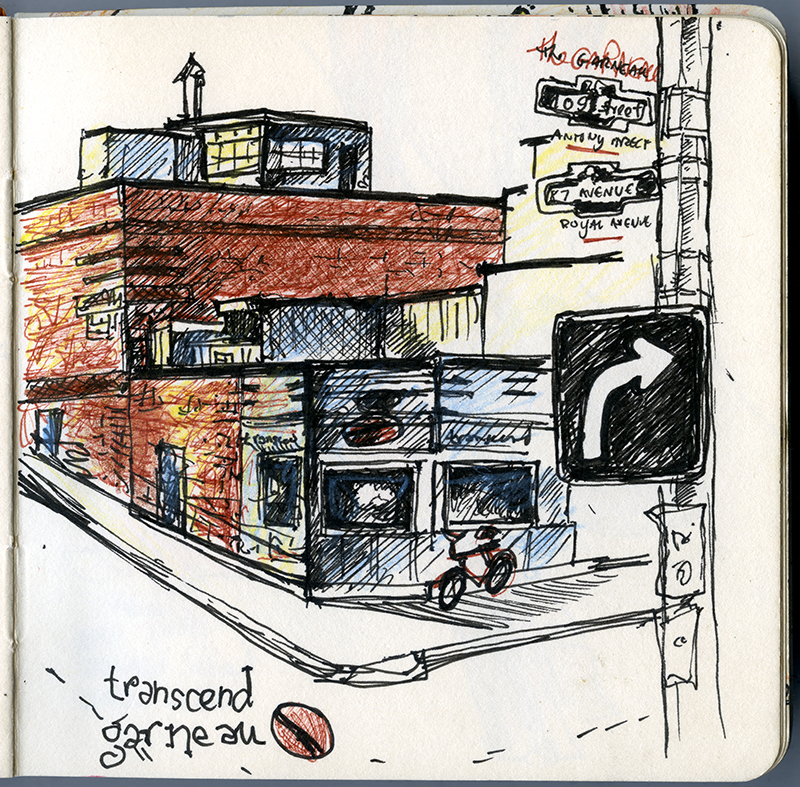 The Garneau Theatre was built in 1940 and designed by architect William G. Blakey in the Art Deco Moderne style. The building is a series of rectangular boxes with long horizontal lines, flat roofs and two-tone geometric decorations. On the larger rear portion, the bricks form a series of horizontal lines that spell out “GARNEAU”. The distinctive marquee features art deco elements and neon signs.

The interior walls were painted in stripes of sea green and ultramarine, the doors and columns were gumwood, the theatre seats were blue leather with mohair backs, and included some “two’s company” seats, colored red in contrast to the single seats.

The Garneau Theatre was the second cinema built outside the downtown core in Edmonton. Beginning in 1941 it was leased to Famous Players until 1990, and then to Magic Lantern Theatres until 2011 when the local non-profit Metro Cinema Society took over operation. In 2009, it was designated a Municipal Historic Resource and underwent extensive restorations to return the theatre to its 1940s appearance.

The first Avenue Theatre located at 9420 – 118 Avenue opened in 1934 as a 778-seat single-screen movie house. The new, larger Avenue Theatre opened April 7, 1950 at 9030 – 118 Avenue with the film Jolson Sings Again. The theatre was the fourth Edmonton film house to be operated by Odeon.

The new theatre was designed by the architectural firm Main, Rensaa and Minsos and built by I.F. Shacker and Rolf Vollan, with local firms supplying and installing building materials and fixtures. It was a modern design with white stucco exterior and neon sign made by local business Veribrite Neon signs. Theatre patrons enjoyed a spacious lobby with robin’s egg blue walls and a dusty rose ceiling, broadloom carpeted theatre with leatherette seats, and a “crying room” for parents with babies. The theatre was fitted with the latest in technology with twin projectors and a Cycloramic custom screen.

Famous Players took over operations in 1982 and it closed as a movie theatre in 1986, after which time it was rented to community groups from time to time. The building became a skate park from 2005 to 2008. It was transformed once again, this time into an arts and performance space for music concerts, theatre productions and festivals. It was home to one of the city’s largest stages, a massive 1500 square feet. The theatre closed in June 2014 and now stands vacant.

Considered by many to be Edmonton’s most iconic building, the Hotel Macdonald has been a distinguished landmark overlooking the North Saskatchewan River since it was completed in 1915 by the Grand Trunk Pacific Railway. 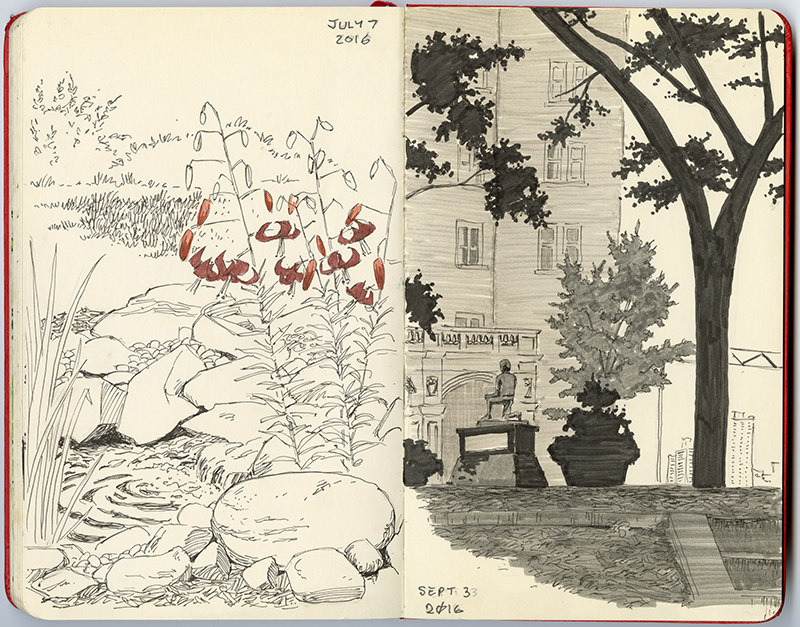 Named for Canada’s first Prime Minister, Sir John A. Macdonald, it was designed by the Montreal architectural firm of Ross & Macdonald in the Canadian Chateau style of grand railway hotels. Impressive architectural details were included in the L-shaped, seven storey hotel with high-pitched irregular rooflines and copper dormers. The building was finished with fine limestone, and included arches, corbelled balconies, turrets, finials and carved gargoyles. The Frank Oliver Memorial Park beside the hotel, a small but desirable downtown green space, allows for an unobstructed view of the hotel’s historic architecture.

An architecturally unsympathetic 1953 addition dubbed “the box it came in” was demolished in 1986.  The hotel closed in 1983 and, in order to save it from the wrecking ball, the City of Edmonton designated it as their first Municipal Historic Resource in 1985. Canadian Pacific Railway purchased the hotel in 1988 and it was carefully restored and reopened in 1991. Today it operates under the Fairmont banner, and remains a significant part of Edmonton’s built heritage and cultural fabric. 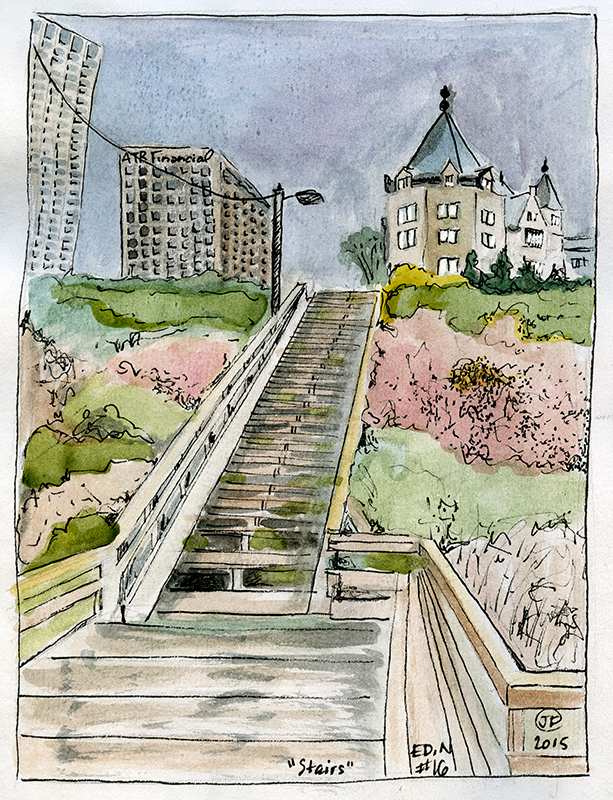 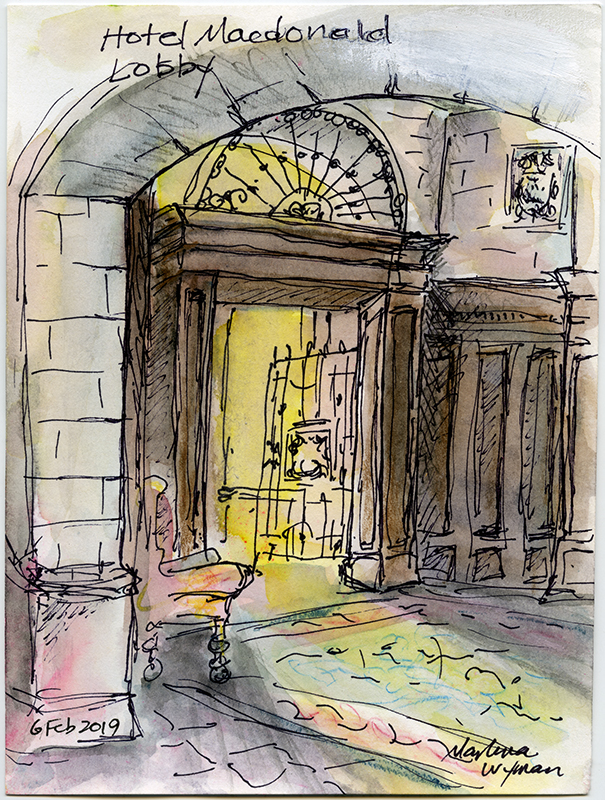 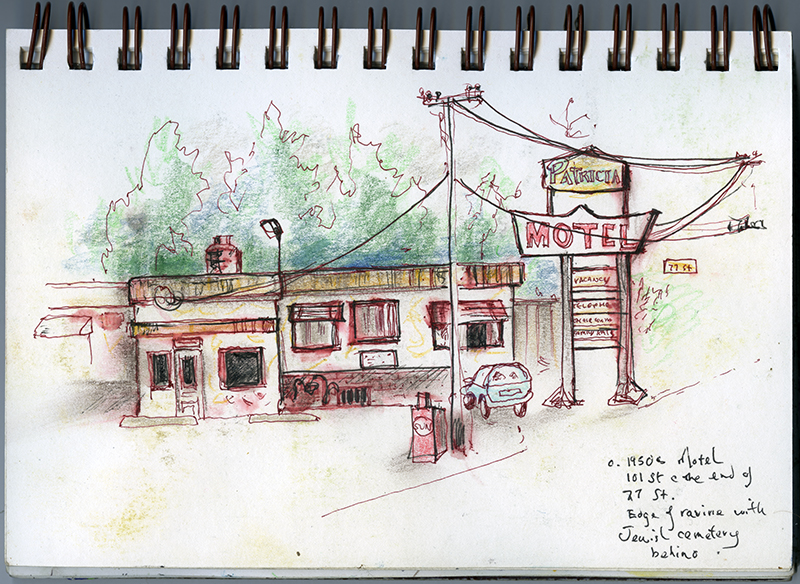 The Patricia Motel was built in 1957 in the Forest Heights neighbourhood, an unusual location for a motel in the otherwise post-WWII residential area. The original owner of the motel was Ed Leger, a hotelier, land developer and one of Edmonton’s city councillors.

When first built, the motel was typical of the era and had the extra benefit of a swimming pool, but over time the pool was left empty and the motel deteriorated. Near the end of its life, the motel guests were clients of various social agencies staying for longer terms.

In 2016, City Council approved a plan by GMH Architects to build a 16-storey seniors’ complex with 300 units in two buildings, retail space and a café patio at street level. The motel’s residents were allowed time to relocate, and the motel was demolished in August 2019. In an ironic twist, David Hamilton, owner of GMH Architects spent his first night in Edmonton at the Patricia Motel in 1969.