Edmonton has some fine examples of residential architecture from various eras, although many have been demolished. Henderson’s Edmonton Directories are a valuable resource for locating the names of those who owned or resided in a house over time, and in some cases, their occupations. For married couples, the only listed name was often that of the husband, but later editions included the wife’s name. 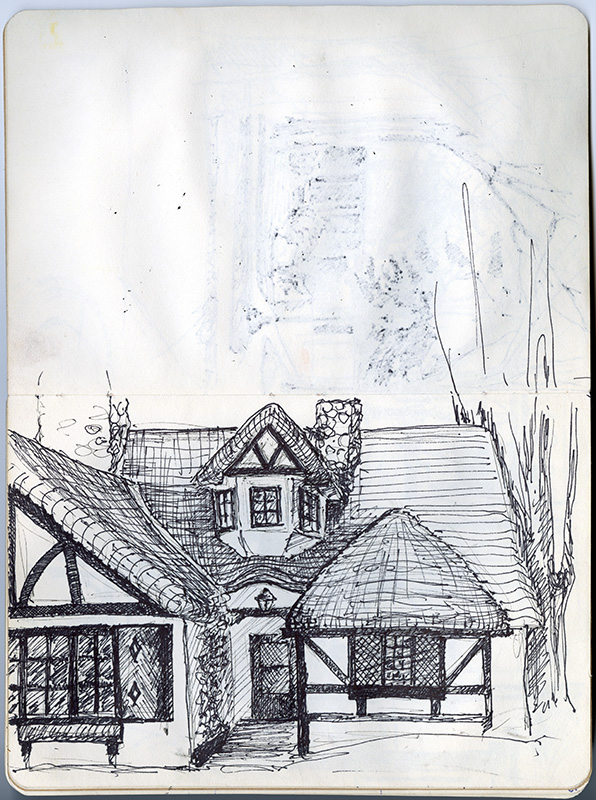 The house at 13110 – 104 Avenue serves as an example. The address first appears in the 1931 directory. Regd [Reginald] T. Boyce is listed as residing, and then as householder from 1932 to 1935. His occupation is first noted as an employee of the Board of Pensions, and by 1933 he is listed as the Chief Clerk of the Canada Pensions Commission.

This house was an Ernest Litchfield Home, built in the Tudor Revival style. Litchfield was a local contractor who was known for building a publicly displayed model home, “The Home of Tomorrow”, now located at 1 St. George’s Crescent. 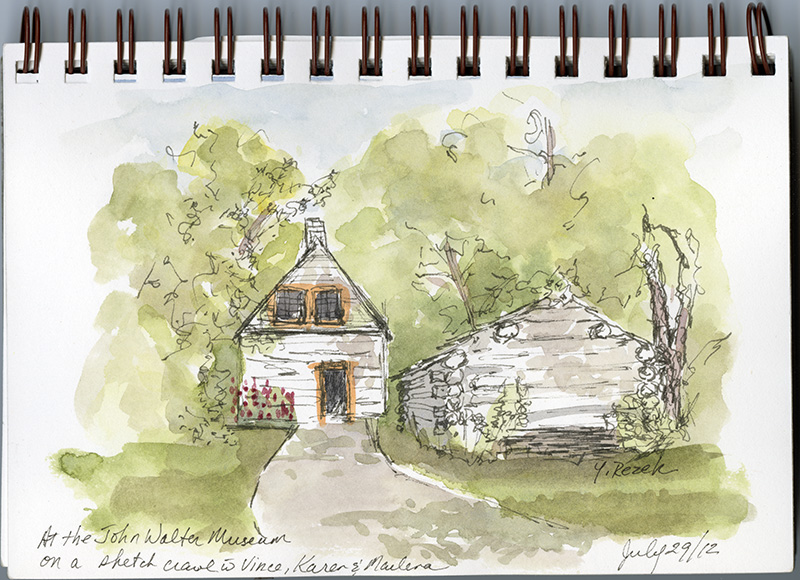 The City of Edmonton’s John Walter Museum consists of three houses built by John Walter. He came from the Orkney Islands in 1870 to build York boats for the Hudson's Bay Company, and then carried on to own and operate businesses including a blacksmith and carriage shop, ferry, coal mine, and sawmill. 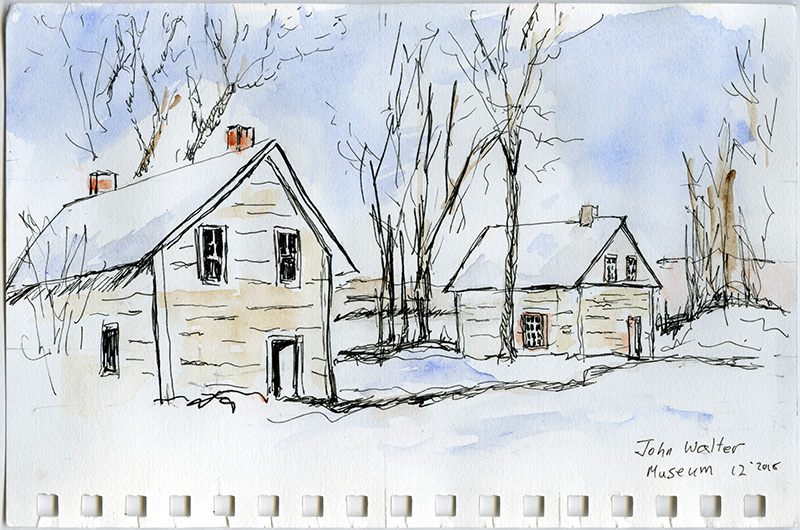 In 1886, he married Annie Elizabeth Newby and they had two children. The first home, built in 1875, is a small, single storey log house. It is the oldest surviving house on the south side, and also housed Edmonton's first telegraph office. The second home, built in 1884, was constructed similarly and was larger to separate his business and home. 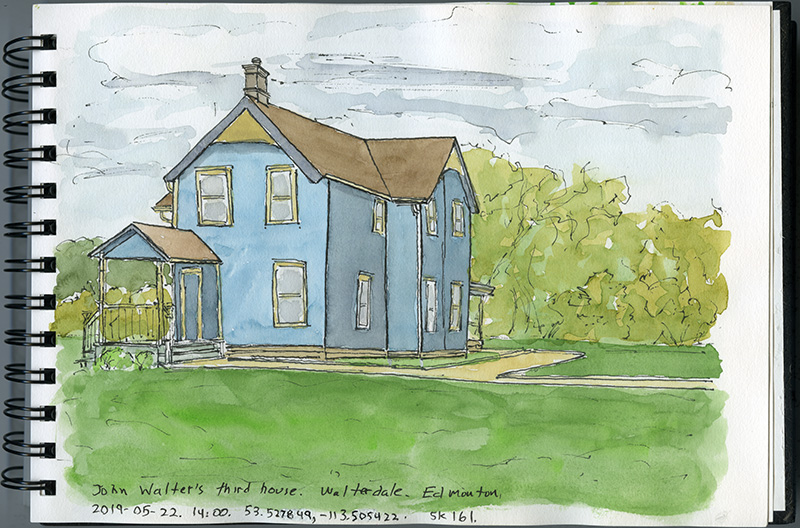 The third home was built in 1901 in the Queen Anne style featuring refined Victorian details and insulated with wood shavings from his mill. It was one of the first homes in Edmonton to have electricity. In 1974 it was moved closer to the two other homes from its original location under the High Level Bridge. 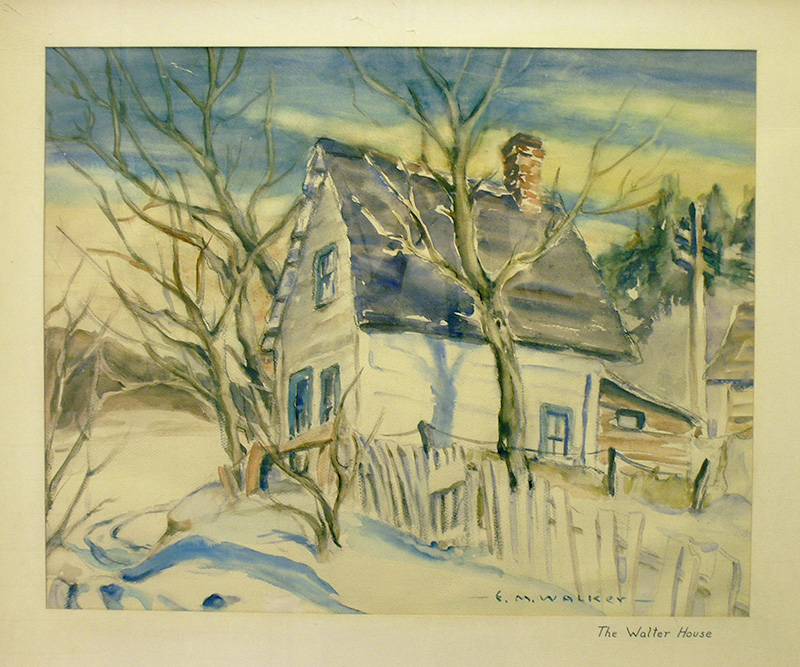 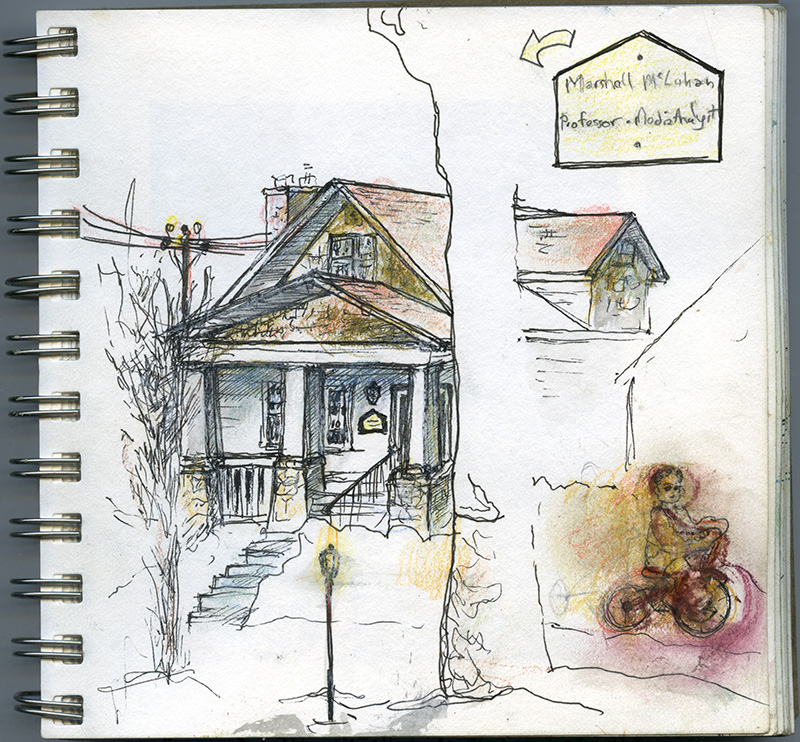 Herbert and Elsie McLuhan built their house in the Highlands neighbourhood in 1912. The craftsman style bungalow was designed by architects Nesbitt & Morehouse and constructed by Bailey & Berry.

The house features a low pitch roof, open verandah with front gable, and tapered square columns. The wood cladding and double hung wooden sash windows are typical of Edmonton homes of the era. Marshall McLuhan spent his early years here until 1915 when the family moved to Winnipeg. He is known for his sociological and philosophical theories, focusing on language, perception, and communication under the influences of the mass media. 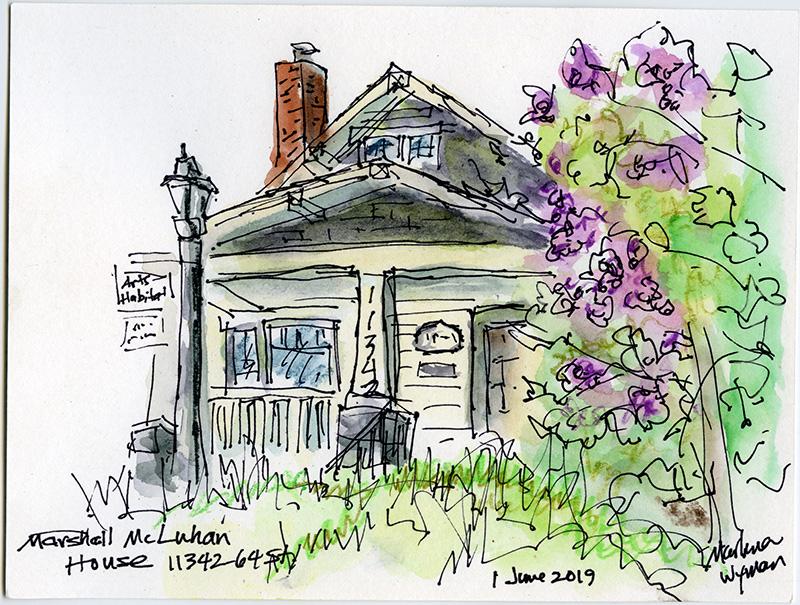 In the early 1920s the McLuhans sold the house to Gladys Griffin, a teacher and assistant principal at Highlands School.

In 2012 the house was purchased by Arts Habitat Edmonton, who restored and renovated the house with architect David Murray, interior designer Johanne Yakula, and support from the City of Edmonton, Edmonton Arts Council, and the Social Enterprise Fund (Arts Hab). The house was designated a Municipal Historic Resource in 2013. It has become a space for artists and their work, a legacy to McLuhan’s theme “the medium is the message”. 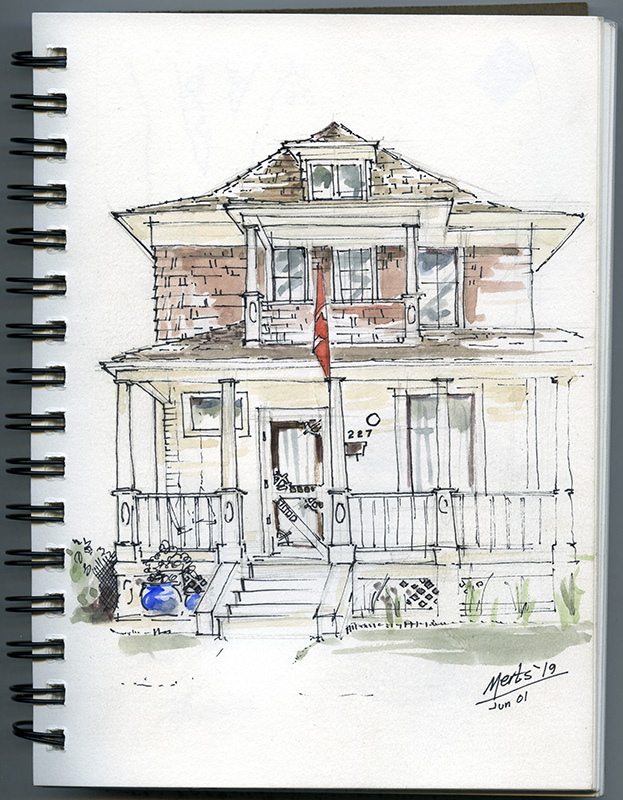 This two and a half-story Four Square house was built by Garnett Meiklejohn in 1912. In 1915, Herbert and Eda Owen moved in and the house also served as a Dominion Meteorological Station. A 60-foot tall wooden tower, painted red, sat atop the roof with access from a modified rear dormer. It held a rotating anemometer to gauge wind speed and the tower had to be climbed daily to take readings. 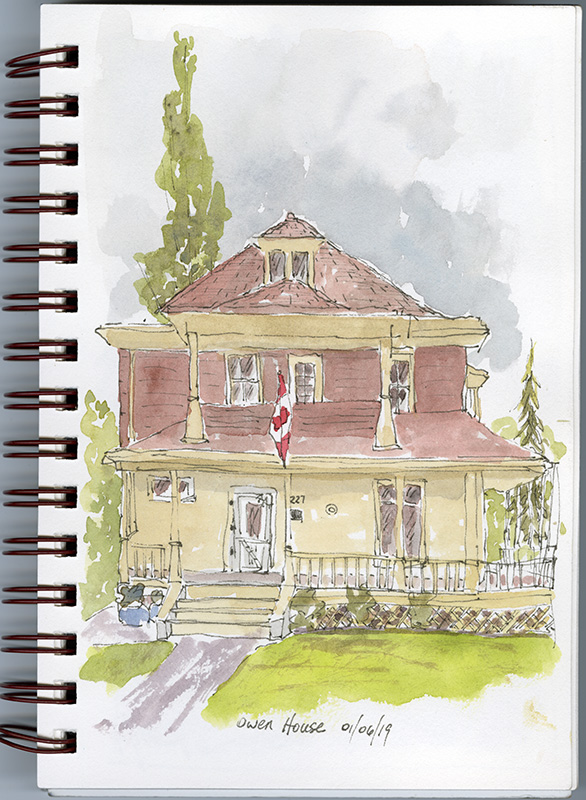 Herbert worked as meteorologist with Eda assisting him. When Herbert left to fight in WWI, Eda took over his duties, and when he died overseas in 1917, she was named the Provincial Agent and Weather Observer at a time when women were not considered persons under the law, nor thought to be qualified to be working as professionals.  The Highlands station was regarded as the most significant meteorological post outside of Toronto. Eda was the only woman in Canada to hold such a position and she worked until 1943, although she did not receive the pay that a man in the same position did.

The house has been restored to its original appearance and was designated a Provincial Historic Resource in 1994. 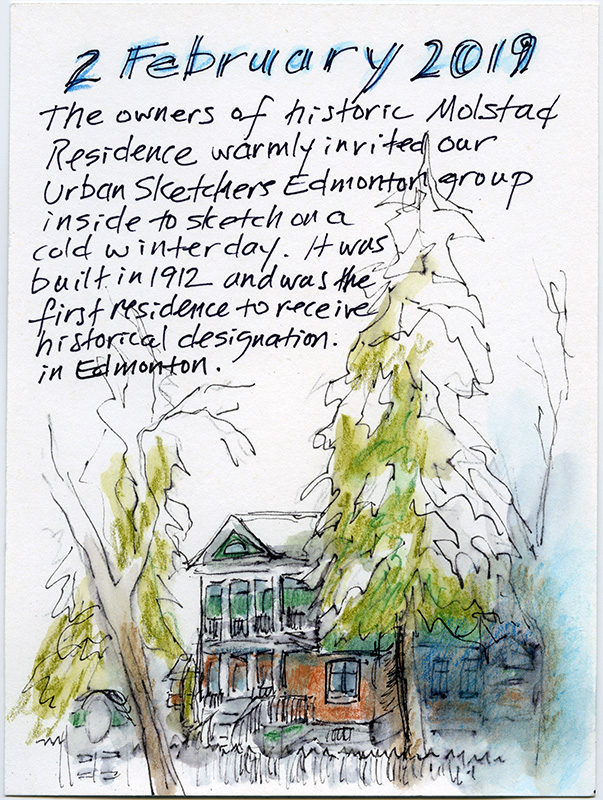 Edmonton realtor Edward H. Molstad and his wife Addie built their home in 1912. It is a stately two-story brick and wood Four Square house originally built on 5 acres of land, surrounded by a circular driveway, fountains and trees, and included a carriage house and servants’ quarters. In 1931, part of the house was converted into apartments, but the Molstad family continued to live there until 1982. 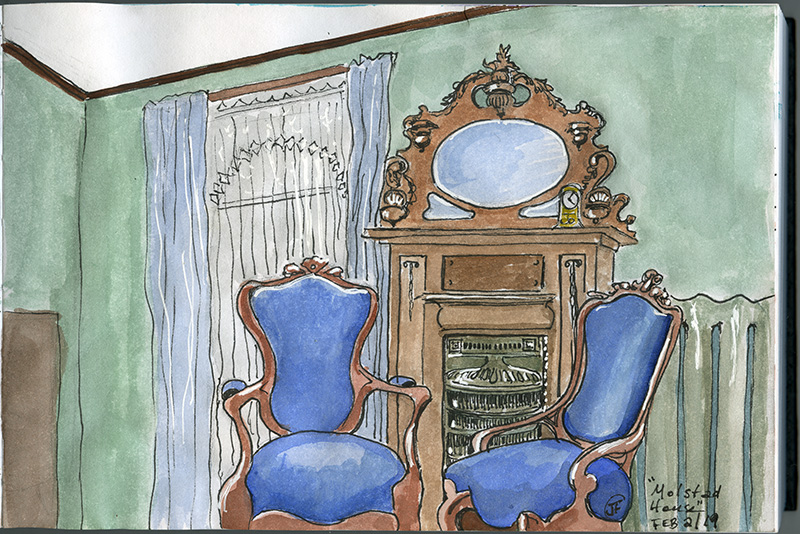 When Walter and Jean Kipp purchased the house in 1988, they worked to restore it to its previous glory as a single family home. Present owners Scott and Erica Richards continue the care for the preservation of this elegant home. 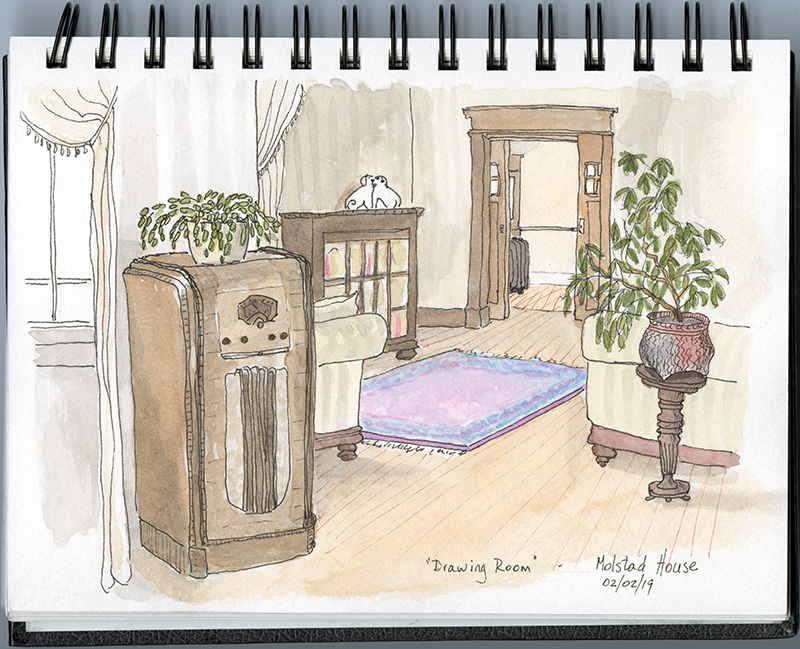 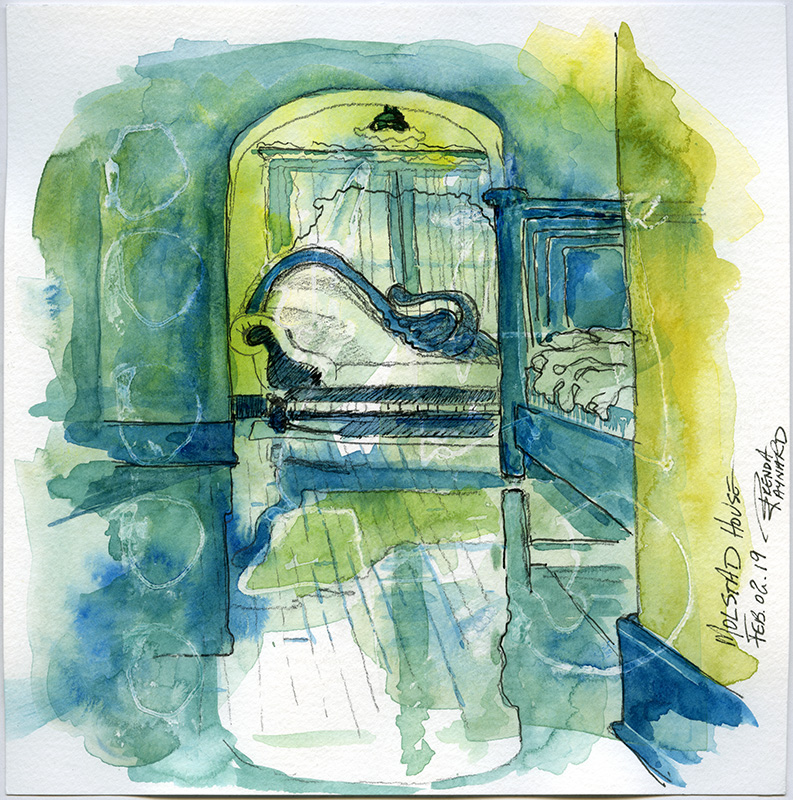 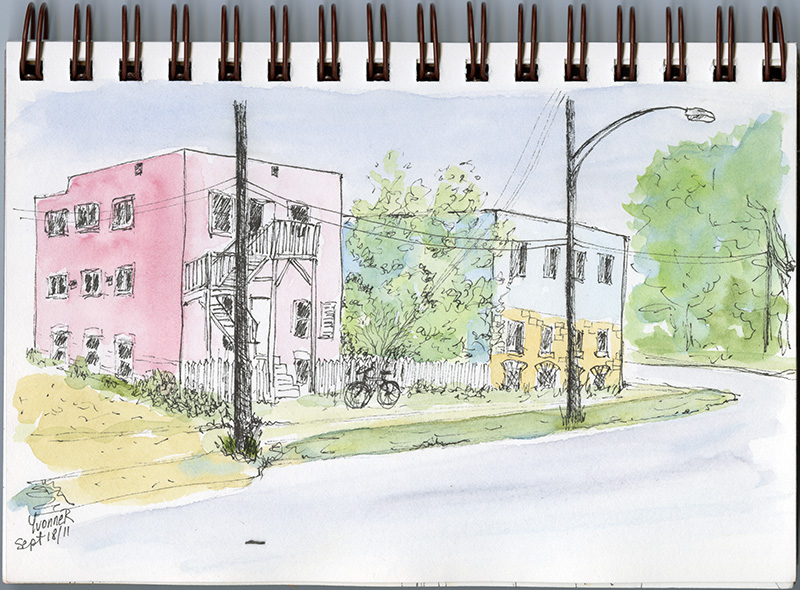 The Trynicky Apartments and Georgia Apartments, with their distinctive pink and blue colour scheme, were a recognizable feature for six decades, perched atop the river bank in the Boyle Street neighbourhood, one of the oldest in Edmonton. The property is non-grid aligned because it followed the traditional Metis river lots common to the city’s fort history, which were long and narrow plots perpendicular to the river. 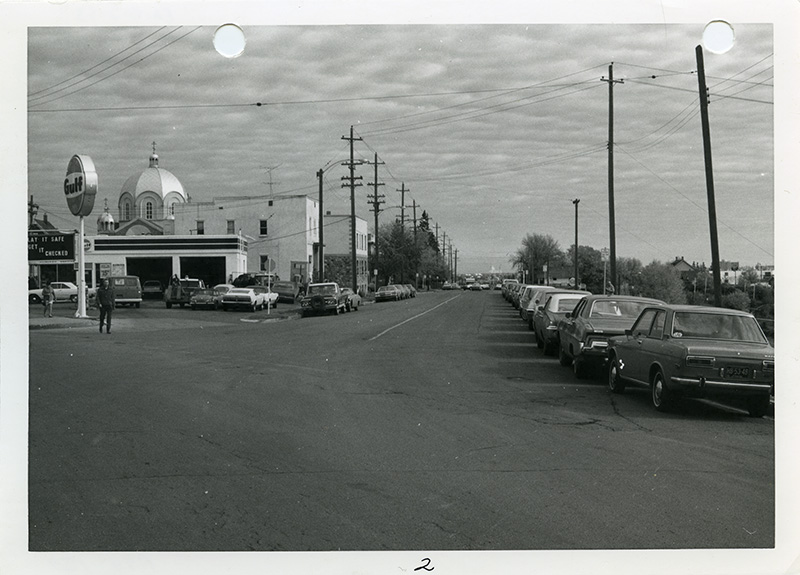 This pair of two-and-a-half storey flat-topped apartment houses were constructed in 1958, south of and across the street from the Gibson Block. The blue building to the east had a stone-work façade on the first floor and faced the St. Barbara Russian Orthodox Cathedral. This building was known as the Trynicky Apartments or the 10110 Suites, with six apartments. The pink building with 20 suites, known as the Georgia Apartments, sat on the same site on the west side.

Unfortunately, these apartment buildings were neglected for many years. By 2010 the structures had fallen into disrepair and demolition took place between 2015 and 2017. The plot of land is currently empty.