Public buildings are an important way in which we see ourselves as Edmontonians. The buildings are often built on a grand scale, and their designs reflect their varied purposes. Some are utilitarian, while others are imposing, designed specifically to promote and reinforce values, a pride of place, and as a reflection of who we are, and who we aspire to be. 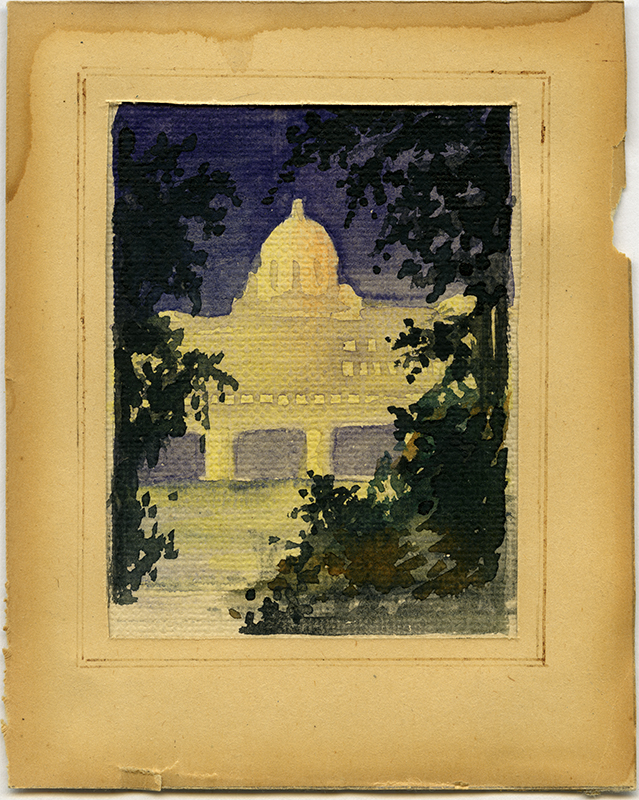 The Legislature (no date)
By Margaret Chappelle, City of Edmonton Archives, EAA-2-10

On March 15, 1906, Alberta’s Legislature opened its First Session. The ceremonies were held at Edmonton’s Thistle Rink, just north of Jasper Avenue, after which the Assembly moved to nearby McKay Avenue School.

The official Alberta Legislature was built between 1907 and 1913 by Provincial Architects Allan Merrick Jeffers and Richard P. Blakey. The symmetric design and layout are elements of the Classical Revival and Beaux Art styles, evident in the main entrance’s Corinthian columns and a dome rising above a spacious rotunda. Materials for the building’s lofty exterior include granite, sandstone and limestone. 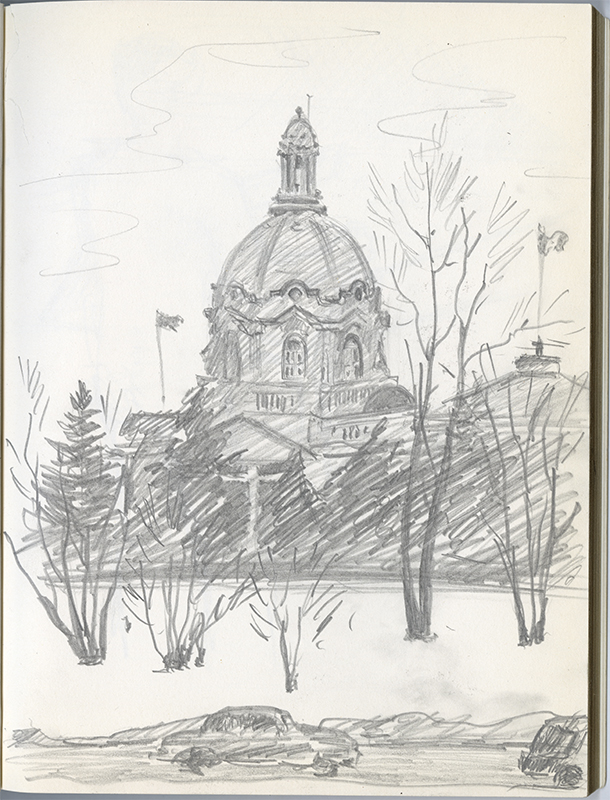 The main entrance leads directly into the rotunda with its circular marble fountain, surrounded by marble columns. The Chamber has its own 110 foot high dome that features stained glass skylights. In 1932 palm seeds were planted in pots in the gallery around the interior dome; these are now large palm trees above the rotunda. To commemorate Canada’s centennial in 1967, a carillon was installed on the fifth floor.

The Legislature, overlooking the river valley, is among the most iconic buildings in Edmonton, with extensive grounds and a front fountain and reflecting pool welcoming the citizens of Alberta. 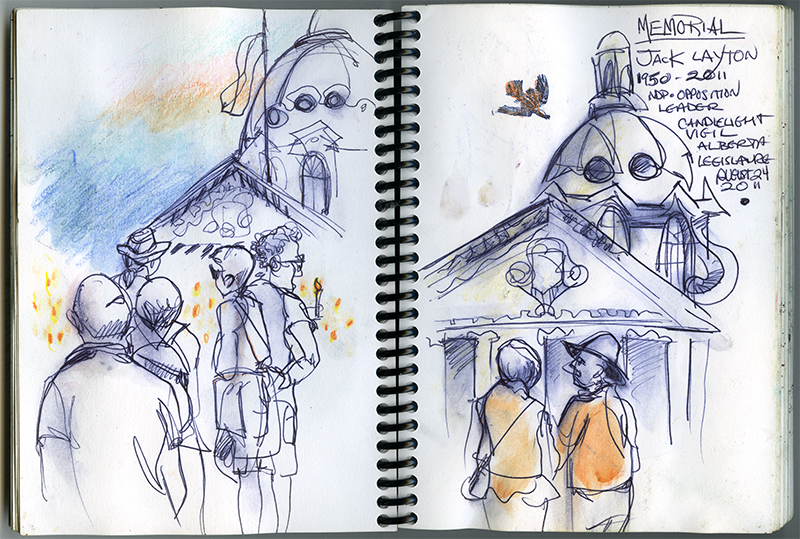 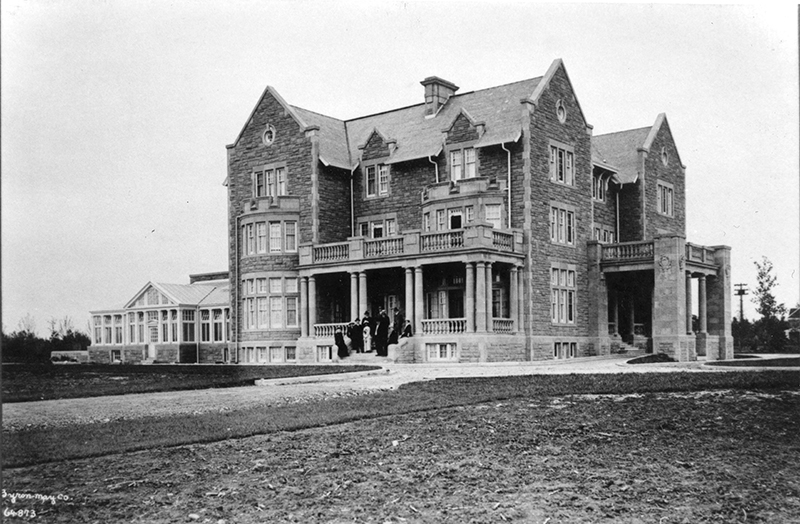 Officially opening in 1913 as a residence for Alberta’s Lieutenant Governors, Government House was designed by Architect R.P. Blakey under the direction of A.M. Jeffers, Chief Architect of the Alberta Legislature Building, and constructed by the Department of Public Works.  Designed in the Jacobean Revival style with Scottish Baronial elements, the three story sandstone building is grand in scale with asymmetrical façades, decorations, bay windows, balconies, and high gabled roofs with dormers. A large conservatory was built beside the house and later demolished. 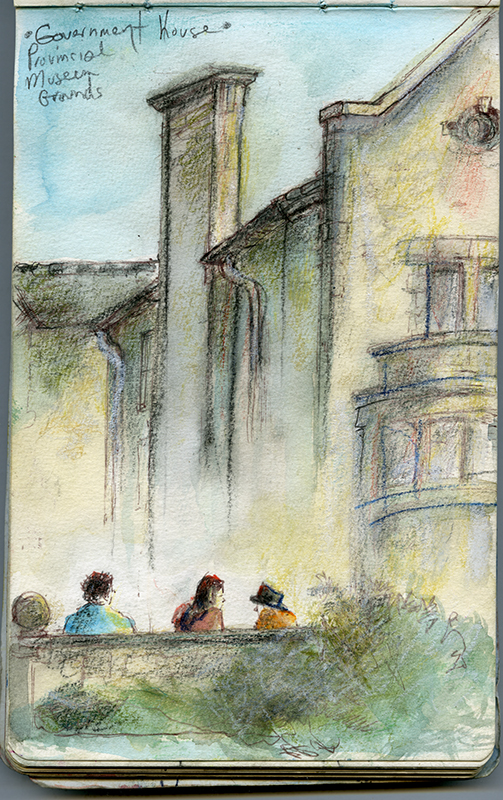 George H.V. Bulyea became the first of six Lieutenant Governors to live there, and John Bowen was the last when ordered to leave in 1938 due to political differences with Premier William Aberhart. The house was then closed as a vice-regal residence. 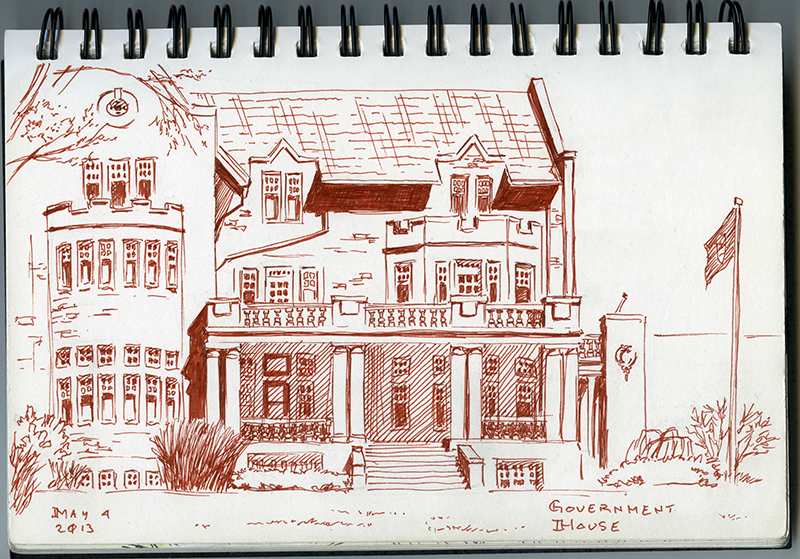 During and after WWII, it was used as offices and living space for American airline personnel, and then a convalescent hospital and home for veterans. Through the 1960s and 70s, the house was used for government caucus chambers and official receptions. Much needed restoration and renovation work took place in the mid-1970s, and the Government House Foundation was formed. The Foundation was instrumental in having Government House declared a Provincial Historic Resource in 1985, and a National Historic Site in 2013. 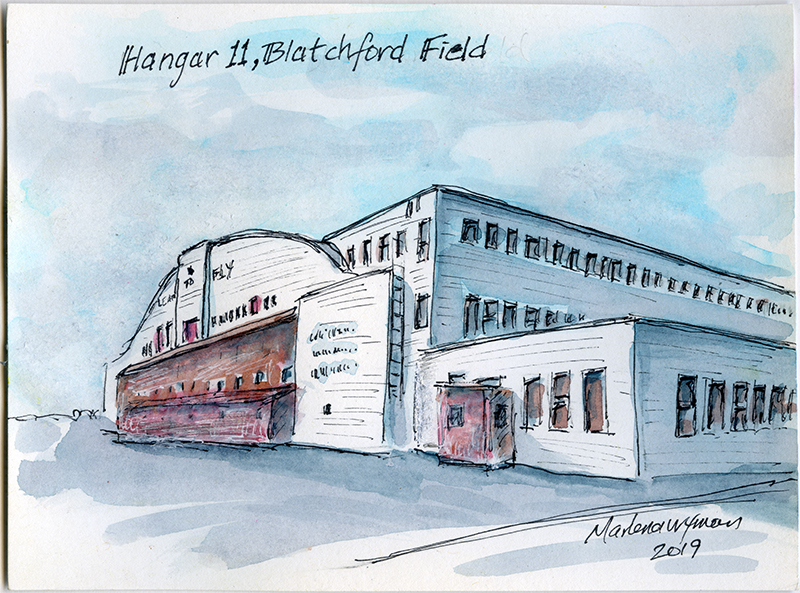 Built in 1942 on the NE corner of Blatchford Field (later the Municipal Airport), Hangar 11 is one of only two remaining WWII-era hangars on the site. It is built entirely of wood, its massive Bowstring trusses providing an imposing curved roof, flanked by three-story office wings.

Hangar 11 was built in partnership with the US Air Force. It served a vital function in the British Commonwealth Air Training Plan during the war. This plan was called the “Aerodrome of Democracy” by Franklin Roosevelt, and trained thousands of aircrew and personnel during its time.

It was part of the Northwest Staging Route, a series of airports developed for the Lend-Lease program. The Edmonton airfield helped move American bombers, fighters and transport planes through to Alaska and the Soviet Union, in what became a crucial program in the Allied war effort.

The Airport was closed in 2013 for development of the future Blatchford community. Hangar 11, under threat of demolition, made the 2017 National Trust for Canada’s Top 10 Endangered Places List. In 2018, heritage advocates pleaded the case for its preservation to City Council, and the City agreed to examine options for repurpose. 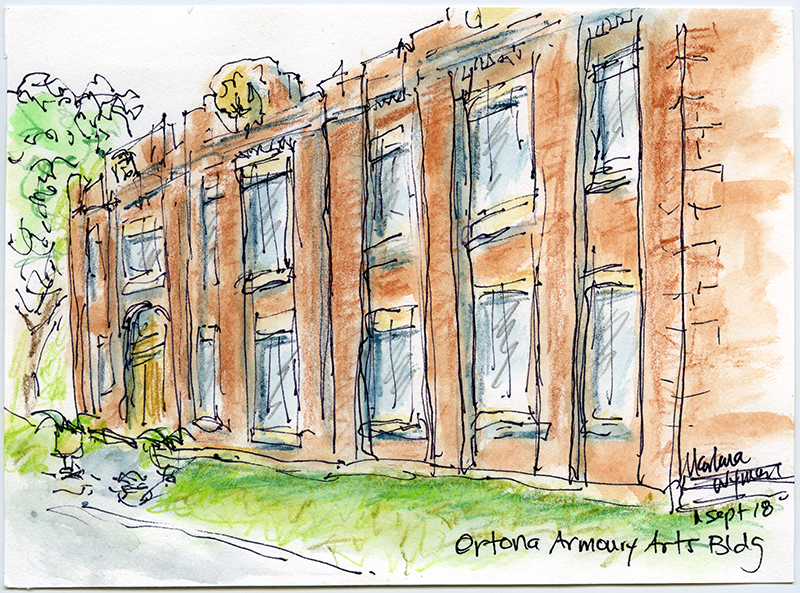 The Ortona Armoury is historically significant for two major layers of history: the Hudson’s Bay Company exterior and the Navy interior. It was built in 1914 by architect C.R. Sutherland for the HBC as a warehouse and stables. It also served other uses, including the Edmonton Pure Butter Company. 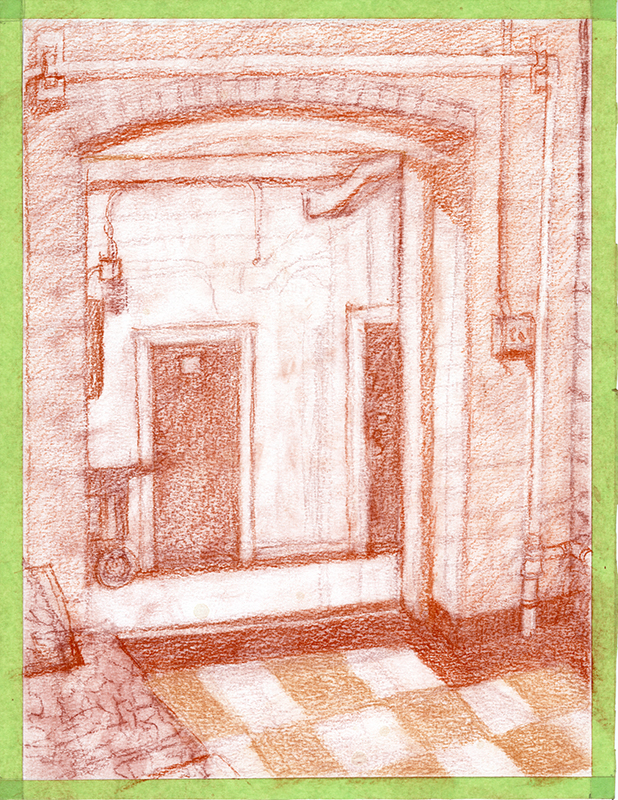 It was the headquarters of the Royal Canadian Navy Volunteer Reserves, one of the most active naval training facilities in Canada during WWII. In 1941, the building was commissioned the HMCS Nonsuch, and the Navy era floorplan and details have remained intact in the interior for 80 years.

By 1965, it became home to the Loyal Edmonton Regiment and was renamed the Ortona Armoury in honour of the regiment’s WWII battle. 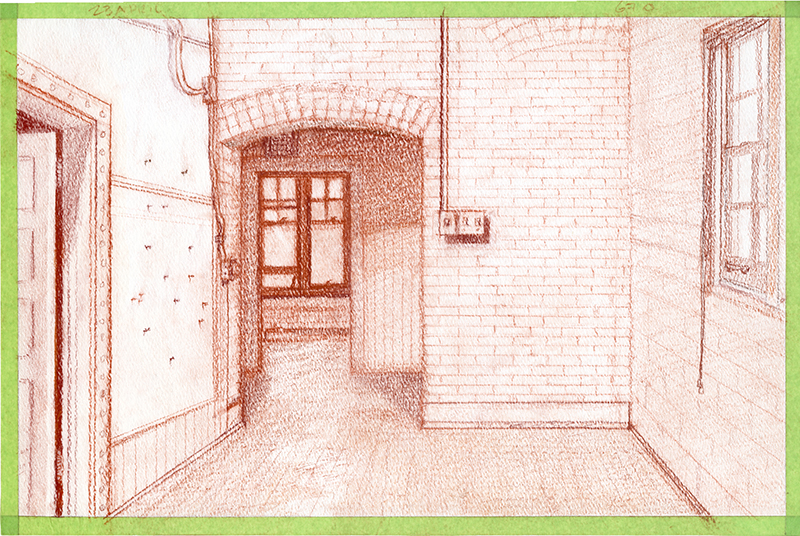 The City of Edmonton took over ownership in 1977, and it has become an arts building for the last three decades. Arts group tenants included the National Film Board, Edmonton Folk Fest, the Film and Video Arts Society, and Trincan Steel Orchestra. It also housed private studio space, the Ortona Gallery, and public arts space.

The Ortona was designated a Municipal Historic Resource in 2004. 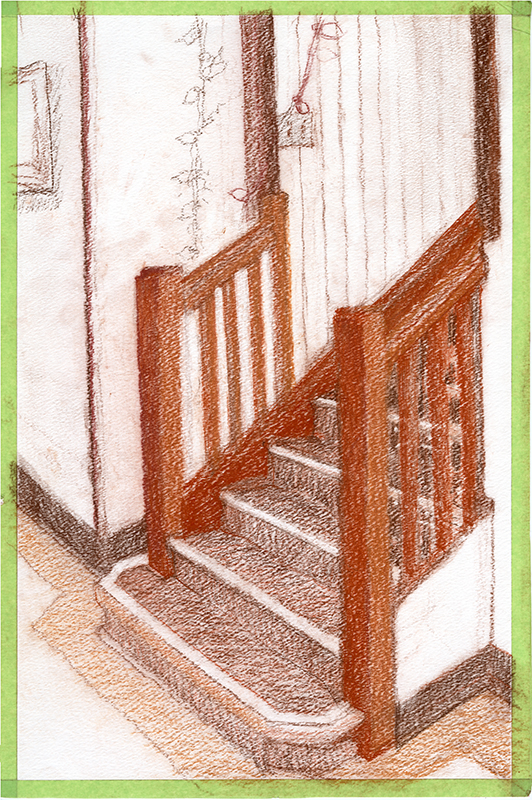 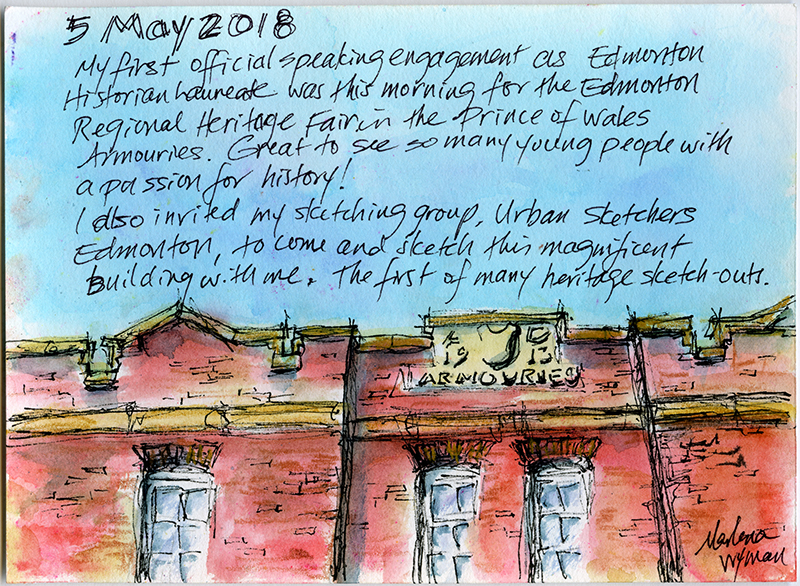 The Edmonton Drill Hall, as it was originally known, was completed in 1915 for the Department of National Defense. It served as a long-term training facility for Canada’s military and was integral to the organization and mobilization of the country’s armed forces. 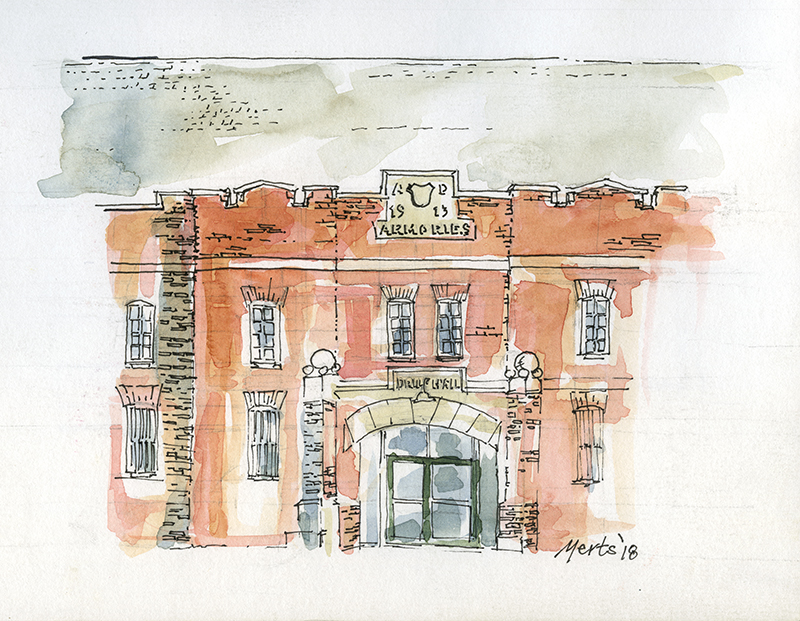 Designed by E.C. Hopkins, the first Provincial Architect, and D.E. Ewart, architect for the Federal Department of Public Works, it is an example of Baronial Gothic-style architecture, with stone arch doorways and distinctive corner turrets. The prominent central entrance archway opens to brick piers on either side, topped with sandstone cannonballs. Above the entrance the words “DRILL HALL" and "AD 1913 ARMOURIES" are carved in sandstone. The interior has a large side-gable roof with large, half-arched windows spanning its entire width. 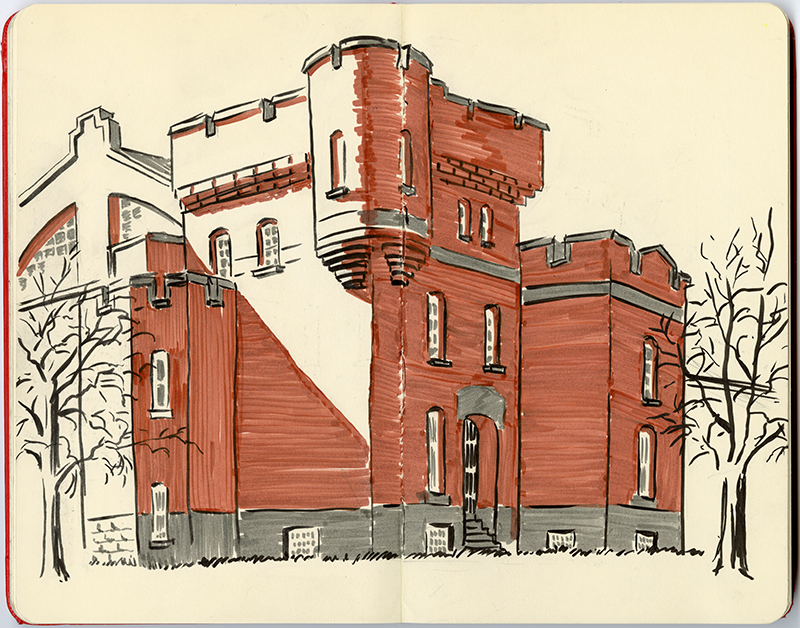 The building was renamed the Prince of Wales Armouries in 1921. The space, home to a number of prominent regiments, became the property of the City of Edmonton in 1977. In 1991 the building underwent restoration and renovation to house the City of Edmonton Archives. Other resident organizations include the Loyal Edmonton Regiment Museum, Edmonton Heritage Council, and Edmonton Arts Council; it also serves as event space. 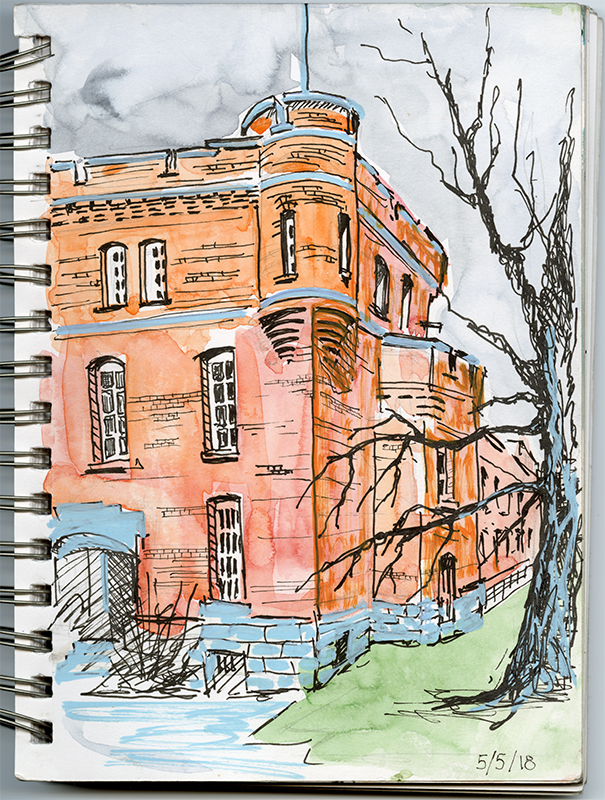 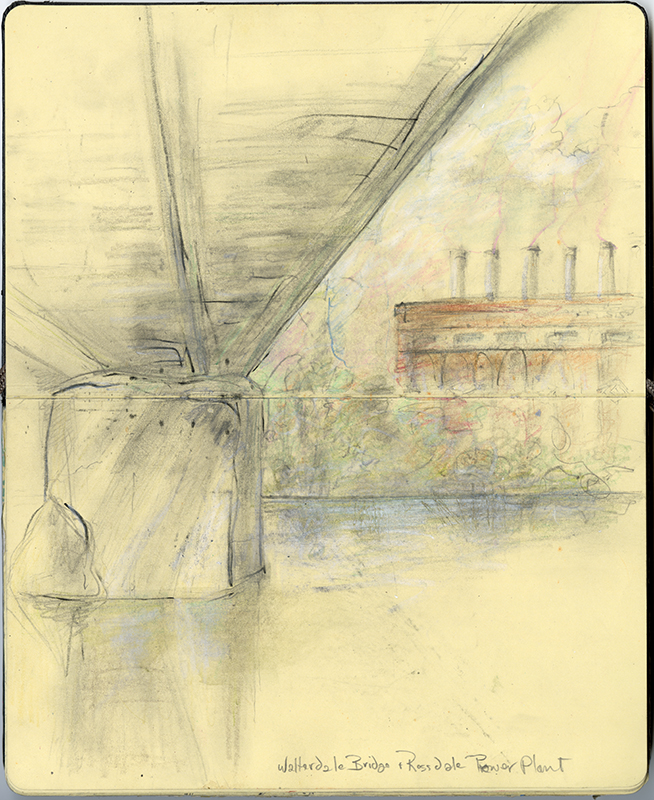 Rossdale Power Plant was constructed between 1930 and 1958 on the north bank of the North Saskatchewan River. The later additions were consistent in design to the original. The plant consists of three separate structures, The Low Pressure Plant, Pumphouse No. 1, and the Administration Building. In total these buildings take up 16.97 hectares of the river valley.

Maxwell Dewar, who later became Edmonton’s City Architect, was one of the designers of the plant, a curtain-wall brick and steel construction. The design reflected a contemporary shift away from traditional Victorian style architecture, instead taking inspiration from Albert Kahn’s innovative Ford Highland Park Plant in Detroit. Its style is unique in Edmonton. 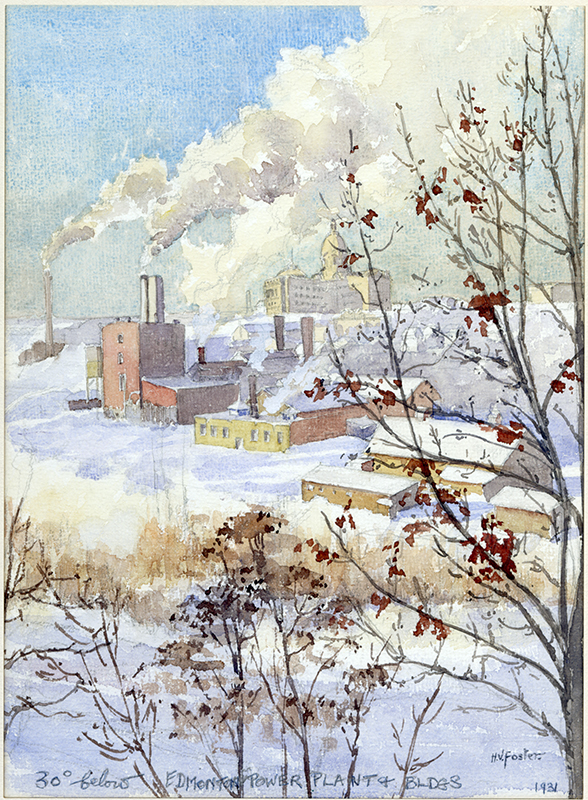 Additions made to the plant over the course of 22 years accommodated changing technologies and the shift from coal to natural gas. The two most significant structural changes made were the relocation of the plant’s controls from the Switch House to a location on the west side and the replacement of its original metal-framed windows with glass block.

The City of Edmonton continued to operate the plant until its closure in 1989. The Rossdale Power Plant was designated a Provincial Historic Resource in 2001. The City-owned buildings are familiar and significant landmarks in the city, but the fate of the decommissioned plant is still unknown. 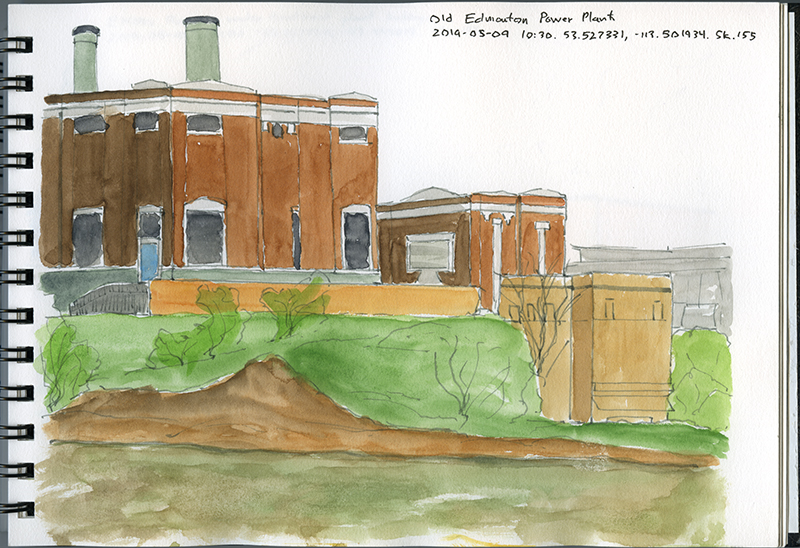 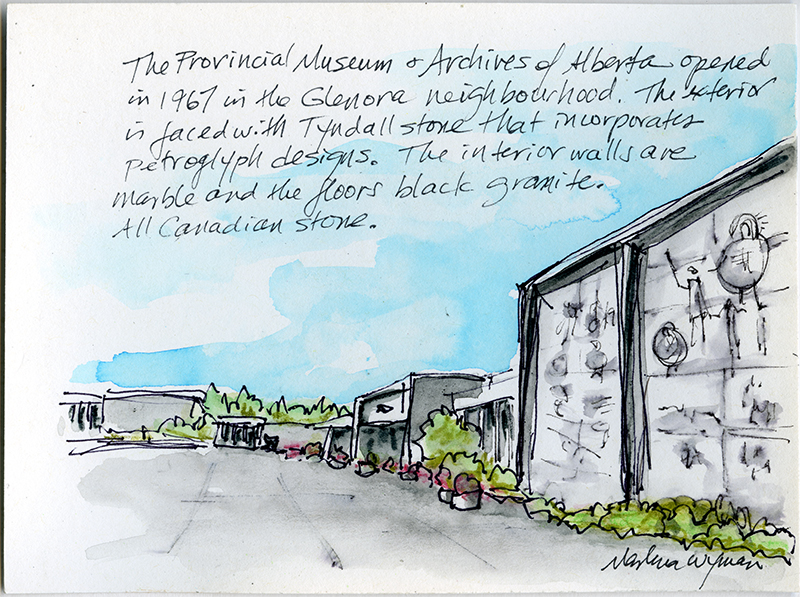 Provincial Museum and Archives of Alberta
Sketch by Marlena Wyman, no date

The Royal Alberta Museum in Glenora was built in 1965 and opened to the public in 1967. Originally named the Provincial Museum and Archives, it was made possible through a partnership between the Confederation Memorial Centennial Program and the Government of Alberta. An Australian museum professional, Raymond O. Harrison, was hired in 1962 to build the museum, locate staffing, and develop the exhibits.

The exterior is faced with Tyndall stone that incorporates petroglyph designs from the Writing-on-Stone Provincial Park site. The interior walls are marble and the floors black granite; all Canadian stone.

The original museum also housed the archives, and the museum galleries featured Fur Trade, Native Peoples of Alberta, Agriculture, Pioneer Life, and Industry & Commerce. Starting in the 1960s, the museum’s popular habitat dioramas were added at the rate of one per year until 1979.

In 2003 the Provincial Archives of Alberta moved to a separate facility. In 2005 the museum was designated the Royal Alberta Museum by Queen Elizabeth II when she visited for Alberta’s 100th anniversary. The original building closed its doors in 2015 to focus on the construction and move to the new downtown location of the Royal Alberta Museum that opened in 2018.

The provincial government is presently seeking ideas for the continued use of the Glenora building.

The Sprucewood Branch of the Edmonton Public Library was opened in 1953, the first branch after the Central Library to be built north of the river.  The Branch continues to be an active, well used and vibrant community centre. It underwent a major renovation in 2004 adding a much needed programming room that could be used by the public outside of branch hours. Today Sprucewood is one of 22 branch locations operated by the Edmonton Public Library.

The Edmonton Public Library system had its humble beginnings in 1913 above a meat market and liquor store in the Chisholm Block downtown. In 1923, after moving to several other temporary spaces, local architects H.A. Magoon and G.H. MacDonald were hired to design the elegant Central Library on Macdonald Drive. In 1967, the Centennial Library, later named the Stanley A. Milner Library, opened a few blocks away and the Central Library was demolished in 1968. The renewed Stanley A. Milner Library will open in 2020.