Sacred spaces are special. They have meaning beyond their functional characteristics. They can include cemeteries, places of worship, and physical landscapes. They are places of contemplation, reflection, and community.

Edmonton has many sacred spaces, as diverse as the people who make up our community. By examining our sacred spaces, we learn about our past, but also our present. They are a bridge between our history and the contemporary realities we face as a city.

Al Rashid, the first mosque in Canada, was built in 1938. The highest concentration of Muslims in Canada at the time was in the west and Edmonton was home to the largest Muslim community. Amid concern about preserving and passing on their faith and traditions to their children, local Muslim women, most notably Hilwie Hamdon, led the proposal and fundraising to build the mosque. An Edmonton Public School has been named after Hamdon. The mosque bears some resemblance to the style of a Russian Orthodox Church due to the hiring of a Ukrainian-Canadian builder, Mike Drewoth. 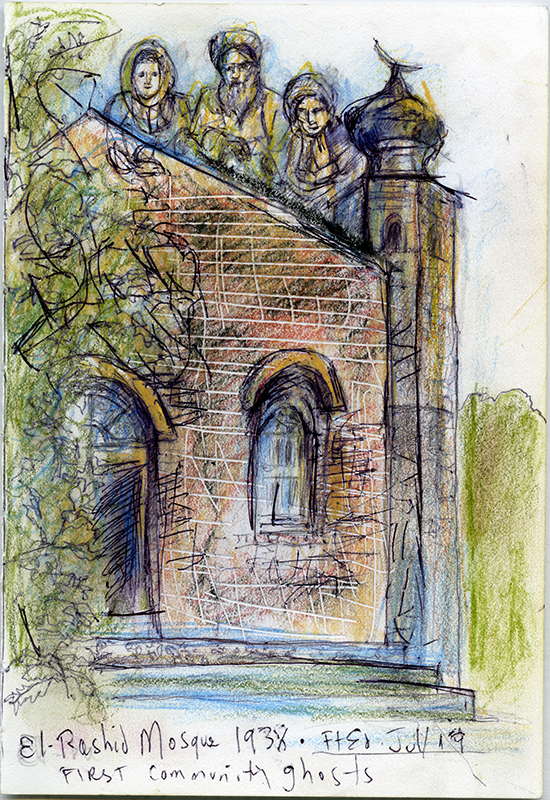 Al Rashid Mosque was built on the corner of 101 Street and 108 Avenue, but was relocated to 102 Street and 111 Avenue in 1946. In 1975, a new, larger mosque was built and by 1988 the original mosque was under threat of demolition. Local Muslim women again led a proposal and fundraising to move the mosque to Fort Edmonton Park, where it was formally opened in 1992. 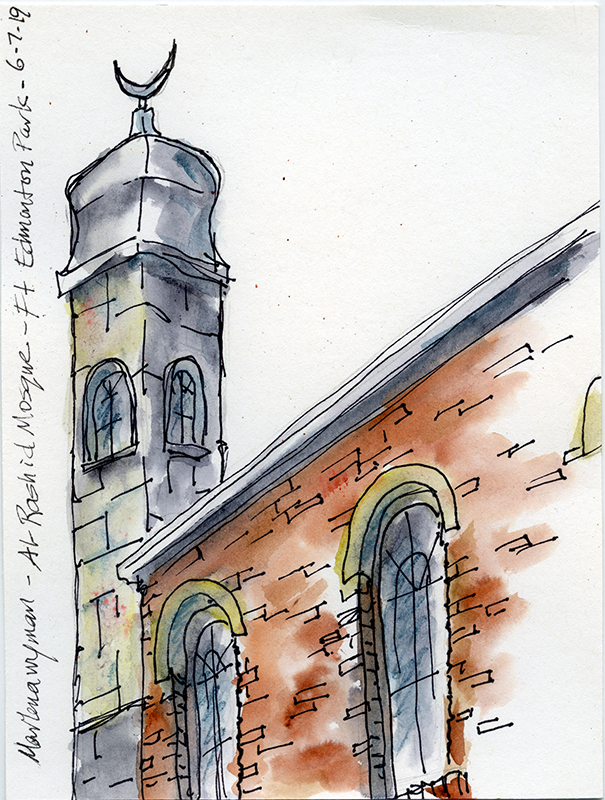 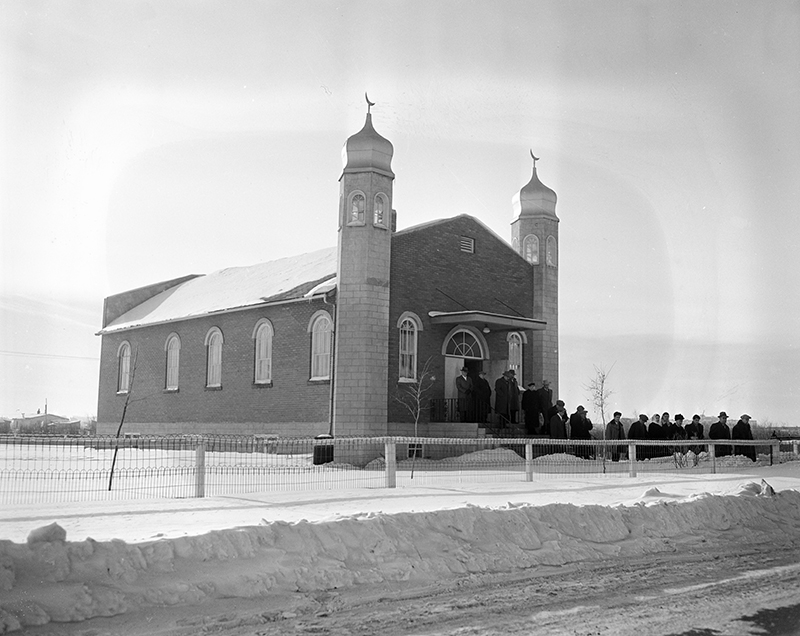 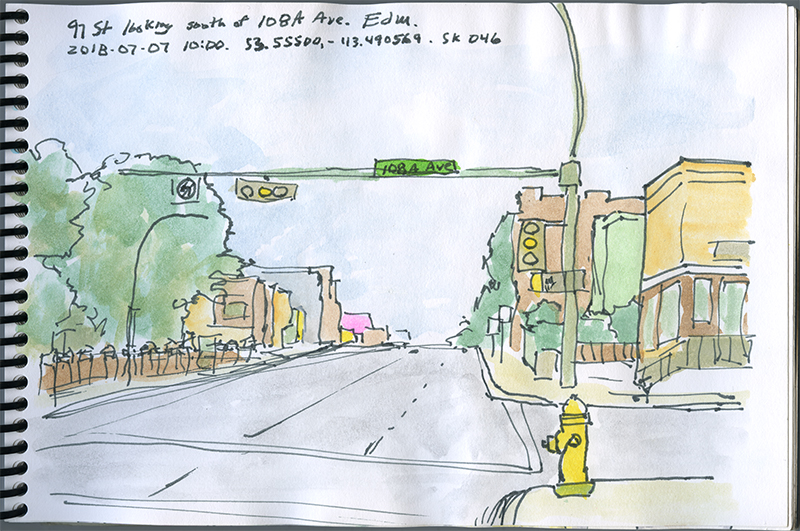 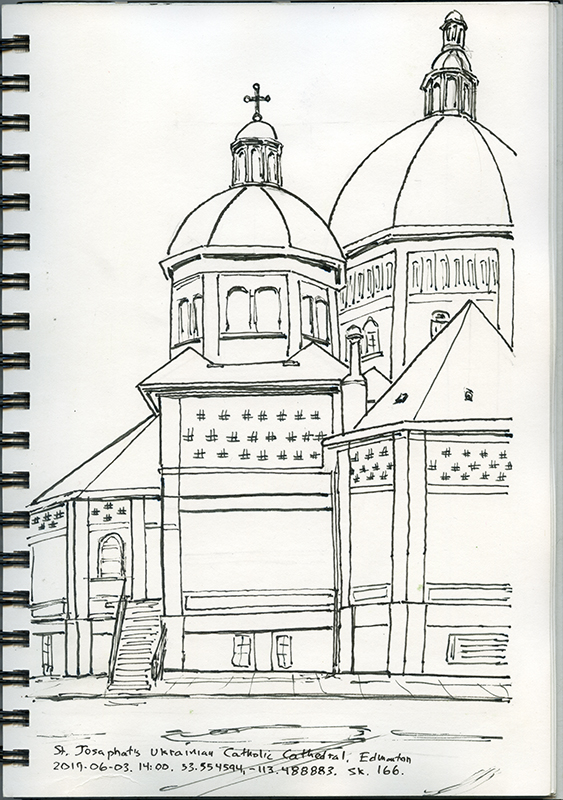 In 1939 construction began on St. Josaphat Ukrainian Catholic Cathedral, designed by architect and Oblate priest Reverend Philip Ruh. Almost all labour was donated by parishioners and the building was completed in 1944.  Since the church was developed in part to celebrate the 950th anniversary of the Christianisation of Ukraine, in keeping with the Byzantine Rite it was erected in the shape of the cross with seven cupolas, the largest of which reaches almost 100 feet in height.

On June 3rd, 1947, His Eminence Eugene Cardinal Tisserant of Rome officiated at the dedication of the church. He was assisted by Most Reverent Neil Savaryn who would be appointed the first Ukrainian Catholic Bishop of Alberta and British Columbia in 1948. This officially elevated St. Josaphat from church to cathedral. 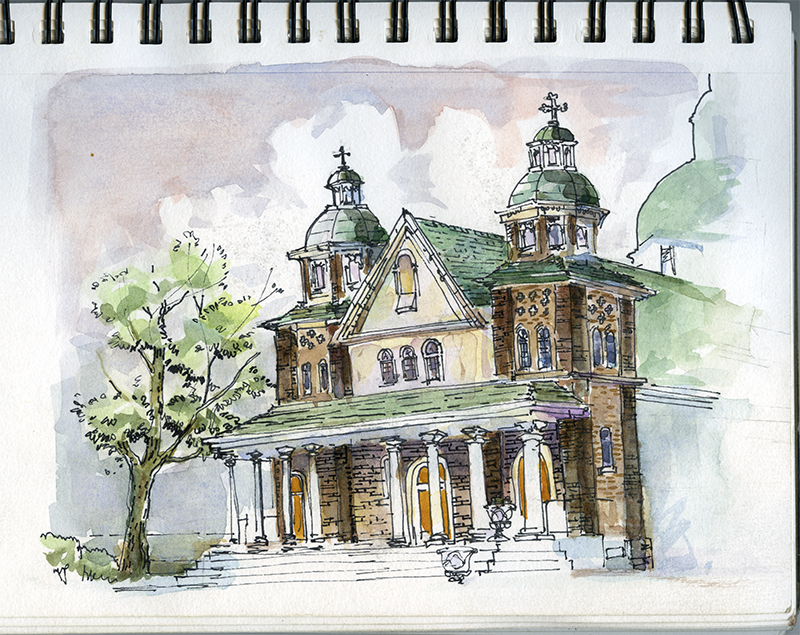 St. Josaphat is considered one of the best examples of Ukrainian-Canadian church architecture. Representative of Ukrainian Baroque as well as Byzantine traditions, the building features dramatic cupolas, yellow brick cross designs, and a distinctive polychromatic exterior. 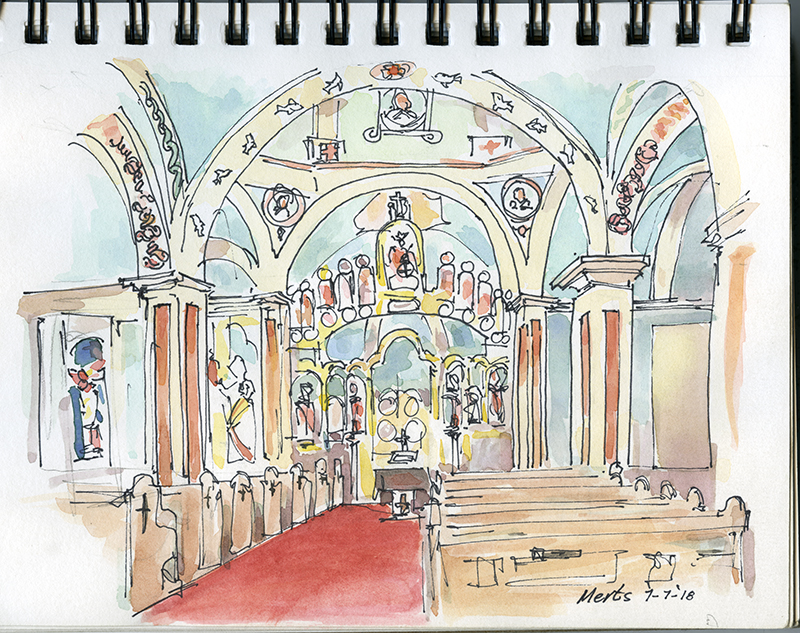 Painting of St. Josaphat interior murals began in the 1950s by prominent Ukrainian muralist Julian Bucmaniuk and his son, known for vibrant, traditional Byzantine iconography. The cathedral was designated a Provincial Historic Resource in 1983. 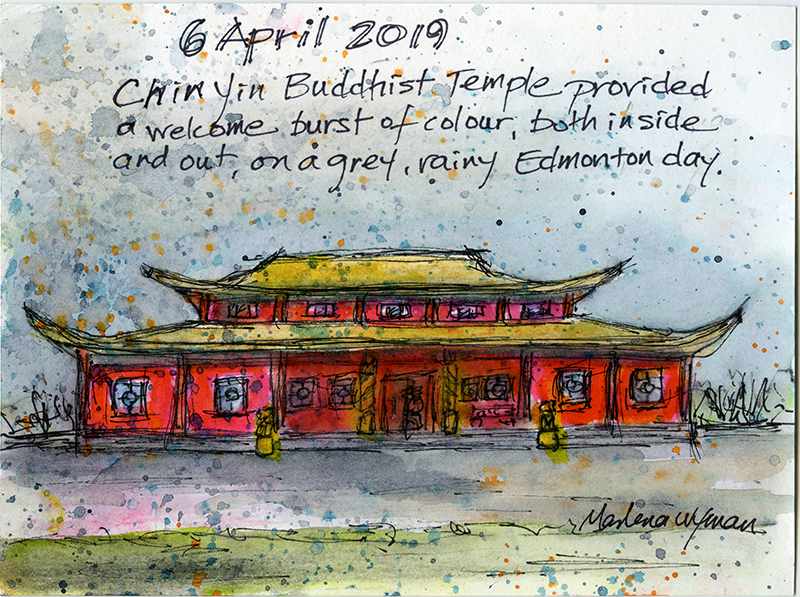 Buddhism is a part of Edmonton’s history of rich and diverse spiritual life. Although the present Chin Yin Buddhist Temple was built in 2002, it is based on the ancient Buddhist pagoda architectural style. The main floor interior of the temple is abundantly decorated with traditional Buddhist sculptures, wall hangings, lanterns, and colourful decorations and offerings. The basement houses the quiet and meditative columbarium rooms.

The True Buddha School - Chin Yin Buddhist Society was incorporated in Edmonton. It is one of the largest Buddhist communities in the city, and has chapters around the world. All are welcome at the temple, and prayers are offered are in English and Chinese (Mandarin and Cantonese). 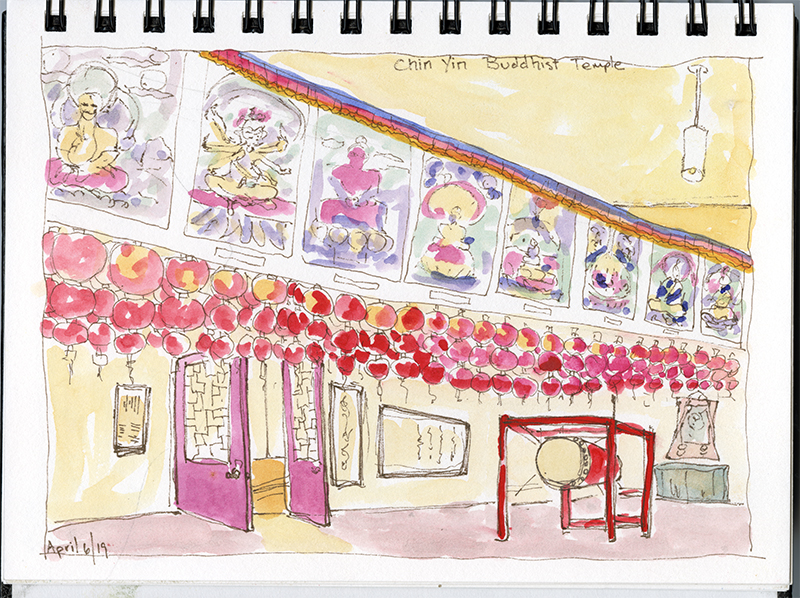 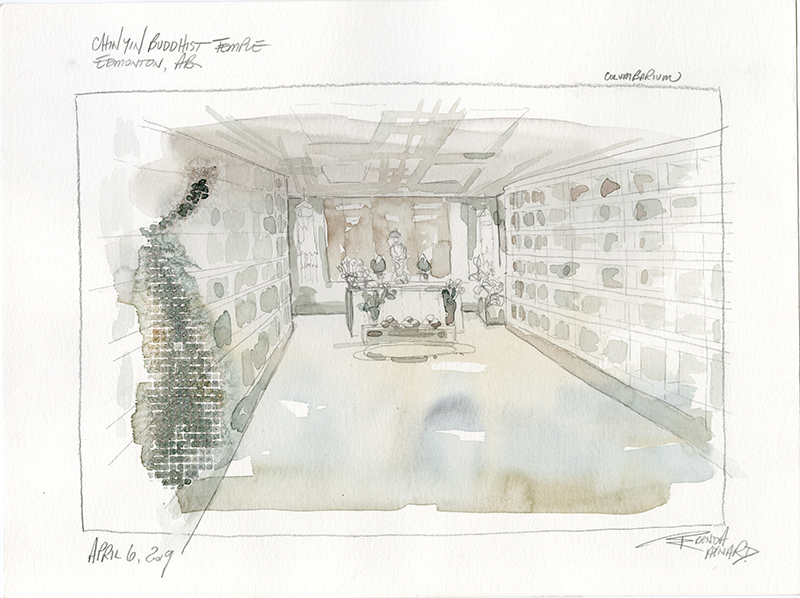 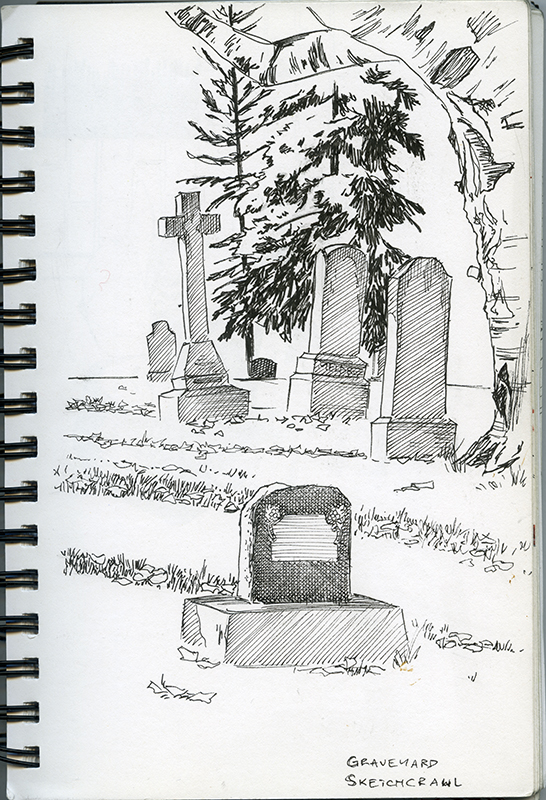 Many of Edmonton’s original settlers and founders are buried here including the Griesbach family, Muttart family, Wilfred “Wop” May, James Rowland, Hon. Dr. John Campbell Bowen, and Ernest Brown. The Military Field of Honour was established here in 1922. 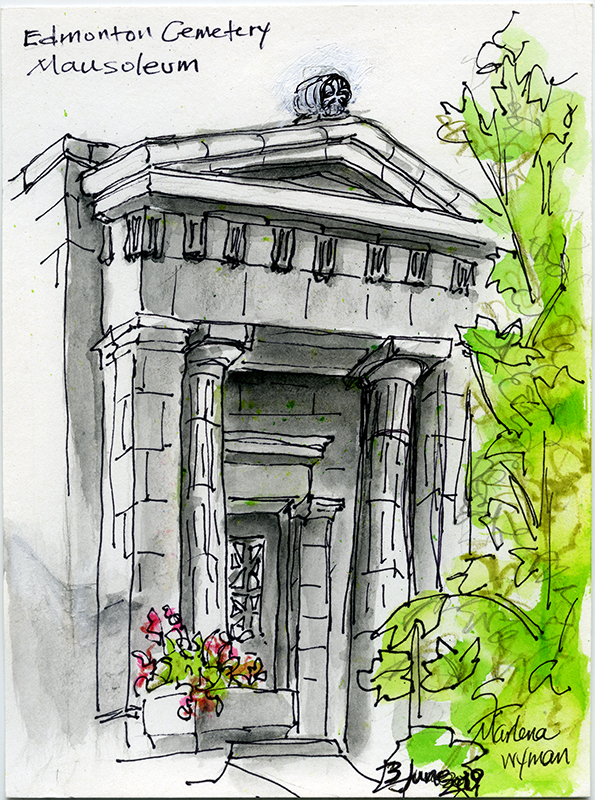 The Cathedral of Memories Mausoleum, in which Emily Murphy is buried, is located in the north-central area of the cemetery. It is a stone structure built in 1930 in classic Greek Doric architectural style. The interior houses both niches and crypts and features cathedral stained-glass windows. 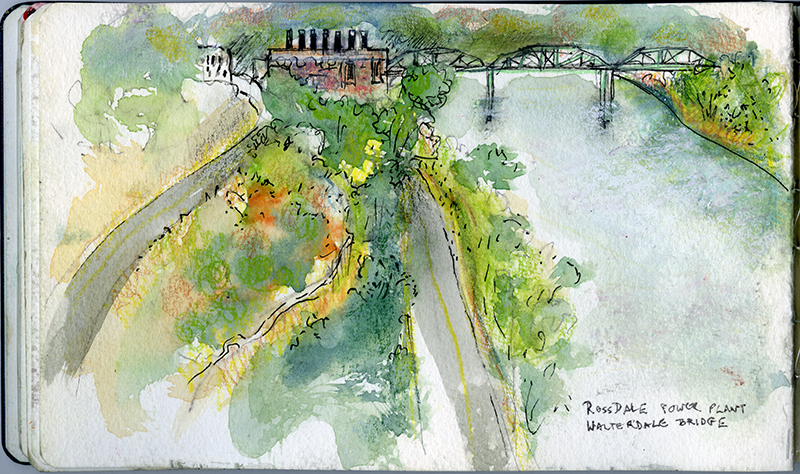 After the first election of the newly formed Papaschase Band council in 1999, it became involved with Indigenous activists lobbying to protect a burial ground in central Edmonton at the site of the Rossdale Power Plant operated by EPCOR. Stakeholders protested the power company’s planned expansion; as had happened throughout the history of the plant’s development, human bones had been found on EPCOR’s property in May and October 2000. The 2000-2001 Energy Utility Board hearings halted the expansion to protect historic buildings on the site, which also meant protecting the burial grounds. EPCOR was unable to dig in the area without an Archaeological permit. 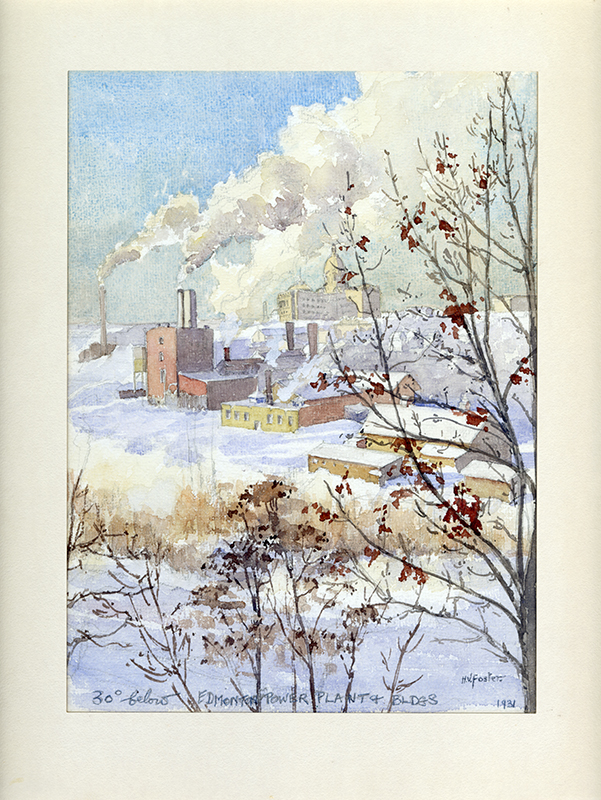 After the hearings, Indigenous, Métis and French activists approached then-Mayor Bill Smith to discuss how representatives of the City could work with the various stakeholders committed to recognizing the burial grounds. Since then, a portion of Rossdale Road that ran over the burial ground has been closed and rerouted. Human remains that had been held at the Medical Examiner’s office and the University of Alberta’s Anthropology Department were prepared for reburial. The ceremony took place at the site on August 28, 2006 attended by hundreds of descendants, City officials, Minister Pearl Calahasen, clergy and spiritual leaders. Bylaws have been changed and rezoned, and the site is now legally a historic cemetery/burial ground protected by law. 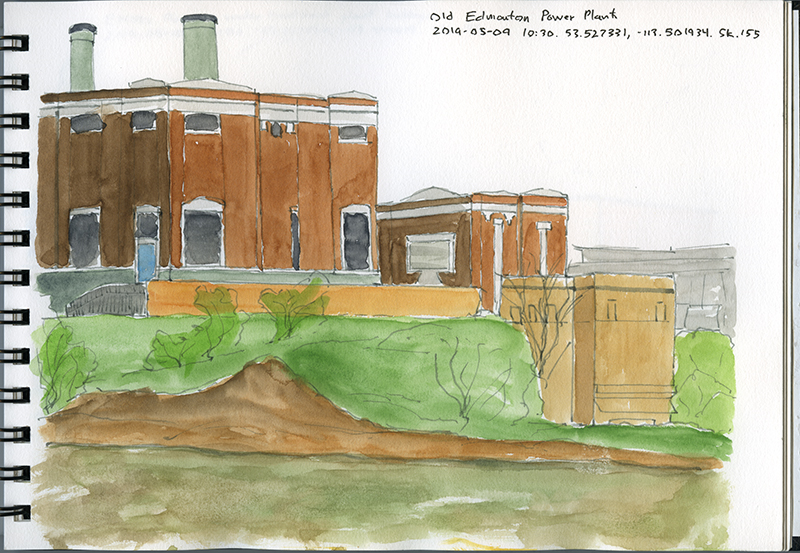 At the reburial ceremony, Chief Rose Lameman and Councillor (now Chief) Calvin Bruneau confirmed that the Papaschase band had at least 31 members who were buried at the burial ground/cemetery. Councillor Joyce Bruneau’s research is continuing to determine whether more Papaschase ancestors were buried there.

Planning for a memorial for the Traditional Burial Grounds and Fort Edmonton Cemetery brought together the descendants, other stakeholders and volunteers, the City of Edmonton and EPCOR. More commonly known as the Rossdale Memorial, it was commissioned by the City and completed by Manasc Isaac in 2007. The memorial incorporates design elements that reflect the values and heritage of the individuals buried at the sacred burial ground and seeks to bring healing to the pain, frustration and mistrust felt by the descendants of those buried there. A significant piece of Edmonton’s history, it is significant not only as a once-forgotten, desecrated First Nations burial site, but an early site of the HBC Fort Edmonton fur trading post, and burial site for Métis and non-indigenous Fort inhabitants also buried here. 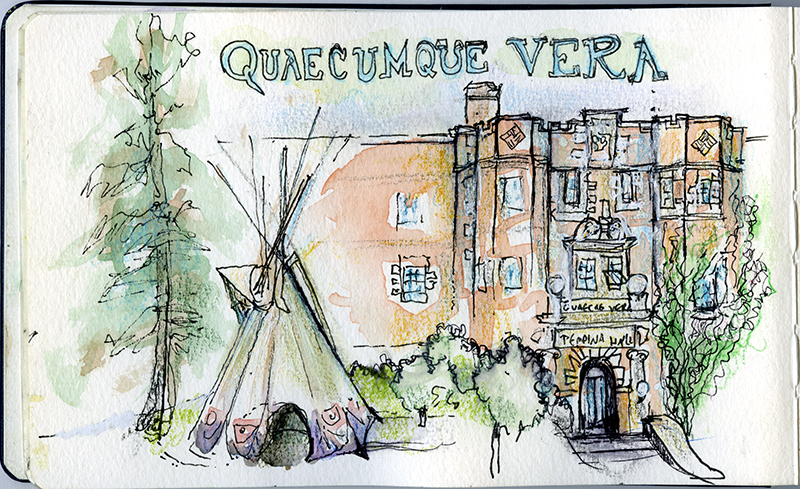 The history of Papaschase is the history of Edmonton.  Although the built heritage that we have sketched for this exhibit came to be within the last century, it is vital to remember that the history of the land on which these buildings sit reaches back much further.

Chief Papaschase, his six brothers and their families moved to the Edmonton area in the late 1850s from the Lesser Slave Lake area. By 1879, the buffalo had become virtually extinct and the Indigenous peoples in the Edmonton area were starving. The Federal Government did not provide necessary relief to the Papaschase or other bands as promised under the terms of Treaty 6.

On August 21, 1877 at Fort Edmonton, Chief Papaschase and his brother Tahkoots, a Headman, signed an adhesion to Treaty 6 on behalf of the Papaschase Band. That same year, surveyors for the Department of Indian Affairs laid out reserves for the Edmonton bands. However, the Papaschase Reserve No. 136 was not established until 1880, within the present boundaries of the City of Edmonton.

Chief Papaschase argued that its size would be inadequate to support 249 band members, and a dispute arose between him and Inspector T.P. Wadsworth of Indian Affairs. Wadsworth then maliciously transferred 84 members of the Papaschase Band to a new treaty pay list he created for the “Edmonton Stragglers” who were excluded from an even smaller reserve.  Wadsworth paid annuities to only 188 of the members of Papaschase.

As federal Minister of the Interior, Frank Oliver, through his newspaper the Edmonton Bulletin, advocated for settlers who objected to the reserve’s location near Edmonton. Petitions were sent to Prime Minister John A. Macdonald to obtain a surrender of IR 136 for sale to non-Indigenous people.

In 1885, the Half Breed Scrip Commission extended scrip to include treaty status Indigenous people in the Edmonton area. All recipients of scrip lost treaty status, interest in reserve land, and rights to treaty annuities. In 1886, the Papaschase Band took scrip, motivated by starvation, poverty and the government’s failure to honour the terms of Treaty 6, and in the honest belief they could occupy IR 136. A total of 102 members of the Papaschase Band received scrip and the band was reduced to 82 members.

In 1887, Assistant Commissioner Reed moved the remainder of the Papaschase Band to the Enoch Reserve, and some went to other bands in areas such as Elinor Lake, Lac La Biche, Beaver Lake and Kikino. The Papaschase band denied relinquishing their rights and informed Reed they did not understand the meaning of the language contained in the declarations.

The Métis story in Edmonton intertwines with the Papaschase story.  The following has been condensed from an article by Jan Olson.

By the 1870s, the Métis were the first permanent settlers of the Edmonton and Strathcona areas. Louis Garneau, who left the Red River settlement during the Riel Rebellion, and other families not connected to the Papaschase band, lived in the southwest area of Edmonton. Those who settled in the southeast (now 99th Street) were more closely connected to the Papaschase Band.

These Métis worked with the Papaschase Band to make a land claim under the Indian Act in the hope that it would help the Métis to remain on their land and the Papaschase to achieve reserve status and retain control over their own land. When this claim failed, the southeast Métis were not part of a recognized reserve, nor did they have a secure title to their lands. Some joined the Edmonton Stragglers in an attempt to preserve their land. This strategy also failed and they lost any right to the land that they had been working. The claims process would become one of the most flawed and corrupt of policies directed towards Indigenous peoples. Most of these Métis families were no longer in the area by the early 1880’s.

At this time the Canadian government was passing out Métis scrip, certificates redeemable for either land or money. The Métis sold their scrip, often at half its value, to land and scrip speculators. Almost all of the transfer of wealth on the southeast side of the river was made under deceitful and unethical circumstances.

A related story about Métis in the Edmonton area involves entrepreneurs John Alexander McDougall and Richard Henry Secord. The following is a condensed version of the article by Rob Houle.

In 1883, Secord and McDougall established themselves as purveyors of furs, mercantile business and land holdings. To the detriment of the Métis, who at the time did not fully comprehend the system, traders like McDougall and Secord took advantage of the Métis scrip commission system to establish a lucrative industry. They and others purchased the certificates and re-sold them for profit. Once sold, unbeknownst to the Métis, their claims and rights would be extinguished in the eyes of the Crown.

A stipulation of the Scrip system was that certificate recipients must be present at a Dominion Lands office when redemption of the certificate took place. It soon became common practice to hire impersonators for a small payment, who would sign over ownership to speculators and swindlers.

The history around these claims, like many other areas of Indigenous experience, would fade behind the dominant narrative of prominent Edmontonians.