The Byron-May Company was operated by Percy Byron and Gustav May. These professional photographers were active in Edmonton between 1906 and 1917. During this time they produced thousands of images that documented life in Edmonton and the surrounding area that illustrated the growth and development of the city as well as the successes of those who lived there. At their height the company employed 10 people, and their work was featured in major publications by clients like the Edmonton Bulletin and the Edmonton Board of Trade. 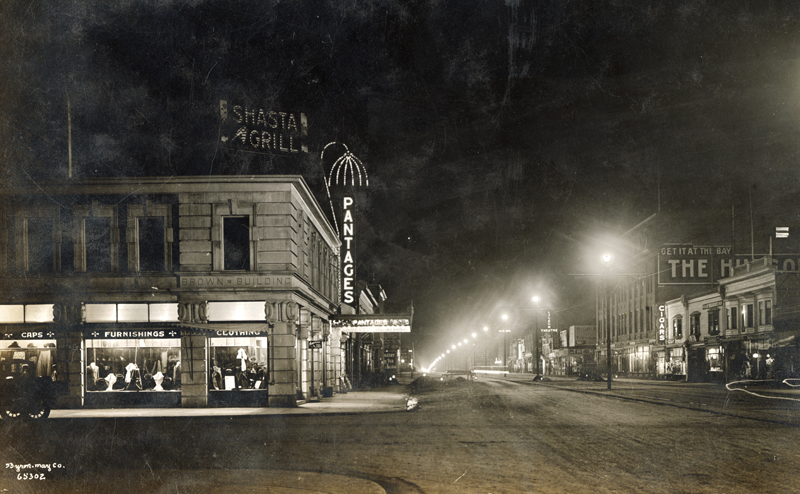 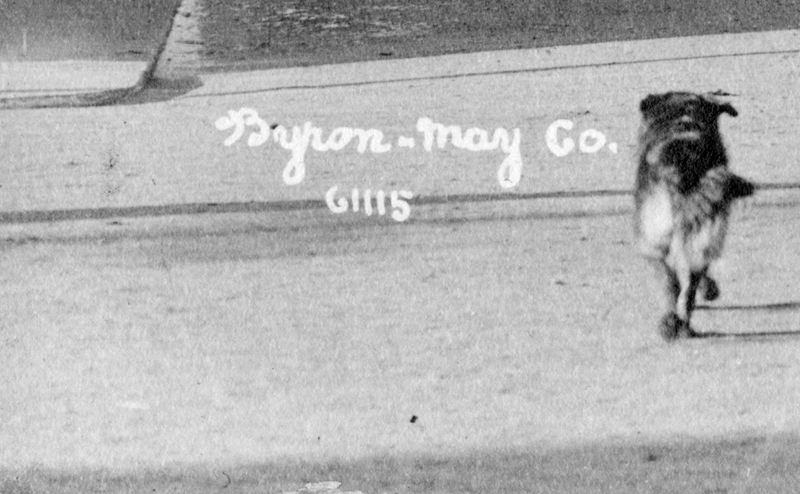 Edmonton Board of Trade Album 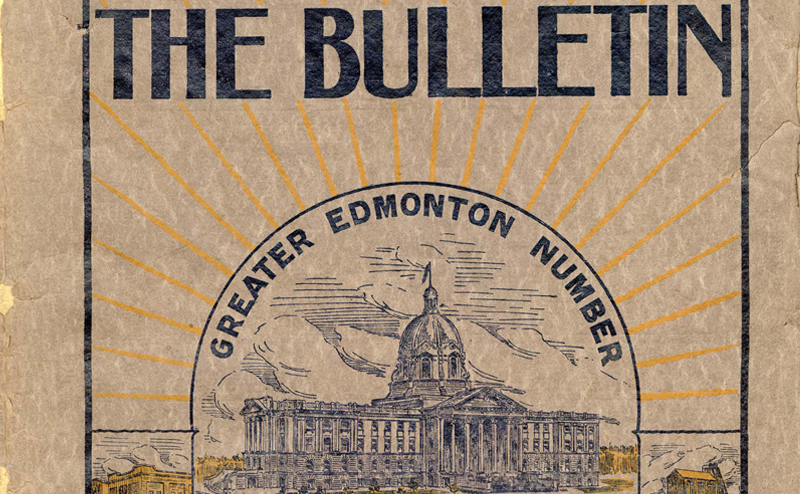 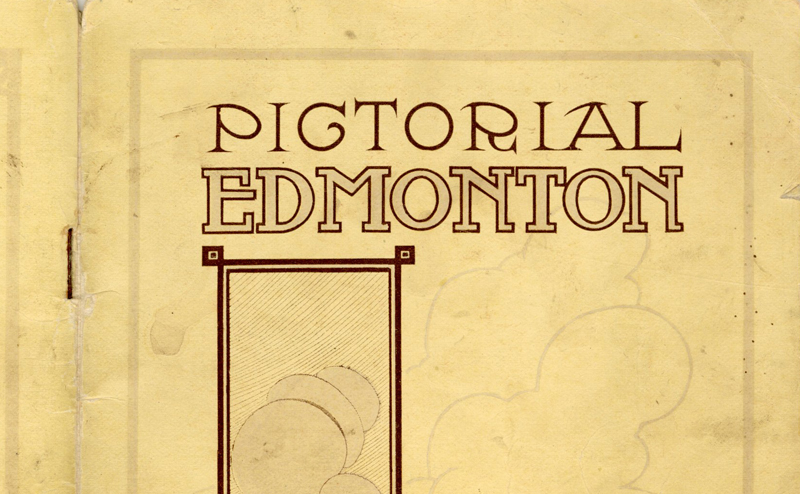 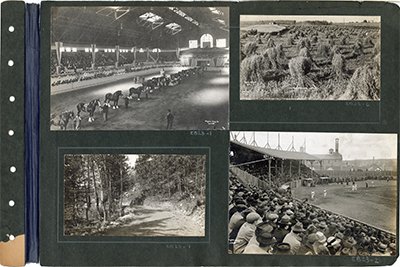 This album contains 121 images taken by Byron and May. Many of the photographs were part of their business, including commissioned images. The album also includes photographs of the Percy Byron and Gustave May families. Many can be found individually described on the Archives' online catalogue by searching the EB-23- number written below the photo.

The following year, Percy’s brother-in-law, Gustave May, joined him in Edmonton and the Byron-May Company was formed. The photography and photographic engraving business was quite successful for the next decade, enjoying many commissions and professional accolades.

Florence Byron, Percy’s sister who had married Gustave May in 1905, joined him in Edmonton with their infant son, Joseph. Percy Byron married Louise Marrin in 1908 while on a visit to New York and his wife also came to Edmonton. Both families enjoyed prosperity and success in Edmonton. Florence and Gustave May had three more children. Percy and Louise Byron had four children in Edmonton.

However, the Byron-May Company fell on hard times with the coming of World War I and the business was sold to McDermid Engraving in 1917. Both the Byron and May families returned to New York the following year. 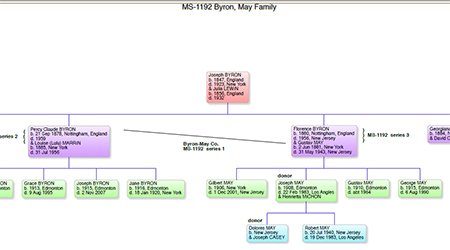 This family tree represents the various branches of the Byron and May families, as well as how they relate to the various series in the Archives’ Byron, May Family fonds. 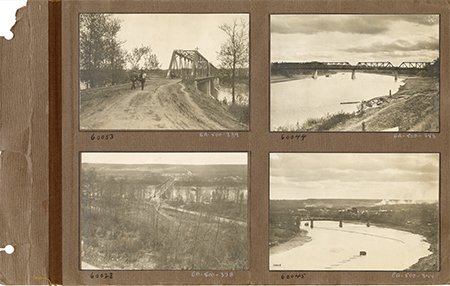 This photo album consists of 60 pages of photographs taken by Byron-May for the Edmonton Board of Trade to promote Edmonton in the early twentieth century as an up-and-coming city. 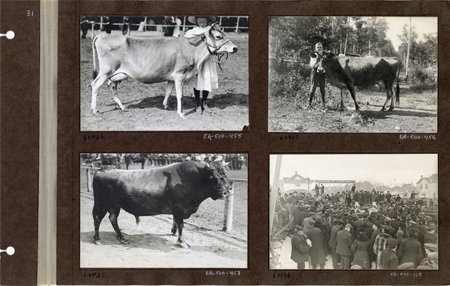 The Edmonton Board of Trade, a community-based volunteer organization, was established in February 1889 to promote practical growth opportunities to support and enhance the prosperity of Edmonton’s business community with the goal of attracting settlers to the district. At the time of the Chamber's formation, Edmonton's economy was more rooted in agriculture than energy. It was renamed the Edmonton Chamber of Commerce in 1928, retaining its mandate of contributing to the growth and development of Edmonton and its business community.

Many of these images can be found individually described on the archives’ online catalogue by searching the EA-500- number written below the photo. 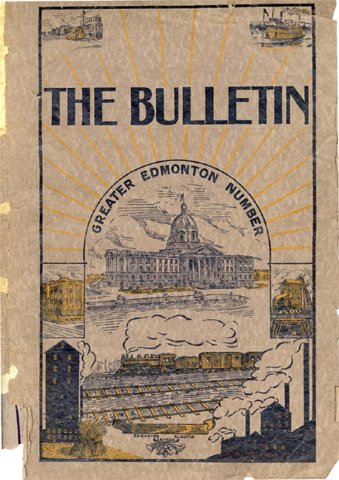 The Edmonton Bulletin hired advertising specialist C.A. Violette of San Francisco to conduct an advertising campaign to create this Special Edition which was used to promote Edmonton as an up-and-coming city. It includes descriptions of businesses, businessmen, and industries, as well as descriptions of the social, economic, military and artistic scenes in Edmonton and the greater Edmonton area. All of the photographs used in the publication were created by the Byron-May Company (EB-26). 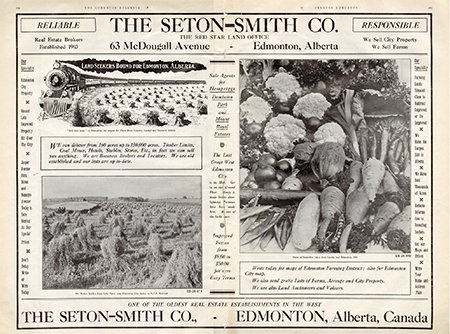 By the time this special edition was released the Bulletin’s relationship with Byron-May was well established. The first photo ever published in the Bulletin, in 1906, was produced by Percy Byron! 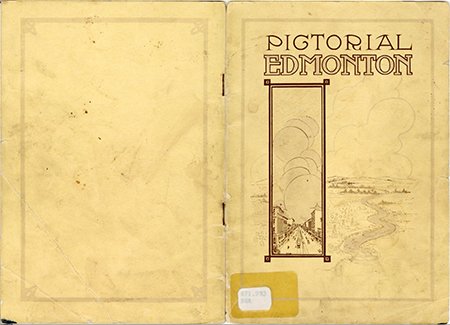 “This booklet is made for the purpose of placing Edmonton’s progress and possibilities befor the public in pictorial form – the best way to present a story – because it is concrete, pleasing to the eye and possible to perceive at a glance.

We have tried to use our large stock of pictures – the fruits of much work and close application of our business – and all of the forces of our establishment, to the best advantage in producing this photographic presentation of the progress and push of this, our city of Edmonton. The work has been cordially received by the business men of Edmonton to whom it has been presented, and we venture to hope that its wider circulation will bring nothing but pleasure, profit and instruction to those who receive it.”

This bibliography is designed to situate the records used in the Byron-May Co. virtual exhibit in their larger context. It shows where these disparate records come from by grouping them by creator rather than by subject.

Wherever possible, links to catalogue entries in our online catalogue have been included. We also have some further catalogue information in our reference room.

For an explanation of terms and acronyms, see our Virtual Exhibit Glossary.

Records Used in Byron-May Video (in order of appearance)