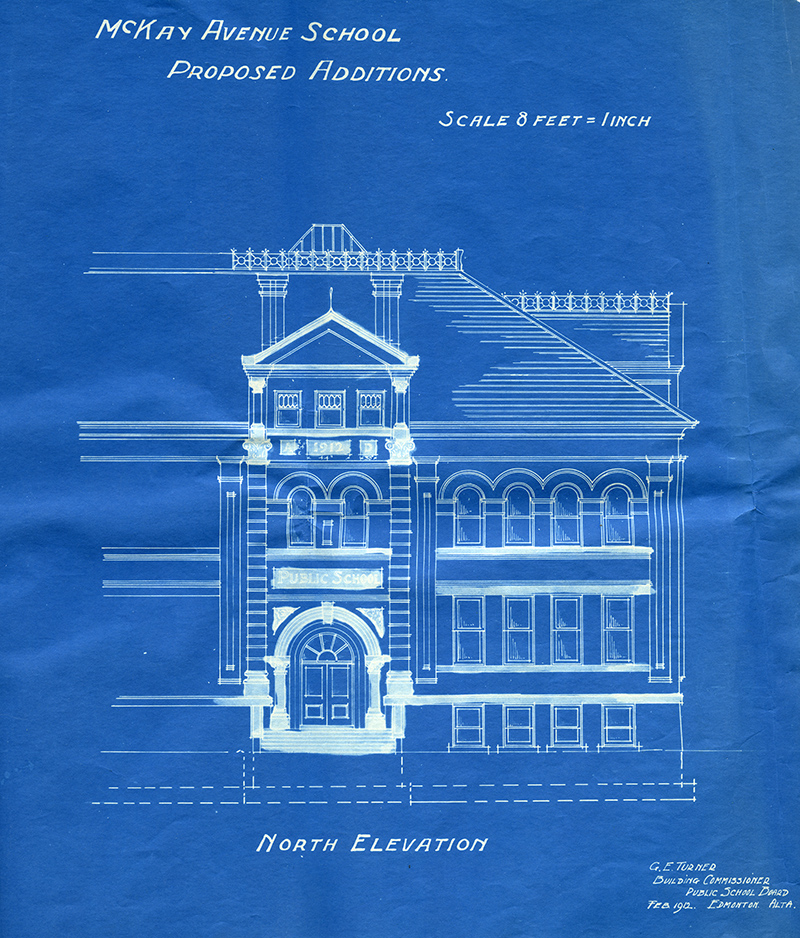 Architecture and design have long been used to create a sense of place. They give a community identity. As a budding frontier settlement, Edmonton was no different. Starting with a simple wooden schoolhouse, the design and architecture used by Edmonton Public Schools evolved as quickly as the community. In the early 1900s, many Edmontonians wanted their buildings to reflect their grandiose image for Edmonton. The community’s permanence was reinforced by making use of local brick and stone, and by building on a large scale. Classical architectural details helped instill a sense of pride and accomplishment. Finally, the modern conveniences in the schools were promoted as a way to draw people to Edmonton.

At first architects were hired to work on the schools, including a number of notable firms responsible for many other large projects in Edmonton. However, to keep up with the city’s staggering growth, the position of Architect and Building Commissioner was created, and the designs were done in-house by George Turner.

George Turner moved to Edmonton with his wife Lizzie in 1908. He worked a short time for local architect Alfred Merigon Calderon before being hired as Building Commissioner for Edmonton Public Schools in 1909. During his time in this position he designed nearly twenty schools, many of which still exist today. Turner resigned in 1914 to pursue private practice, shortly before the School Board’s ambitious building program ended.

“Let the School building, then, be well planned, solidly constructed, thoroughly fireproof, abundantly lighted, with adequate straight corridors and ample stairways, let it be well ventilated and cheerful within, and refined and dignified without, and it will be a source of pride to the community, as well as a credit to its designer.”
George Turner, 1914

Full PDF of George Turner’s paper on the design of grade schools, presented to the Alberta Association of Architects, January 1914. [PDF of EPSB Archives and Museum 84.2.276]