The new pedestrian bridge is expected to open in fall 2023. 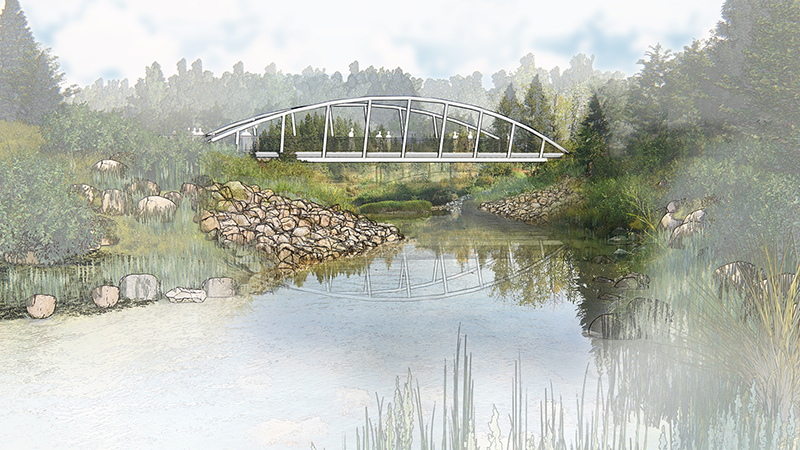 Construction of the new bridge is underway. Piling work (drilling foundations) was completed in December. Demolition of the existing bridge structure is underway, starting with the deck removal.

The new bridge is going in the same location as the original bridge, which will reduce impact on the existing vegetation and better tie into the existing trail network. Once construction has been completed, the site will be restored to match the surrounding natural areas of the Whitemud Creek ravine.

See the  Questions and Answers for more information.

Please be aware that this is an active construction site. Please respect the signage and the temporary fencing in place.

You can find alternative accesses to park trails on the online River Valley Trail Map.

The Smith Crossing Pedestrian Bridge, located along 23 Avenue, provides access to the MacTaggart and Larch Sanctuaries within the river valley system. The existing bridge was built in the early 1900s and has reached the end of its service life.

A new bridge will be designed and constructed to replace this pedestrian crossing over the Whitemud Creek. The new bridge will be near the existing bridge location to reduce environmental impacts and to retain the trail connections. 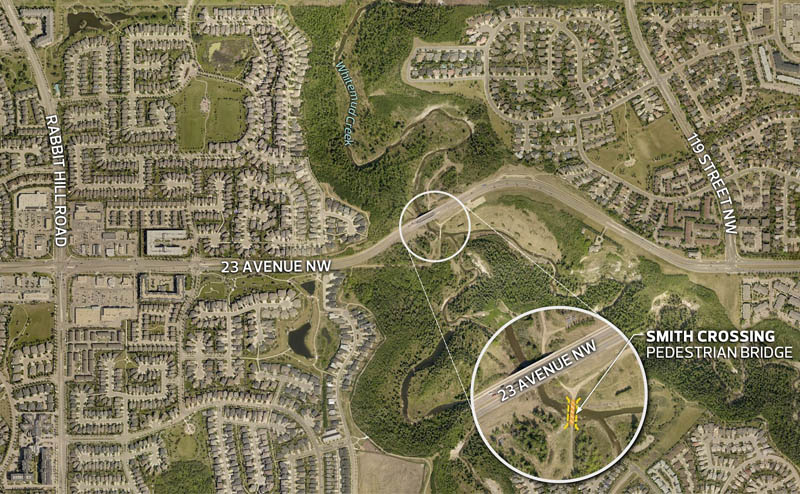 An online information session was held on November 3, 2022 to provide details about the construction work.

An online information session was held on Thursday May 20, 2021 to provide details about the preliminary design of the pedestrian bridge replacement. Topics discussed include:

If you were unable to attend, please watch the presentation recording and review Questions and Answers from the event.

Stakeholder and public engagement has been ongoing since the start of this project. Identified external stakeholders, such as community leagues, recreation groups and environmental groups, were sent a letter introducing the project.

This letter also invited stakeholders to a one-on-one virtual meeting with the project team to capture information regarding the bridge experience, local knowledge about the site, preferred bridge experience, and comments about the environment as per the requirements of the River Valley Bylaw 7188.

Findings from the public survey have been compiled in a What We Heard Report. The key themes about the bridge and site were:

A What We Did response to What We Heard comments from this survey will be provided.