When Edmonton and Strathcona amalgamated in 1912, there was duplication in street names (Queen Street vs. Queen’s Avenue for example), and the street numbering systems which had been put in place didn’t align. Also, the rapid expansion of subdivisions and relaxed attitude towards naming had resulted in instances where a single avenue could change names multiple times. As a result there was much confusion around navigating the newly merged city.

In early 1913 the City Engineer created a report on street renaming and renumbering. The report suggested a combination of numbering and names, and the City Commissioner recommended Council establish a committee to focus on the issue.

City Council began debating how to move forward with street numbering, and by summer of 1913 Mayor William Short suggested our current model, where the city centre would be numbered 101 Avenue and 101 Street, expanding outward accordingly. Shortly after the discussions began, citizens began to protest renaming efforts.

By October that year, the first petition against renumbering was submitted to Council. After a public meeting, Council was asked to stop renumbering efforts until a plebiscite could be held and voters could decide.

After several months, numerous Council meetings, and much legal wrangling, Council decided to allow voters to decide. A series of public meetings were held to help develop the question.

In late February the City Commissioners decided upon a format for the plebiscite. Voters could choose to continue with the street numbering as suggested by Mayor Short in 1913, adopt the quadrant system used on the south side, or adopt a system that used both names and lower numbers radiating from First Street and Jasper Avenue.

As part of the plebiscite, a contest was held. The City requested people submit proposed street numbering or street naming schemes, and the winner would receive $100. 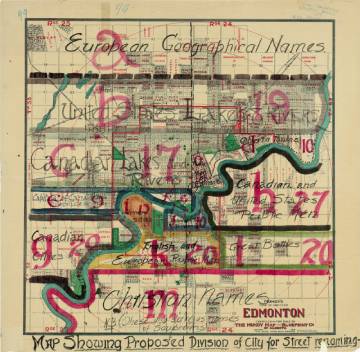 This map is believed to be one of nearly 200 proposals received.

Edmonscona plan, as printed in the Edmonton Journal, March 30, 1914 page 15. This article was printed with it: Street Renaming Scheme Explained for Benefit of Ratepayers of the City

“After careful consideration your Committee believe that the scheme of “EDMONSCONA” (No. 111) to be distinctly the best, meeting as it does the various difficulties of the river and irregular surveys, and have no hesitation in recommending that the $100.00 prize be awarded to it.”
-From Specially Appointed Street Numbering Committee, Report No. 6

A New System is Approved

The plebiscite was held April 6, and the result was front page news the following day. Mayor Short’s original numbering system was approved by voters, despite the Edmonscona plan having won the contest.

By summer, the majority of the renumbering had taken place. Despite several attempts over the next two years to reopen the issue by individuals and organizations, such as the Edmonton Property Owners Association, the matter was finally put to rest. 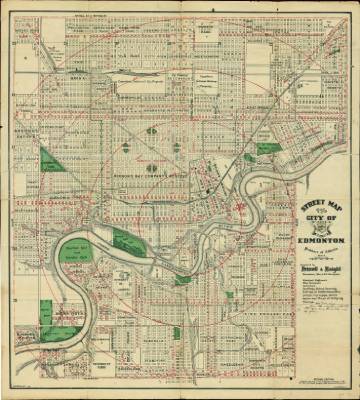 This map from 1924 shows the results of the street numbering initiative, with comparatively few named streets remaining. 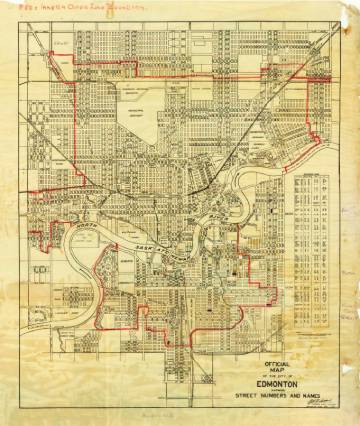 This 1933 map includes an index of former street names and corresponding numbers, which is evidence that although the official names had changed close to twenty years prior, the original names may still have been in use.