After the street renumbering saga, Council began taking a keener interest in naming. While place names were ultimately at Council’s discretion, many people had the opportunity to contribute names. An example of this can be found in the September 19, 1916 Council minutes, where a slate of new names were accepted for newly developed parks in the City.

The Parks & Markets Committee was composed of the Mayor, three Aldermen, and a City Commissioner. Their report, which proposed the names, was based on a 1914 submission by Commissioner Harrison (one of the most senior City employees). This submission took into account requests from citizens (Victoria Park), and from major land-owner the Hudson’s Bay Company (Mount Royal Park, Hardisty Park). Other names were descriptive (Exhibition Park, Riverside Park), and many were in honour of local individuals (Groat Ravine Park), national figures (MacDonald Terrace), and European leaders (King George Terrace). The Mayor and Aldermen put their own stamp on the names as not all of the Commissioner’s proposals were accepted. Tipperary Square, for example, was rejected and replaced with Kitchener Square, after British Field Marshal Horatio Kitchener, while King Albert Square (in honour of the King of Belgium) was turned down in favour of Edith Cavell Square.

Sometimes citizens took their suggestions directly to Council. Ida Turner, for example, suggested that Kitchener Square be renamed Howard-Taylor Square, in honour of a fallen soldier from the University of Alberta who died in the First World War, fighting in Belgium. The suggestion was ultimately turned down.

Street Numbering Over the Decades 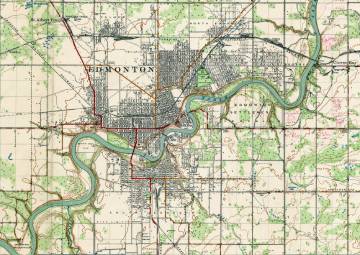 Over the next few decades, there was very little growth in Edmonton compared to the pre-WWI boom. This above map from 1926 shows actual buildings constructed. Compared to the maps from the early 1910s, you can see that planning and numbering of streets far surpassed what actually existed, making Council’s work relatively light.

This report to Council from 1953 shows that assigning numbers to new streets and avenues continued to be standard practice at the time. 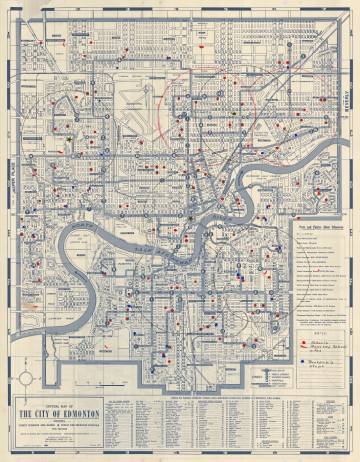 This map from 1957 shows that over 40 years after the street numbering initiative, few new street names were created.