Origins of Naming in Edmonton

Before it was Edmonton

This place had names long before Europeans and other settlers arrived. People have lived in this area for thousands of years. The Cree called the area Beaver Hills (Amiskwaciy). The North Saskatchewan River was called Omaka-ty by the Blackfoot meaning Big River, and French maps from the 1790s called it Rivière Bourbon after the French royal family. We now call it the North Saskatchewan, based on the Cree word kis-is-ska-tche-wan meaning “swift current”. It was first documented as the Saskatchiwine River in 1793 by Alexander Mackenzie, and was an early example of how some names we use today are the result of misinterpretations or misunderstandings of Indigenous words. Other examples of this include Blackmud Creek (first noted in 1882) , which is a translation of the creek’s original Cree name kaskitewâw asiskîy, and Kinokamau Lake (first noted in 1895), which takes its name from the Cree word kinokamâw, meaning “long lake”. 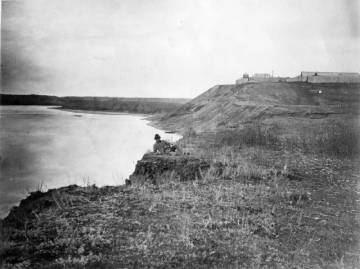 Place names are a reflection of colonialism, and for evidence you need look no further than the name of this city. The name Edmonton was first given to Fort Edmonton, a Hudson’s Bay Company (HBC) fur trading post on the North Saskatchewan River, in 1795. It was named after Edmonton, England, the birthplace of Sir James Winter Lake, who was at the meeting of the governors of the HBC when the fort was established. The fort was moved a number of times until finally, in 1830, it was built on the banks of the river where the south lawn of the Legislature sits today. 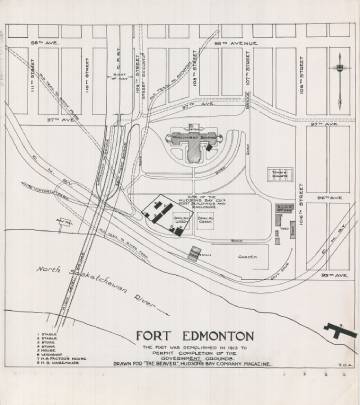 This map, from around 1935, shows the final location of Fort Edmonton.

Other Names for Edmonton

Even after it was “officially” named by the HBC, the fort continued to be called other things by the people who came to trade. The Cree called it amiskwacîwâskahikan (Beaver Hills House); the Nakota Sioux called it ti oda, (Many Houses); and the Niitsitapi called it Amakowsis, or omahkoyis (Big Lodge). It is possible too that the fort was known by other names as well, in languages which have yet to be revitalized.

Other early names relate to colonial resource development here. Whitemud Creek was first used by Dr. James Hector of the Palliser Expedition in 1858, who noted the white-coloured mud on the banks of the creek used to whitewash the HBC buildings. Fort Road was part of a fur trade trail system that stretched to Lower Fort Garry (Winnipeg). It later gained importance as the road that connected Edmonton to Fort Saskatchewan.

Naming is tied to conquest, settlement, colonialism. In order for the Dominion Government to administer the west, and allow it to be settled by newcomers, names needed to be standardized. In response, the Geographic Board of Canada was established in 1897. Although Provinces were allowed input, the ultimate decision was made in Ottawa.