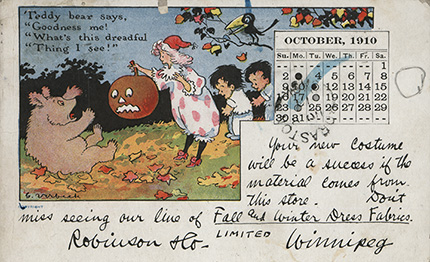 You may be surprised to learn a lot of the objects and characters we consider part of Halloween have been part of the celebration for generations.

The persecution of “witches” began in the 1480s. Tens of thousands of people, mostly women, were imprisoned, tortured and killed based on accusations of witchcraft.

In 1590 dozens of Scots were tried as witches, accused of trying to stop King James VI from reaching queen-to-be Anne of Denmark by causing storms on October 31. This was called the North Berwick Witch Trials. Since that time, witches and their accompanying broomsticks and cauldrons have been associated with Halloween.

The Devil has been considered part of Halloween since the Middle Ages, when the Catholic Church began Christianizing the pagan holiday of Samhain. The Devil’s supposed connection with witches has also made him a long-lasting Halloween icon.

Black cats and witchcraft have been linked since the Middle Ages. Among the many beliefs were that witches could shape-shift into cats and that witches turned their cats into horses to ride on Halloween night.

Halloween was considered the time when the veil between the living and dead was at its thinnest. It was believed the best time to contact the dead was on this day.

Some believe owls and bats are tied to Halloween because they are nocturnal predators. Owls also have an historical association with witches, and bats have been popularly associated with vampires since Bram Stoker’s Dracula was published in 1897.

Halloween is celebrated around harvest time in most of Canada and the United States. Scarecrows, corn, and pitchforks are important farm images, and have been traditional Halloween icons since around 1900.

Pumpkin carving on Halloween evolved from the Celtic tradition of carving turnips to ward off evil spirits. There are reports of pumpkins being carved as early as 1820, but jack-o’-lanterns were not common at Halloween until the late 1800s.

Apples are closely associated with Halloween. While no direct connection is made between Samhain and apples, apples often appear in Celtic mythology. Also, given the timing of the holiday around harvest time, apples were plentiful.

Orange and black were established as Halloween’s colours in the early 1900s. They were likely chosen because they represent pumpkins, fall, and harvest (orange), and death, night, and mystery (black).