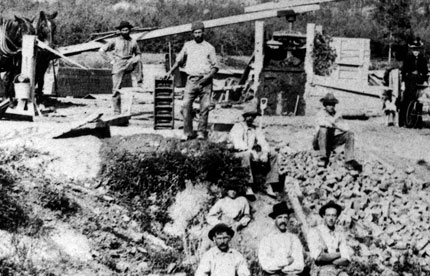 'Dogpatch' was a community in Riverdale east of 92 Street and south of 100 Avenue.

It was known somewhat disparagingly as Dogpatch after the impoverished setting of the Li’l Abner comic strip, which ran in newspapers from 1934 to 1977.

In the 1890s and early 1900s Riverdale was an inexpensive place for new immigrants to live, and D. R. Fraser's lumber mill and J. B. Little Brickyard provided jobs. Many newcomers to the area came from Holland, and the land between the brickyard and the river became known as the Dutch Settlement.

This section of land belonged to brickyard owner James Little and he rented it out to people in an arrangement called a "ground rent". Although it never received water or sewer lines, people built modest homes, though today (and even then) some might be called shacks. While natural gas and electricity were available, life was hard.

After the financial crash of 1913 work was difficult to find, and many Dutch settlers left the area.

Over the years residents moved out or passed away, and the homes were sold to new owners. Though residents had little money, the rents remained low and most owners tended gardens and raised chickens. Water was drawn from a community tap and hauled home, and outhouses were the norm.

Former residents have mixed memories about living in the area. Some recall the hardship of raising a large family in a tar paper shack, and trying to keep bedbugs off the children as they slept. Others reflect fondly on the area, being close to nature and with lots of children with which to play.

The End of an Era

In 1984 about 15 people still called this area home. The City had been concerned for years about the lack of plumbing, and pressured J.B. Little and Sons to evict the residents. In August of 1984 notices were sent around, giving people until March, 1985 to move out.

Once all the residents had left, the City deposited the clay excavated during the construction of Canada Place (9700 Jasper Avenue) on the Dogpatch site, further obscuring it from public memory.

Fire insurance plans like this were created by insurance companies to gauge the risk of fire to property, and are an invaluable resource for local historians. This page, from the 1950s, shows the location of the homes in Dogpatch, labelled "Squatters' Frame Shacks".