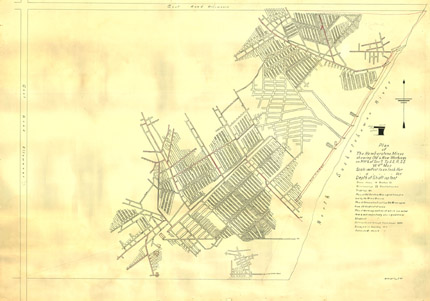 The Humberstone Mine Company was established in 1900. The coal mined came from the Clover Bar seam, which was between five and seven and a half feet thick. Over the thirty-four years the mine was active, more than 980,000 tons of coal was pulled from the ground. 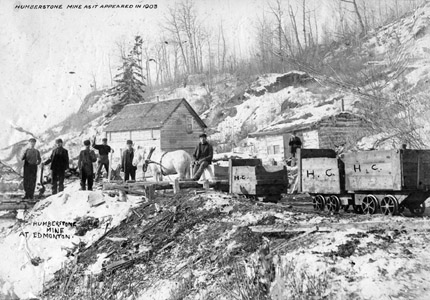 The original mine entrance was a horizontal shaft, called a drift, located on the riverbank just south of the present-day Clover Bar Bridge. In 1900 the mine had a capacity of ten tons of coal daily. Over the next two decades many improvements were made. Around 1910, a new shaft was dug and a spur track was laid to connect the Humberstone Mine to the Grand Trunk Pacific Railroad. This track ended at the shaft and made loading and shipping the coal much easier. The old drift entrance from 1900 was fitted with a fan house to help ventilate the mine. Five smaller fans also operated, keeping the mine dry as well. Electric light was available at the bottom of the main mine shaft, but miners’ lamps were required everywhere else.

Life at the Mine 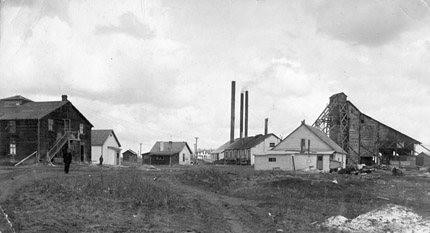 In the late 1910s, the Humberstone Mine had 200 employees in the busy winter season, with a monthly payroll of $25,000. Because the mine was relatively isolated it became a community unto itself. Over 100 men were housed and fed on site, and their camp was reportedly one of the best in the west. 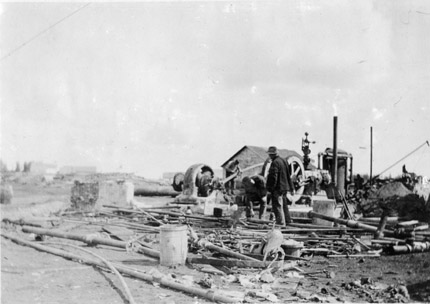 Although no large disasters ever took place, safety remained a concern. There were several reports of fires in the coal seam between 1901 and 1929. In his 1971 work Atlas: Coal-mine Workings of the Edmonton Area, geologist Richard Spence Taylor remarked “It would not be surprising if fire still smouldered in some part of the waste in these workings.” There could also be fires in the buildings, such as the one that destroyed the power house around 1915.

Cave-ins were also a problem. A slope was dug in 1909 to connect with new shaft workings, but by 1910 it had collapsed and was abandoned. Flooding was a problem as well. In 1915 water broke into the shaft mine and flooded it. This was apparently caused by pillar-pulling which resulted in caving to the surface, and which allowed surface runoff into the mine. Similar caving to the surface occurred in 1917.

The company reorganized in 1923 as Humberstone Mines Limited and three thousand shares were sold at $10 each. However, the money did not last long. In 1925 there was a fire at the mine. In light of the damage, as well as the depleted coal reserves, the mine was closed. It reopened in 1928 and operations continued until 1934, however the economic conditions of the depression forced it to close again. The carts and tracks were abandoned and the mine was sealed.