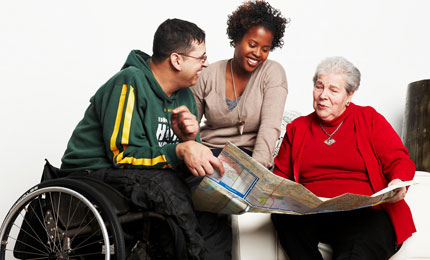 Serving Edmontonians who don’t always have access or opportunity to fully participate in civic life is an important responsibility.  Many of our citizens are houseless and many spend a significant amount of their income on shelter costs.  Others are dealing with the impacts of poverty, violence, and mental illness.  The Social Development branch is tasked with changing and implementing systems to address these issues.  We provide access to services and resources for people trying to overcome social and economic barriers. The branch also convenes and supports communities, neighbourhoods, social agencies, and non-profit organizations that are dedicated to making this a more inclusive, safe, and welcoming city.

The Affordable Housing and Homelessness section is responsible for ensuring there are adequate, safe, and affordable housing options for all Edmontonians. Through collaboration with community partners, the section strives to ensure the safety of people experiencing homelessness and connect them with the available social and housing services. Utilizing data and evidence to inform City research and policy work, the section works to identify solutions to homelessness and housing insecurity and build capacity among non-market housing providers. Key activities of the section include coordinating the City’s response to homelessness, acquiring land, and land use approvals, for affordable housing. The section also makes land and grant funding available to affordable housing providers and supports third-party development activities with communications, engagement, and City approval processes.

The Community Resources Section allocates, monitors and coordinates the distribution of grants and funding to strengthen the not-for-profit and social services sector through operational, project, program, and capital development needs and interests.  This work involves the development of policies, procedures, and the provision of evaluation tools and support to ensure the impact of work in the community and internally is realized. This team strives to assist in the identification of social issues, trends and needs to develop strategies to address them. And they also work collaboratively with internal partners and the community to build capacity.

The Edmonton Family and Community Support Services (FCSS) program is also within this section, working in partnership with the Ministry of Community and Social Services and community partners to ensure preventive social services and programs are meeting identified outcomes.

Together, these teams work with individuals, groups and organizations to make sure that people have access to the resources they need to stay healthy and safe and to fully participate and be included in their community and the city.  The section pays particular attention to people and groups that have been made marginalized or that have additional barriers to participation.  Team members work specifically on poverty reduction and increasing safety for people in their homes, in public spaces & in their neighbourhoods.   When people or groups identify barriers to participation, challenges with accessing resources, or problems with policy, team members work collaboratively with a range of community and government partners to address these issues and to advance policy and system changes.

Edmonton is home to a dynamic, vibrant, and an energetic Indigenous population. It is young, entrepreneurial, educated, culturally active, artistic, and caring. It is the home of the second largest urban Indigenous population in Canada, and lies in the heart of Treaty No. 6 territory. It is the headquarters of the Metis Nation of Alberta, and a gateway to the north for many Inuit who seek services away from home. Edmonton is a hub for visitors before embarking on to the numerous Treaty 8 First Nations and Metis Settlements in Northern Alberta, and welcomes many other Indigenous people who come to Edmonton to work, live and play.

The goal of the Indigenous Relations office is to honour the foundational relationship that Indigenous peoples share with Canada, to help move the City of Edmonton forward in the journey of reconciliation, and to help address the challenges Indigenous peoples disproportionately face in an urban setting.

The “Indigenous community” is not one community, but “many communities” representing many cultures and experiences, but with a shared connection to this land that is sacred. It is a reflection of the diversity and multifaceted population which calls Edmonton their homes.

The vision of the Section is the creation of a “Socially Cohesive” City; The absence of fractures or divisions within society and the ability to manage such divisions; creating a sense of belonging, promotes trust, fights exclusion and marginalization and offers its members the opportunity of upward mobility. The goal of the Section is helping to build a “Socially Inclusive” City. The process of improving the terms of participation in society for people who are disadvantaged on the basis of age, sex/gender, disability, race, ethnicity, origin, religion, or economic or other status, through enhanced opportunities, access to resources, voice and respect for rights.

The Section advances work towards a Socially Inclusive City by supporting the following advisory committees of City Council and working on issues that impact these various equity-deserving populations; Anti-Racism Advisory Committee (BIPOC), Youth Council, Accessibility Advisory Committee, and the Women’s Advocacy Voice of Edmonton. In addition, the section also has a strong focus on new-Canadians, refugees and persons with precarious status through participation in a national initiative called, “Local Immigration Partnerships” and, the lead on the annual State of Immigration and Settlement in Edmonton Report.