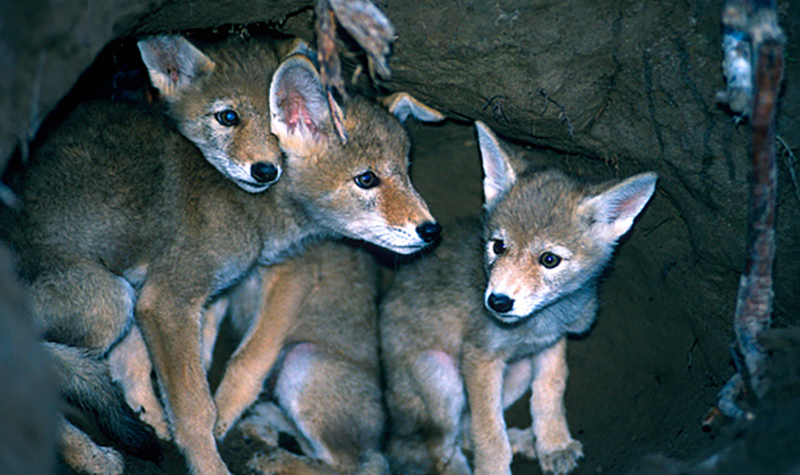 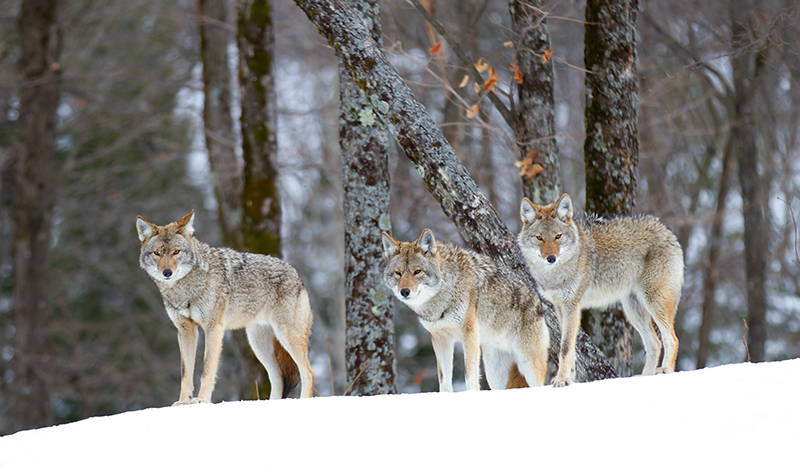 As one of Alberta's native wildlife species, coyotes have a natural and beneficial role as scavengers who can also help manage rodents and small mammal populations within the city. Coyotes are omnivores that eat other animals, insects, vegetation, fruit and seeds, including birdseed and food scraps.

Coyotes are part of the dog family with long legs, oversized pointed ears and large bushy tails with black tips. An average adult coyote weighs 9 to 14 kilograms and is just over a metre long from nose tip to the tip of its tail. Coyotes have light grey or tan coats of variable lengths and slim pointed muzzles.

Why are Coyotes Living in the City?

Coyotes have long existed alongside humans and have adapted to live within population centres because of the opportunities they present to foraging scavengers. As our city grows and expands into rural areas, more coyotes are adapting to food sources in residential areas by eating readily available backyard food sources such as garbage, food scraps, fruit and pet food.

Coyotes do not pose a threat to humans and the extremely rare cases of physical contact are almost always as a direct result of feeding or den defense. Coyotes have a weaker bite than wolves, foxes, most dogs and even humans!

Coyotes naturally hunt rodents and small mammals such as rabbits, hares, squirrels and gophers, in addition to being opportunistic feeders who may consume garbage, fruit or even insects. Coyotes do not look at humans as prey, and are generally afraid of us, although urban coyotes can become desensitized to human activity or presence especially if they are used to getting food near people. Coyotes perceive humans as being providers or resources they can exploit and some people report an increased presence in neighbourhoods during garbage days or when garbage is placed out and easily accessible beforehand.

Coyotes and the Tapeworm Echinococcus multilocularis

A new strain of tapeworm called Echinococcus multilocularis has been detected in urban coyotes in Edmonton.

Between 60-80 % of Edmonton’s coyotes carry or previously carried this parasite - a much higher proportion than most locations in North America.

In humans, this zoonotic parasite can lead to the development of parasitic tumors that can form in the liver, lungs, brain and other organs.

Although human cases of this are rare, several have been identified in Alberta.

How Can Humans Become Infected?
How Can I Protect Myself?

Although the public should not be alarmed, people can still protect themselves by:

Coyote In Your Neighbourhood

Park Rangers Ryan Smar & Kara Marshall deliver a webinar on Urban Coyotes in Edmonton. Learn what to do if you encounter a coyote, how to coyote-proof your yard, what attracts coyotes & how you can help keep coyotes wild & decrease coyote-human conflict.