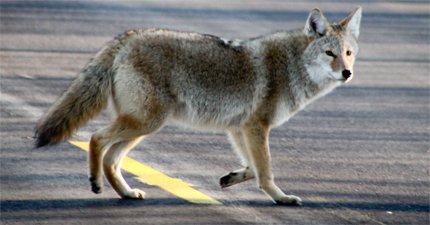 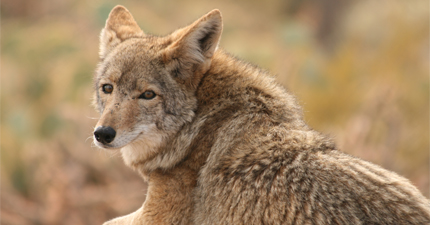 Edmonton’s river valley and ravine system is the largest urban park in North America and serves as a corridor for movement of wildlife regularly through the area. As one of Alberta's native wildlife species, coyotes have a natural and beneficial role as scavengers who can also help manage rodents and small mammal populations within the city itself.

Coyotes are part of the dog family but generally have longer legs, oversized pointed ears and large bushy tails with black tips. An average adult coyote weighs 9 to 14 kilograms and is just over a metre long from nose tip to the tip of its tail. Coyotes have light grey or tan coats of variable lengths and slim pointed muzzles.

Coyote sightings are common within the city but it’s only necessary to report a coyote sighting if the coyote:

When an incident with a coyote is reported, the City will investigate and determine if a problem exists. Depending on the circumstances, an appropriate course of action will be taken. This could include public education, warning signs or coyote management techniques.

To avoid conflict with coyotes, follow these simple steps:

Why Coyotes Are Living In The City

Coyotes have long existed alongside humans and have adapted to live within population centres because of the opportunities they present to foraging scavengers. As our city grows and expands into traditional wild habitat, more coyotes are adapting to food sources in residential areas eating readily available backyard food sources such as garbage, fruit and pet food.

Coyotes can be territorial and could consider your dog a threat. Coyotes may try to draw a dog away and attack it to eliminate the threat. Keeping your dog close on a leash at all times is the best way to ensure its safety.

The City of Edmonton's Animal Licensing and Control Bylaw requires owners to prevent their cats and dogs from roaming free and unsupervised off of their property. By permitting your pets to roam free outside of your property, you provide the opportunity for a potentially serious encounter between your pet and a coyote.

Coyotes naturally hunt rodents and small mammals such as rabbits or hares, in addition to being opportunistic feeders who may consume garbage, fruit or even insects. As such, coyotes do not look at humans as prey, and are generally afraid of us, although urban coyotes can become desensitized to human activity or presence. Coyotes perceive humans as being providers or resources they can exploit and it is common to see increased presence in neighbourhoods during garbage days or when garbage is placed out and easily accessible beforehand.

Coyotes do not pose a threat to humans and the extremely rare cases of physical contact are almost always as a direct result of feeding/desensitization. Coyotes have a weaker bite than wolves, foxes, most dogs and even humans!

What to Do if You Encounter a Coyote

To prevent coyote attacks on humans, modern wildlife management focuses on ‘aversive conditioning’. This practice tries to change an animal’s behaviour by making every human coyote encounter unpleasant for the animal. This method only works if we all respond to coyote encounters aggressively. If a coyote does approach, make it feel unwelcome. They should not feel comfortable around us.

Coyote In Your Neighbourhood

Park Rangers Ryan Smar & Kara Marshall deliver a webinar on Urban Coyotes in Edmonton. Learn what to do if you encounter a coyote, how to coyote-proof your yard, what attracts coyotes & how you can help keep coyotes wild & decrease coyote-human conflict.

Your Guide to Coexisting with Urban Coyotes In Edmonton

Learn about the study being conducted by the University of Alberta.

Information about coyotes from Alberta Environment and Sustainable Resource Development.

To Report a Problem Coyote, call