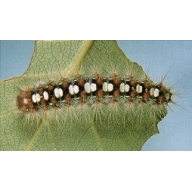 The satin moth (Leucoma salicis) was introduced to North America from Europe in the early 1920s. Satin moth was likely introduced (probably from British Columbia) to Edmonton before 1991 but went unrecognized until 1994, allowing the population to spread.

Mature satin moth caterpillars grow to be 38 mm long. Their backs are black with a central row of white or light yellow markings.

The adult moths have pure white wings with a satin-like lustre. They are heavy-built moths with a wingspan ranging from 35 to 50 mm and can be distinguished from other local white species by narrow alternating black and white bands on the legs.

The caterpillars feed principally on the leaves of poplar and willow trees and less commonly on oak. In new outbreaks, satin moth is often seen to prefer hybrid poplar species such as the Northwest, Griffin, Silver and columnar types which are planted here as landscape ornamentals. Successive heavy attacks over three years will likely result in the dieback of branches, or even whole trees.

A small parasitic wasp (Cotesia melanoscela) attacks and for the most part now suppresses satin moth populations in the Edmonton area. Typically spraying is no longer required.

There are a couple of cultural practices a homeowner can use to help control satin moth on a tree. The greenish egg masses concentrated on the lower areas of the tree can be easily scraped off in July with a dull blade and destroyed before they hatch.

A sticky band can be used to intercept much of the upward movement of young caterpillars that overwinter in bark crevices on the lower trunk area. Such a sticky band trap should be established by the end of April and monitored throughout the month of May to ensure the sticky surfaces do not become saturated with emerging caterpillars.