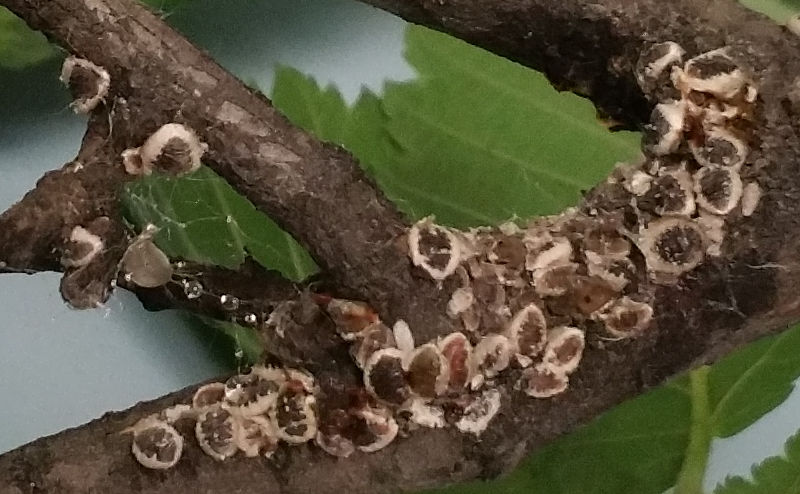 European elm scale can become a nuisance because of sticky honeydew (excrement) production, especially during June and early July.

Branches and nearby surfaces are often blackened by sooty mould growing on the honeydew. Scale feeding can result in yellowing leaves (flagging) and premature leaf drop. Heavy infestation may kill weakened tree and cause branch dieback in healthy trees.  Often a thin canopy can be a symptom of heavy infestation.

To minimize the effects of European elm scale, keep elm trees well watered and healthy. Prune out any dead or dying elm wood between October 1 and March 31 only.

To remove overwintering female scales before they can lay eggs, pressure wash branches after leaf drop in the fall or before bud break in the spring. On smaller trees, you can dry brush the branches instead of pressure washing to remove the scales.

Dormant oil can be applied in the fall following leaf drop or in the spring prior to bud break to kill overwintering nymphs. Apply dormant oil to the bark only if the weather forecast is for temperatures above 0℃ until the treatment is dry, and if the forecast is for no rainfall in the 24 hours following treatment.

Foliar sprays can be used to kill crawlers feeding on the undersides of leaves during summer. Tree care companies can be hired to inject larger trees against scale insects.

There is one generation of European elm scale per year. Female scales overwinter as second instar nymphs, protected along the base of buds and within the cracks of twigs and smaller branches. The oval bodies of the nymphs are covered with a light grey wax.

In late spring, the scales resume development. Mature female scales can be up to 3.5 mm long. Their brownish bodies feature a distinctive white waxy fringe (ovisac) along the margin. Eggs are deposited beneath the female scales and nymphs hatch out over a period of weeks peaking in mid-June to mid-July.

The yellowish crawlers migrate to feed for the summer on lower leaf surfaces, usually attaching along the main leaf veins. The insects crawl back to branches in late summer before leaf drop to attach themselves to twigs and branches.

Any mating that occurs takes place during late April and May, however European elm scale females can reproduce asexually, and the much smaller males are not always produced.

Winged and unwinged males, when present, overwinter in white felty cocoons that resemble grains of rice on the tree.