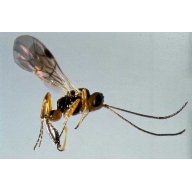 Since the 1970s, three species of sawflies (Fenusa pusilla, Profenusa thomsoni, Heterarthrus nemoratus) introduced from Europe were responsible for the premature browning of birch tree leaves in Edmonton. These species are now largely controlled by naturally occurring parasitoid wasps.

There is a more newly introduced species that seems to be on the rise: Scolioneura betuleti. The City of Edmonton will be monitoring this new leafminer to identify beneficial insects that may be making use of this sawfly as a host, which will support control efforts.

The larvae feed on the inner green tissues of the leaf, causing a discoloured spot. Feeding over several weeks causes the blemish to take on a blister-like appearance.

A single leaf can contain many larvae whose blisters may merge to destroy much of the leaf. Heavy attacks repeated over several years will cause stress, making the tree more susceptible to other problems.

Since 1990, populations of a tiny wasp (Lathrolestes luteolator) which selectively attacks one of the main birch leafmining pests (Profenusa thomsoni) have developed and greatly reduced them in the Edmonton area.

To support the biological control of Profenusa thomsoni, and potentially the newest species, we recommend not chemically treating birch leafminer attack by any of the sawflies.

The following tips will help you maintain a healthy birch tree that will be more resistant to any birch leafminer attack.