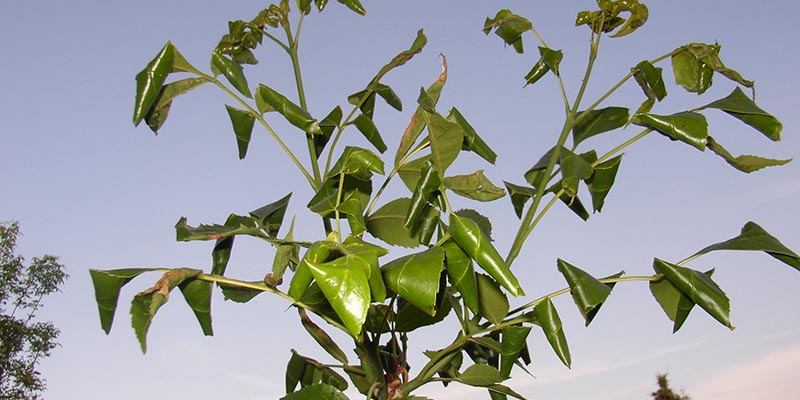 The characteristic leaf-rolling behaviour of this insect does not seriously hurt the tree.

The ash leaf cone roller (Caloptilia fraxinella) starts out as a leafminer caterpillar. It feeds on the tissue between the upper and lower surfaces of the leaflet.  In early to mid June, the caterpillar migrates on a silk line to a different leaflet. Once on a new leaflet, the caterpillar folds the leaflet into the characteristic cone, and spins its cocoon inside. The adult emerges in fall as a small gray moth with a 12 mm wingspan.

The rolling up of leaflets appears to have little effect on the health of the ash trees. The rolled leaflets remain attached to the tree. While a small part of a rolled leaflet will rot, most of it appears to remain undamaged.

The City of Edmonton Pest Management group is attempting to reduce pesticide use and has decided against spraying for this insect on the basis that:

The University of Alberta is currently doing research to develop a "bait and kill" station, which employs the mating pheromone to draw male moths to their death.

The City of Edmonton pest management staff will continue to monitor this insect and impacts on its population by natural enemies like the parasitic wasp.