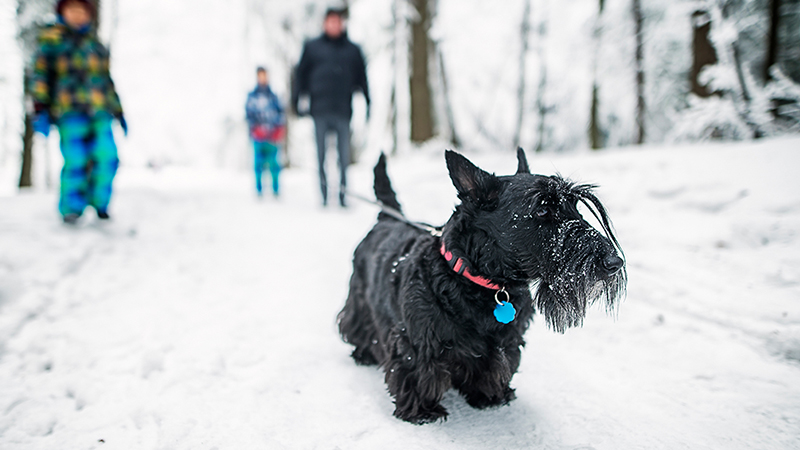 While some pets can’t get enough of the snow, others would rather avoid it. Either way, be aware of your pet’s tolerance for cold weather and adjust accordingly. During extreme cold snaps, consider keeping pets indoors or shorten walks while watching for signs such as:

Other ways to help keep pets safe during the cold include:

Pets who spend a lot of time outside need access to a well-insulated and heated wooden structure that is protected from wind, rain and snow and is equipped with straw. Blankets are not recommended as they are prone to freezing. It’s important to ensure your pet’s water and food are not frozen. Avoid using plastic doghouses and metal dishes.

Pets are vulnerable to frostbite; particularly the ears, paws, nose and tip of the tail. Frostbite is sometimes hard to detect. Frostbitten areas initially turn a reddish colour than gray or bluish. If you suspect your pet has frostbite, take them to their veterinarian for further care.

Salt and chemicals in ice melt can irritate a dog’s paws or be harmful if ingested. Check your pet’s feet after a walk and wipe off any excess snow/ice or any debris.

Many animals and people have perished going onto ice-covered bodies of water. If you see someone or a pet fall through the ice, call 9-1-1. Do not attempt to rescue them yourself.

Do a Walk Around your Car to Check for Animals

Before driving, do a walk around your car to check for animals. Outdoor cats find antifreeze appealing because it's sweet. Cats also like to curl up around a car engine for warmth. By giving a knock on the hood or honking your horn you will hopefully scare them off.

Make a Complaint if you see an Animal in Distress or One that has been Neglected, Abandoned or Abused

Within city limits, the City of Edmonton’s Animal Control Peace Officers and the Edmonton Police Service both deal with animal welfare concerns. The City of Edmonton Animal Control Peace Officers investigate concerns that fall under the Animal Protection Act including neglect and abandonment. Edmonton Police Service investigates concerns that fall under the Criminal Code of Canada including intentional abuse of animals, poisoning concerns or threats to kill an animal. For more information on who to call, visit edmonton.ca/animalprotection.