What is Traffic Noise?

Traffic noise is unwanted sound that comes from vehicles operating on roadways. Most traffic noise in Edmonton is produced by tires moving against pavement. Engine noise can also contribute, especially from large vehicles like buses and transport trucks.

People experience noise differently based on their personal sensitivity to sound. To help address concerns about traffic noise, the City measures the average sound level on a typical weekday (dBA Leq24) to help evaluate the impact of noise on a community.

Although we may hear background noise at a constant volume, sound waves fluctuate rapidly and include frequencies outside our range of hearing. The decibel scale measures the intensity of sound, where 0 decibels represents the human hearing threshold and 130 decibels represents the human pain threshold. Typical daily noise levels are expressed as dBA Leq24, which is a logarithmic average of all noise over a 24 hour period. 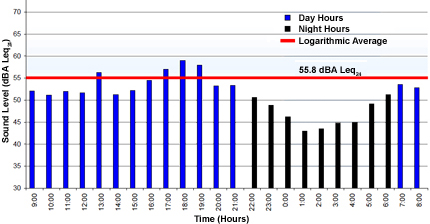 Prolonged exposure to high noise levels over 85 dBA can cause permanent hearing damage. In General, traffic noise does not usually reach these extreme levels. The standard acceptable noise threshold in an outdoor area in Edmonton is 65 dBA Leq24.