The red elm bark weevil (Magdalis armicollis) is an elm feeding beetle native to North America. This insect is not usually observed to a large extent in the Edmonton area, but since its detection in 2003, it appears populations have increased somewhat during recent dry years.

This weevil is attracted to the branches of recently dead or dying elms, and can be a potentially serious pest of elm trees suffering from drought or other stresses. The adults move about freely and feed on the leaves, but most of the damage occurs in the form of twig ends dying off as larvae feed under the bark. These grubs can often occur in immense numbers and sometimes extend their galleries from the recently dead wood into adjacent live tissue, causing further branch dieback. 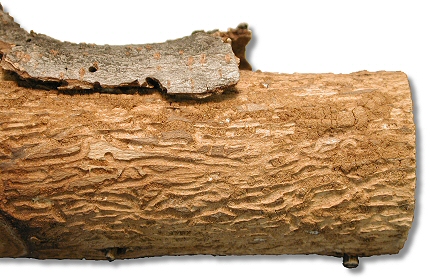 To avoid an infestation of red elm weevils, keep elm trees well watered and healthy. Prune out any dead or dying elm wood (between October 1 and March 31) as it can attract adult weevils. Branches infested with larvae should be removed and destroyed to prevent further build up of the local population and possible spill over to elm trees nearby. Branches suffering from red elm weevil attack can be detected by the small exit holes that are left behind by new adult beetles emerging from beneath the bark.

There is one generation of weevils per year. The insects overwinter as larvae in galleries under the bark. The larvae pupate within the tree in the spring and the adult beetles emerge about three weeks later. The adults escape the galleries by chewing small round holes to the surface and feed to some extent on the foliage.

The weevils mate and lay their eggs during May and June. Eggs are deposited in punctures in the bark, usually in clusters at the bases of twigs or around knots. The larvae feed on the inner bark and sapwood, creating sinuous tunnels that usually radiate away from the egg laying site and follow the grain of wood. The larvae eventually pupate in cells at the end of the tunnels.

The larvae are about 6 mm long or less, have a small brown head, and a plump, white, legless body. The adult weevils range in size from 3 to 6 mm long and have a slightly curved snout about as long as the thorax. The yellowish or pale reddish brown wing covers contrast with the darker thorax and the head. The males are considerably smaller than the females and are decidedly darker on the head, thorax and beneath the body.

Red elm bark weevil males and females differ from each other to such an extent that they were originally described as two separate species.