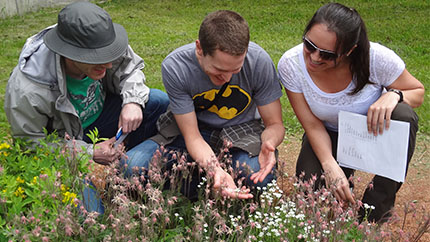 In 2014, Dr. M Anne Naeth of the University of Alberta, Department of Renewable Resources and the City of Edmonton partnered in a joint research project on naturalized areas. The research was focused on the effects of naturalization on living and non-living habitat.

The City of Edmonton is supportive of research and this project is the first of its kind in Edmonton.

We are pleased to share the results of the research: Urban Naturalization: An Approach Towards Sustainable Cities and the Master's Thesis by Jaime Aguilar Rojas

Where are the Research Sites Located?

Each research site has a total area of 300m² divided into 16 plots of 10 x 10 m areas with 3 replicates of each treatment. Six sites had the same native species planted including white spruce, aspen, rose, snowberry and buffalo berry, amongst several other species which are native to Alberta.

At the Terwillegar Community Recreation Centre, the exception is the unique plant material used. This site was planted with over 25 species of flowering wildflowers; for a total of almost 2000 units of native forbs and wildflowers. Some of the species include wild strawberry, white prairie aster, meadow blazing star, and wild mint, amongst others.