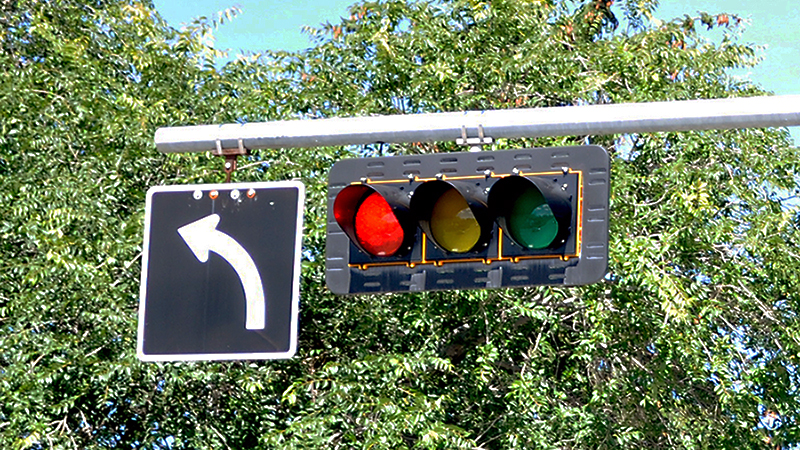 Report streetlights that require maintenance such as light outages.

Who can we contact regarding a problem with a traffic signal?

Contact 311 to report a malfunctioning traffic signal or to inquire about traffic signal timing. Please provide specific details including the exact location of the signal, time of day and direction of travel.

What should drivers do when approaching a malfunctioning traffic signal?

How do I request the installation of a traffic signal on my street?

Residents are encouraged to monitor the time spent waiting to access the main street. If the delay is longer than 60 seconds, they can contact the City with a request for a traffic signal assessment by calling 311.

How does the City decide if a new traffic signal should be installed?

If the City does not have recent data on the location of concern, a delay survey and site check will be scheduled and conducted.  Once the assessment has been completed, a response to the inquiry is prepared and provided.  Any required follow-up action is noted and the scheduled.

What are the criteria for deciding whether a signal is installed or not?

The City evaluates and considers:

Some criteria are rated more highly over others. For example, safety and shortcutting concerns are considered most important, followed by average delay times and vehicle volumes. The evaluation process provides a means of determining whether a traffic signal is appropriate at a given location, and ensures that available resources are allocated to critical locations in a fair manner.

Are traffic signals in Edmonton coordinated?

Yes, most traffic signals in the City are coordinated in order to minimize stops and delays. Ideal or "perfect" signal coordination is often difficult to attain due to varying speeds, congestion, the distance between signals and varying amounts of green time at each intersection. "Perfect" coordination for one direction of travel results in frequent stops and delays for the other direction.

When traffic volumes are relatively balanced, the traffic signals are timed so that the "reds" and "greens" are balanced in both directions. When the traffic flow is heavier in one direction, the signals are co-ordinated to favour the highest volume of vehicles. For example, a vehicle on 97th Street, travelling towards downtown during the morning rush period should arrive at more green lights than vehicles leaving the downtown via 97th Street during the same time period.

Signals along the South LRT (Light Rail Train) corridor are not coordinated. North and south coordination is provided by LRT pre-emptions of the signal.

Do the traffic lights operate the same way all day?

Traffic signals in Edmonton are divided into groups called networks. There are currently more than forty networks in the City. Examples of some of the networks are "Downtown", "Mill Woods", "University", and "Castle Downs". All of the traffic signals within a network typically operate the same schedule of "timing plans" throughout the day. For example, within the Mill Woods network, there are traffic signal timing plans for the "AM Peak", "PM Peak", "Off Peak" and "Night".

As each intersection can have several different timing plans, you may notice that the signal timings are different in the morning than in the afternoon. This explains why a left-turn phase might operate at a particular signal in the morning but not during the evening.

Why are there long delays for left turns and side street traffic along the South LRT corridor?

The LRT has been given priority over vehicular traffic along this corridor to ensure efficient operation and promote LRT use. Delays experienced along the SLRT corridor are a result of random arrival times of LRT trains. The LRT pre-empts the signal before it arrives at an intersection ending phases that cross the tracks and giving green to north and south traffic. Any intersection along the corridor can be pre-empted consecutively by 2 or 3 trains (in alternating directions) resulting in considerable delays for minor movements during peak LRT periods.

Why do left-turn phases only operate at certain times of the day?

Although left-turn phases benefit the turning vehicles, they increase delays for other vehicles and pedestrians using the intersection. Introducing additional phases to a signal sequence results in longer cycle lengths and reduced time available for other movements that are often heavier. Left turn phases are therefore only operated during time periods when left turn demand and delay is high, and there is sufficient intersection capacity to accommodate the additional phase.

The City has an active program of identifying, monitoring, and prioritizing left-turn phase installations at locations that meet City guidelines. This ensures that available resources are allocated to the most critical locations.

What is signal pre-emption?

Signal pre-emption is a temporary interruption of normal signal operation in order to accommodate emergency vehicles, or to clear traffic from at grade railway crossings. Pre-emption along LRT corridors and at signals near other at grade railway crossings is triggered when a train passes over detectors upstream of the signal. Once a train has been detected the signal will clear directions that can have queued vehicles on the tracks then give a green light to movements that do not intersect the tracks until the train has passed.

Traffic and transit is monitored and evaluated for trends to help manage Edmonton's transportation network.