The rezoning to Direct Control Development Provision (DC1) and the accompanying Amendment to the Mill Woods Station Area Redevelopment Plan, which will allow for redevelopment of the Mill Woods Town Centre shopping mall site, were approved at a City Council Public Hearing on July 10, 2017.

The application and Planning and Environment Services reports from the July 10 Public Hearing are available at City Council and Public Hearing Agendas, Minutes, and Videos. The meeting minutes will be available soon.

A second Open House was held the evening of March 16, 2017. Over 400 people were counted in attendance through the evening. There was no formal program, but information and plans were available for viewing.

City staff answered questions regarding the proposed development, the Valley Line LRT, parking management, and the relocation of the Mill Woods Transit Centre.

View all the Information boards.

The City continues to work with the applicant to revise and review the application, taking into consideration the feedback from the public and reviewing agencies.

The purpose of the DC1 Zone (Direct Development Control Provision) is to provide for detailed, sensitive control of the use, development, siting and design of buildings as they relate to the Mill Woods Station Area Redevelopment Plan, which was approved in 2013. 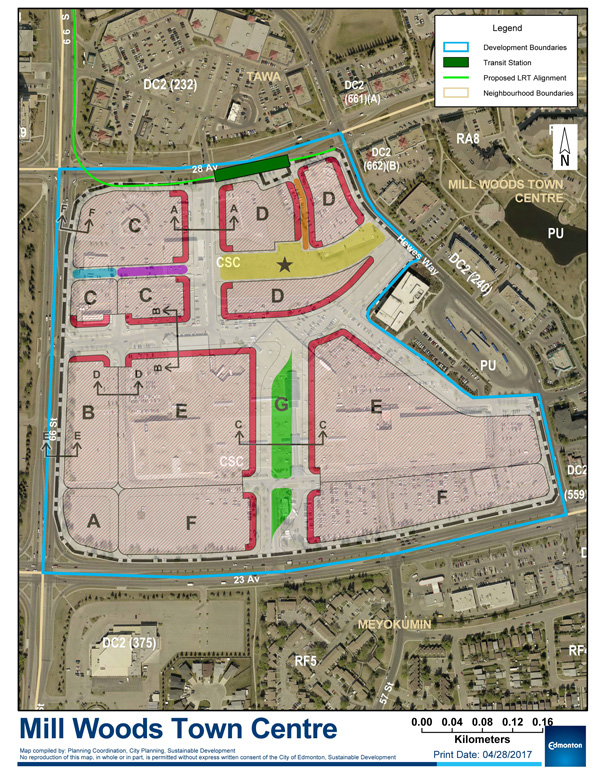 Image not to scale

The application, which includes the proposed DC1 Zone, Mill Woods Station Area Redevelopment Plan Amendment, and a revised Traffic Impact Assessment, is under review by the City and other agencies. A Municipal Servicing Report, and an Environmental Site Assessment (ESA), have been accepted and approved.

Once items have been resolved to the satisfaction of Planning and Environment Services, a recommendation and background report will be prepared to advise City Council.

The rezoning would then be scheduled for a Public Hearing of City Council. Property owners in the vicinity of the site will receive mailed notice of the date, and the hearing will be advertised in the newspaper.

The City has received an application for rezoning and an amendment to an Area Redevelopment Plan (ARP) for the Mill Woods Town Centre shopping mall site.

The proposed rezoning is from CSC (Shopping Centre zone) to DC1 (Direct Development Control Provision zone). The amendment to the Mill Woods Station ARP would support this rezoning.

This proposal would allow the site to change over time from a low-density shopping mall and commercial area, to a higher-density mixed-use centre.

The highest density of uses would be located toward the northeast corner of the site, near the future Mill Woods LRT station and transit terminal.

Automotive-oriented commercial services and low-density, large-format retail would be permitted only along 23 Avenue NW.

The purpose of the DC1 Zone (Direct Development Control Provision) is to provide for detailed, sensitive control of the use, development, siting and design of buildings as they relate to the Mill Woods Station Area Redevelopment Plan, which was approved in 2013.

Key features of the proposal:

Process to change land use zones.