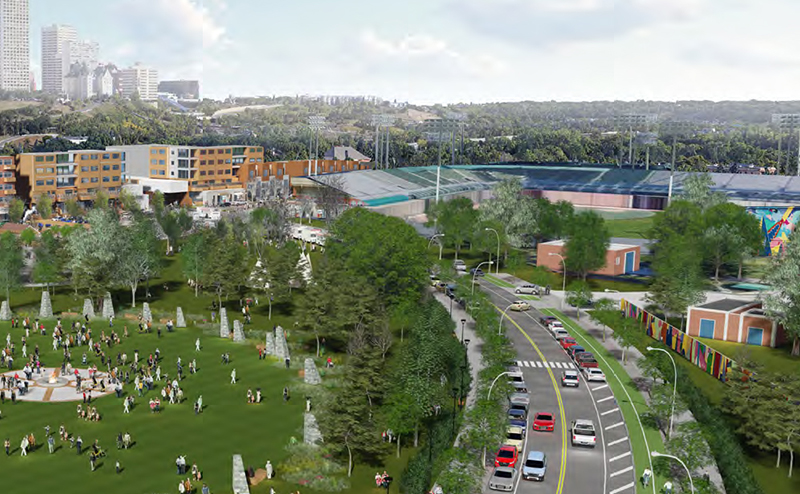 River Crossing is where the city meets the North Saskatchewan River at the heart of Edmonton. On both banks of the river connected by the impressive Walterdale Bridge, and on the water -- this is River Crossing.

History of the Area

Discover the history of the River Crossing - from early times to today.

The North Saskatchewan River was formed as glaciers receded after the last ice age. The river cut a deep, wide valley which began to be used by animals and soon attracted Indigenous peoples. The valley was a sustaining force, giving people water, food, shelter, and medicine. Archaeologists have found evidence of camps along the valley dating back to 10,000 years ago.

Later the river was an important travel route for European fur traders pushing westward. Their first forts were built in the region in 1795. In 1802, they moved upstream to the place we now call Edmonton. River crossings in this era took on new economic importance and brought different cultures together. In the winter, crossings were on the ice. In other seasons they involved boats or swimming (or in low water, riding) horses across.

In 1882, John Walter established a cable ferry that connected the river flats we now call Walterdale and Rossdale. Walter’s ferry tied the two sides of the river closer together as Edmonton grew from outpost to city. The Walterdale Bridge, built in 2017 to replace an earlier structure, is the latest river crossing in this historic location.

Rossdale and Walterdale became some of Edmonton’s first neighbourhoods and had an eclectic mix of homes, schools, churches, industries, utilities and sports facilities. After a major flood in 1915, the neighbourhoods’ fortunes waned. Investment diminished.

After World War II, municipal policy was to acquire land on the river flats for open space, recreation facilities, and freeways. Homes and businesses were demolished as the City purchased them. The last house in Walterdale, the smaller of the two neighbourhoods, was demolished in the winter of 1966/67 to make way for the Kinsmen Fieldhouse (the first phase of the Kinsmen Sports Centre).

In the 1970s, new residents moved into Rossdale and other surviving valley communities, drawn by proximity to Downtown and natural beauty. They opposed policies that would extinguish their neighbourhoods.

In 1975, Riverdale won the right to be preserved and in 1983, after Laurence Decore was elected mayor, Rossdale, Cloverdale, and Lavigne were protected.

City Council approved a plan for Rossdale’s redevelopment in 1986. The plan called for new houses in South Rossdale, and these were built beginning in the late 1980s. The only direction the plan provided about West Rossdale, however, was that a special study should be done in the future. The planners hadn’t been able to win support for the higher density, mixed-use development that they had proposed during the planning process.

Learn about the reports that have influenced the built form of River Crossing.

New interest in West Rossdale began in the late 1990s when EPCOR proposed to expand the Rossdale Power Plant. Nearby residents opposed the project. Heritage advocates sought to preserve the historic Low Pressure Plant that would have been demolished in the expansion. Indigenous activists protested disruption of a long-neglected fur-trading era cemetery and an important cultural site for Indigenous communities and settlers.

In 2001, the Government of Alberta designated the power plant as a Provincial Historic Resource. This ended the expansion bid and eventually led to EPCOR decommissioning the power plant between 2010 and 2012. New attention to the area prompted the City to prepare the Rossdale Historical Land Use Study as well as an oral histories report in 2004. With design input from Indigenous communities, a new cemetery monument was dedicated in 2007.

In 2007 the City also began work on the special study for West Rossdale called for in the Rossdale Area Redevelopment Plan. With significant involvement from residents and other stakeholders, the West Rossdale Urban Design Plan was completed in 2011. The plan called for significant roadway changes and investment in open space in support of a higher-density urban village and mixed-use development.

Following the plan’s approval, however, questions arose about its implementation. A private development proposal challenged the plan. This combined with plans for a new Walterdale Bridge, sale of City land in the area to the Government of Alberta, and interest in the now-decommissioned power plant caused the City to recognize that a more comprehensive planning initiative was necessary.

In 2015, City Council adopted a new River Crossing Vision for the area and directed Administration to prepare a Heritage Interpretive Plan to determine how to bring the area’s history and cultural significance to life, and a Business Plan to guide change on the ground and balance public investment with placemaking.

The River Crossing Business Plan is a key step toward advancing the River Crossing vision. It lays out a framework for how the area can redevelop over the next twenty years.
The plan includes an updated redevelopment concept for the area, a business case suggesting methods for revenue and cost management, as well as a phased implementation plan.

The Business Plan was prepared through extensive consultation with the public, development and community stakeholders, and Indigenous communities.

The River Crossing Heritage Interpretive Plan represents a new way for the City to consider heritage in the area. The overarching aim of this plan is to integrate heritage interpretation into landscape, the built environment (for example, architecture, art, urban design), and programming (such as, activities, animation) in ways that are authentic, appropriate, and compelling for people who will use the space. The plan was developed by building on previous work around heritage, existing research, site analysis, and interpretive planning principles. It also involved considerable engagement with the public, Indigenous communities and related organizations, and stakeholders.

Stay informed about project updates and news on the River Crossing project.

The River Crossing area is a place that is historically and culturally significant for many people, including Indigenous communities, Edmontonians and Albertans.

The River Crossing vision is to transform West Rossdale into a vibrant community and special place for all Edmontonians.

Learn about ongoing projects to implement the River Crossing vision.