Transit Oriented Development (TOD) is an exciting approach to building a city. It concentrates housing, shopping and employment along a network of walkable and bikeable streets within a five minute walk of transit stations – or 400 metres in any direction. TOD will support the City’s vision of a vibrant, sustainable city with attractive, liveable and more compact communities.

To encourage and guide TOD in neighbourhoods near transit stations over the next 30 years, the City has developed TOD Guidelines in consultation with community and business organizations, transit users, City departments and others. The guidelines set out the City’s expectations for transit-oriented development near current or future transit stations.

The TOD Policy and the TOD Guidelines were approved by City Council on Wednesday, February 15, 2012.

The TOD Guidelines will help:

The approved TOD Guidelines include some additional information and changes from earlier versions of the document. For example, there is new information to clarify:

There have also been some specific changes in response to feedback received, including: 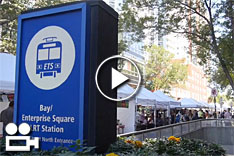 Brief descriptions of the seven types of station neighbourhoods near LRT stations and transit centres.