Her late Majesty Queen Elizabeth II passed away on the afternoon of Thursday, September 8, 2022.

A 10-day period of mourning began at the moment of Queen Elizabeth’s passing, and the Province of Alberta provided information on memorial services and other arrangements across the province.

The City of Edmonton hosted a book of condolence in City Hall’s City Room with a photo display of the Queen’s visits to Edmonton. The City extends thanks to all who attended and paid their respects.

“It is sad news to hear of the passing of Canada’s head of state, Her Majesty Queen Elizabeth II. I invite Edmontonians to pay their respects over the coming days to the Queen, Britain’s longest serving monarch.”  - Mayor Amarjeet Sohi

Queen Elizabeth II became the longest-reigning British Monarch on September 9, 2015, when she surpassed the reign of her great-great-grandmother Queen Victoria. On February 6, 2022, she became the first British Monarch to celebrate a Platinum Jubilee, commemorating 70 years on the throne.

The clean succession from one Monarch to another is established in Canadian Law. On Saturday, September 10, 2022, the United Kingdom’s Accession Council formally proclaimed the new Monarch and Canada’s new Head of State, King Charles III.

The City of Edmonton invites Edmontonians to take part in federal, provincial, and local ceremonies of remembrance for Her late Majesty Queen Elizabeth II.

A book of condolence was made available in City Hall’s City Room at Edmonton City Hall for Edmontonians and visitors to sign between September 9 and September 16, 2022. Thank you to all who attended.

Information about the Government of Alberta’s memorial events was available at alberta.ca/QueenElizabethMemorial.

Learn more about the Government of Canada’s memorial events at canada.ca/en/canadian-heritage/commemoration-her-majesty-the-queen. 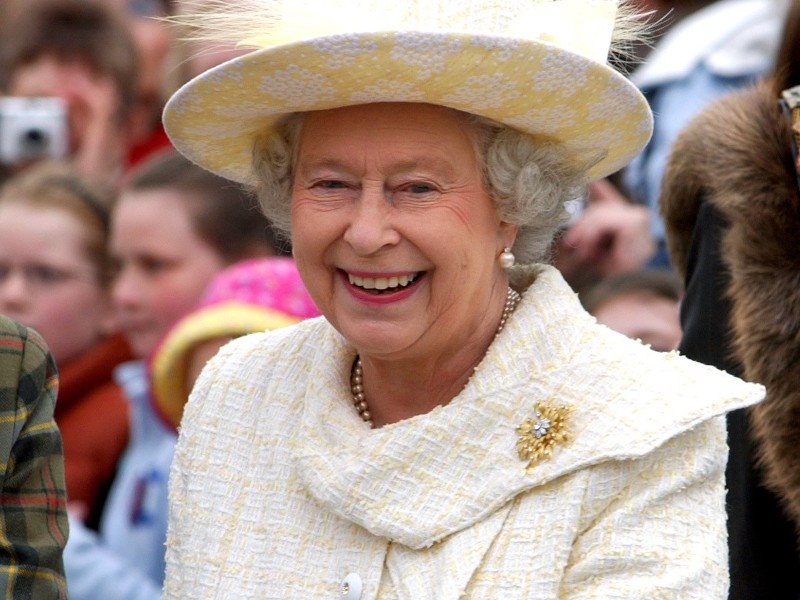 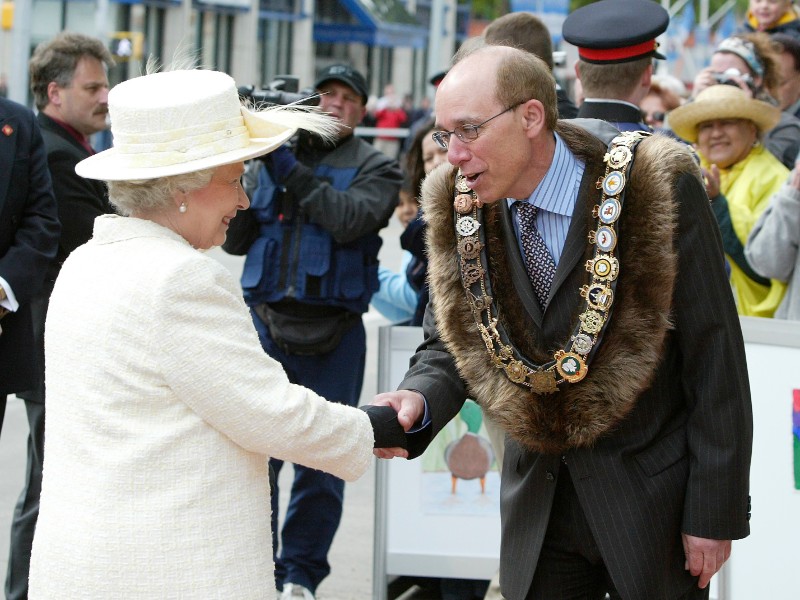 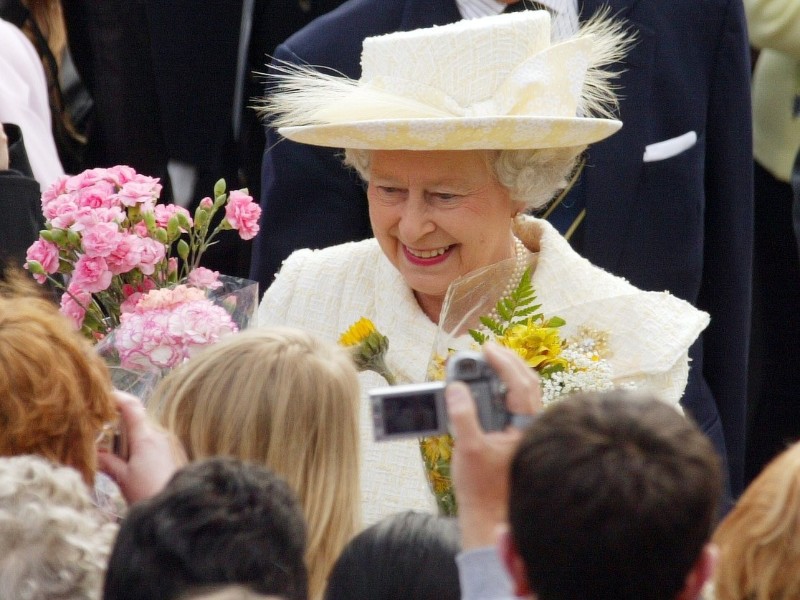 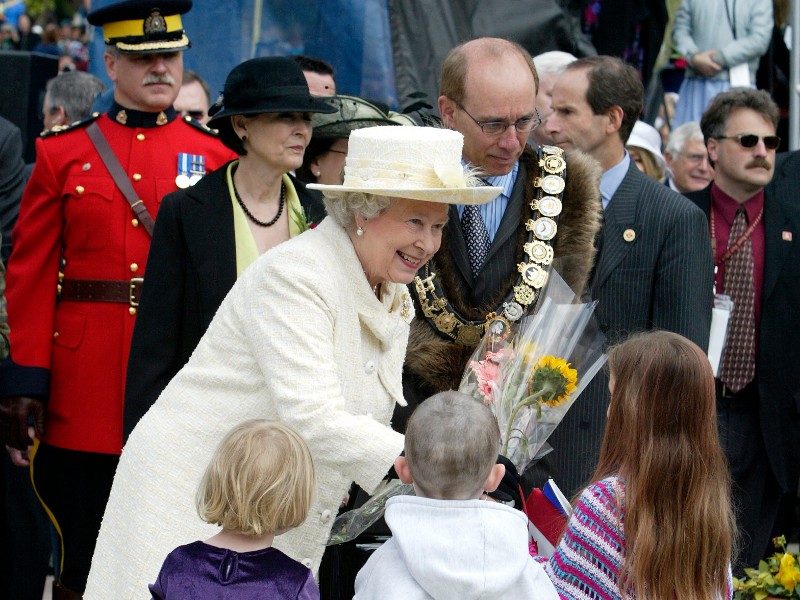 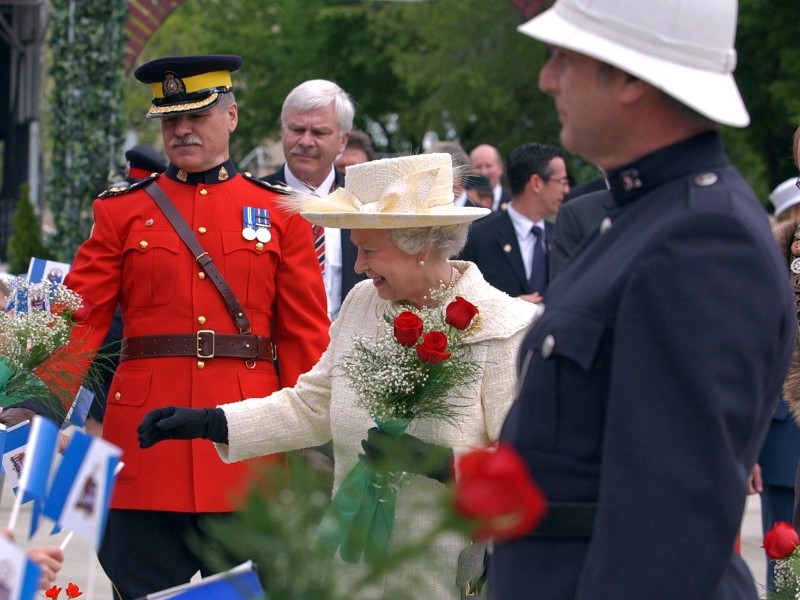 Princess Elizabeth first visited Edmonton alongside her husband, Prince Philip, during their first royal visit to Canada in the fall of 1951. The royal couple completed the 33-day tour across Canada on behalf of Princess Elizabeth’s father, King George VI, as his battle with lung cancer and other ailments worsened back home.

The royal visit’s itinerary was extremely busy and Princess Elizabeth only had 10 hours in Edmonton during her first tour of Canada. In this short window of time, she completed a 32-kilometer procession around the city with an appearance across Princess Elizabeth Avenue — recently renamed by Mayor Sidney Parsons. The adjacent street, Kingsway, was named in commemoration of King George VI’s visit to Edmonton in 1939.

The royal procession included a meeting with Premier Ernest Manning at the Alberta Legislature, a visit to veterans at the University of Alberta Hospital’s Colonel Mewburn Pavillion, tea at the Imperial Refinery, dinner at the Hotel Macdonald, and watching an Edmonton Eskimos victory over the Winnipeg Blue Bombers at Clarke Stadium.

Princess Elizabeth departed the city via train after the football match, and just over three months later, she was crowned Queen with the passing of her father.

Her Royal Highness Queen Elizabeth II returned to Edmonton in the summer of 1959 in part of an expansive, 45-day royal tour across Canada and all provinces and territories. This time around, Edmonton would only host the Queen for a total of four-and-a-half hours before she was off to the next destination.

During this short visit, Queen Elizabeth II was greeted by Lieutenant Governor John Bowlen, Premier Ernest Manning, and Mayor William Hawrelak at the Canadian National Railway station (now the site of downtown Edmonton’s CN Tower) in front of approximately 200,000 spectators. After an official welcome ceremony at City Hall, the Queen planted an elm tree in Coronation Park in commemoration of her ascension to the throne. Coronation Park would become home to Canada’s first public planetarium, Queen Elizabeth II Planetarium, the following year.

An outdoor luncheon at the Alberta Legislature with 2,000 in attendance concluded Queen Elizabeth II’s first official visit to Edmonton as Canada’s head of state.

In the summer of 1978, Edmonton hosted the XI Commonwealth Games in its newly built Commonwealth Stadium. This edition of the sporting event would see nearly 1,500 athletes from 46 nations competing in 128 events, and for the first time since 1934, an opening ceremony headlined by the British Monarch.

Her Royal Highness Queen Elizabeth II arrived in Edmonton via train from Fort Saskatchewan in the late afternoon of August 2 and attended a banquet hosted by Premier Peter Lougheed. During the banquet, the Queen delivered a televised address to all Canadians highlighting the value and strength of a unified Canada.

The next day, following visits to the Alberta Legislature, Edmonton Cenotaph, Edmonton Art Gallery, and Churchill Square, the Queen would arrive at Commonwealth Stadium to formally open the XI Commonwealth Games. The monarch received her speech within the Queen’s Baton from pentathlete Diane Jones Konihowski as over 42,000 spectators viewed from the stands and an estimated 500 million tuned in from across the globe.

After concluding the opening ceremony, the Queen attended an evening reception hosted by the Commonwealth Games Association of Canada. The following day, she visited the Competitors’ Village in place for the Commonwealth Games and attended sporting events at the Coronation Greens, the University of Alberta’s Clare Drake Arena, the Kinsmen Aquatic Centre, and the Northern Alberta Jubilee Auditorium.

The Queen’s final visit to Edmonton took place in May 2005 to celebrate the 100th anniversary of Alberta entering into Confederation. Much like her stay in 1978, the Queen would appear in Edmonton over multiple days to participate in a range of activities throughout the city. Edmontonians fondly remember the Queen’s final visit as her most intimate and accessible appearance in the city.

On May 23, Her Royal Highness Queen Elizabeth II and Prince Philip arrived on the tarmac of Edmonton’s City Centre Airport — the date conveniently falling on Victoria Day, a federal holiday recognizing the Queen’s great-great grandmother and Canada’s first head of state, Queen Victoria.

The royal couple immediately made their way to Commonwealth Stadium and to a crowd of 25,000 rain-soaked Edmontonians upon arrival. Although 50,000 free tickets to the event were claimed, only half of the ticket holders would attend due to heavy rain. After a formal welcome to the province from Premier Ralph Klein, the royal couple departed Commonwealth Stadium and made their way to Hotel Macdonald and to another crowd of drenched spectators hoping to catch a glimpse of the Queen.

The following morning, Prince Philip travelled to Fort McMurray for a tour of the oil sands, a first for a member of the royal family, while Queen Elizabeth II remained in Edmonton for several royal appearances. The first visit would be to the Provincial Museum of Alberta, which was formally renamed to the Royal Alberta Museum in honour of the occasion. The day prior, Highway 2, which links Edmonton and Calgary, was renamed the Queen Elizabeth II (QEII) Highway in commemoration of the Queen’s visit for Alberta’s centennial.

Queen Elizabeth II then made her way to the Alberta Legislature to address the Legislative Assembly — a first in Alberta’s history. After the conclusion of the speech, the Queen exited the Legislature and completed a royal walkabout at the south entrance to meet well-wishing Edmontonians and Albertans.

On the Queen’s final day in Edmonton, she and Prince Philip attended a celebration at City Hall’s Churchill Square hosted by Mayor Stephen Mandel. The royal couple would then complete a rare, twenty-minute-long walkabout through the crowd to meet many of the bystanding Edmontonians. A public interaction of this length was considered a very special occurrence in comparison to the Queen’s usual, and typically brief, public appearances.

The royal couple would then depart Edmonton for an afternoon and evening in Calgary before returning home to the United Kingdom. This would mark the last visit to Alberta for both Queen Elizabeth II and Prince Philip.

Located between Kingsway and 118 Avenue, this stretch of road was named in commemoration of Princess Elizabeth’s royal visit to Edmonton in October 1951, less than four months before she would be crowned Queen. The adjacent street, Kingsway, was named in honour of King George VI, Queen Elizabeth II’s father, during his royal visit to Edmonton in 1939.

Originally designed to be the centre of focus in Coronation Park, the planetarium was the first of its kind in Canada and named in commemoration of Queen Elizabeth II’s first official visit to Edmonton as monarch in July 1959. The planetarium was restored and reopened in 2021 and now operates as the Telus World of Science.

Located in the parking area of Coronation Park, on the corner of 111 Avenue and 114 Street, Edmontonians will find an elm tree known as the “Coronation Tree” standing tall. Queen Elizabeth II planted the elm with a golden-handled spade during her visit to Coronation Park in July 1959. The elm commemorates the Queen’s ascension to the throne.

Formerly known as the Provincial Museum of Alberta, the Royal Alberta Museum was rechristened during a royal visit by Queen Elizabeth II in part of Alberta’s centennial celebration in 2005.

Connecting Edmonton and Calgary, Highway 2 was formally renamed the Queen Elizabeth II (QEII) Highway in commemoration of the Queen’s royal visit to Edmonton during Alberta’s centennial celebration in 2005.