At its September 10, 2013 meeting, Community Services Committee passed the For the Love of Winter: WinterCity Strategy Implementation Plan. 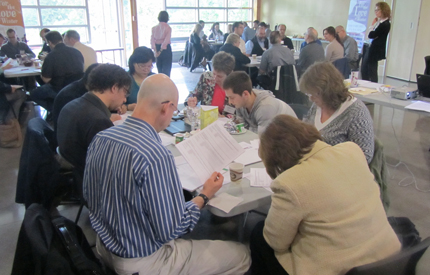 At an in-depth, facilitated workshop, members of the Advisory Council and working groups, as well as invited community members, met to prioritize the actions in the Implementation Plan. Actions were divided into the categories of foundational, quick-win and determined effort, and timeline targets were set for short-term (1-2 years), medium-term (3-5 years) and long-term (6-10 years). Descriptions of all the actions and their categories can be found in the Implementation Plan.

The WinterCity Advisory Council  was formed to oversee the development of the WinterCity Strategy Implementation Plan. Four working groups were also formed to work on each of the four pillars: Winter Life, Winter Design, Winter Economy and Winter Story.

The Advisory Council and the working groups were made up of community members, City of Edmonton employees and two City councillors.

The For the Love of Winter: Strategy for Transforming Edmonton into a World-Leading Winter City was enthusiastically endorsed by City Council.

The WinterCity Think Tank’s recommendations were reviewed at the May 14, 2012, Goal Validation Workshop, and then by all Branches within the City’s Departments. We collected all this feedback and fine tuned the proposed goals and actions. At the July 6, 2012, Think Tank meeting, the Think Tank approved the goals and actions that form the backbone of the strategy. At the August 30, 2012, meeting they then approved the rest of the text of the strategy document.

From March through May 2012, the project team consulted with almost 200 individuals. We held leadership sessions and dialogue workshops with key stakeholders from these diverse groups.

In addition to the above, presentations were made to twelve groups including a City Hall School class, Wichitowin, M.A.D.E., the Community Services Advisory Board, and NextGen.

In addition to all the people reached through the above efforts, others participated through IdeaScale (our online crowdsourcing tool), the postcard campaign, and the Global TV Winter Life Contest. Through these methods, we collected almost 500 ideas – rich, creative, diverse… All together giving a very good idea of where this strategy needs to take us.

Recurring themes heard at consultations regarding Edmonton’s unique assets include: 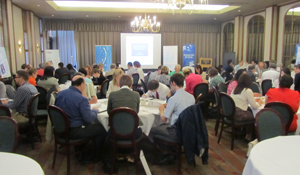 On May 14th, 83 people turned out to the Petroleum Club for a four-hour workshop to review and validate work done so far by the WinterCity Strategy Think Tank. The Think Tank had developed 14 recommendations, each followed by a number of actions. Participants discussed each recommendation and all the actions. They were asked if they agreed or disagreed with the material, why and what suggestions they had for improvement. Their work is now being integrated into draft 2 of the WinterCity recommendations, which will go back to the Think Tank chairs for further refinement.

How do you develop the world’s largest outdoor winter party and repeatedly attract crowds throughout the winter months? On February 14, Edmontonians gathered in City Hall to hear Pierre Labrie, former head of Quebec City Tourism, answer these questions. He spoke of Quebec City’s journey to becoming a winter city success story - a destination for residents, Quebecers and international tourists.

M. Labrie began at the start – with the birth of the Bonhomme Carnival in the 1950’s, an event designed to offset the impact of no tourism in wintertime. Today, it’s the largest winter event in the world. But when Quebec City lost its bid for the 2002 Winter Olympics, city leaders realized more needed to be done to attract the world’s attention. Now there are direct international flights to the city throughout the winter, hotel occupancy rates are up and Quebec City hosts many international winter events including: 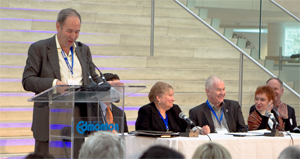 On January 20, 2012, 170 Edmontonians gathered at City Hall for a half-day symposium to learn about Edmonton’s WinterCity Strategy development and provide their input into the initiative.

First, they were welcomed by City Councillor Ben Henderson – with a slide show of his fact-finding trip to several successful winter cities in Scandinavia.

Next, Edmontonian and NextGen member Carol Neuman wrapped up all the great things already happening in our city during the winter. Then the real work began. People gathered in small groups to give their ideas and recommendations for the WinterCity Think Tank.

And this is what they came up with:

Principles That Should Guide The WinterCity Strategy

Advice For The Think Tank

Recommendations For Think Tank As They Develop The Strategy

Ideas For An Exciting Winter City 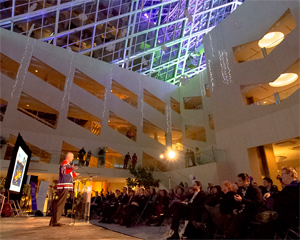 What better way to celebrate winter than with a winter party? Hundreds of Edmontonians gathered at City Hall on the evening of January 19, to celebrate and help kick off the development of Edmonton’s WinterCity Strategy. They shared their ideas for what would make Edmonton a great winter city – and took in the music, lantern making and free skate rentals.

The highlight was keynote speaker John Furlong, former CEO of the Vancouver Winter Olympics. He had people laughing and he had people holding back tears. But mostly he inspired: talking of the need to believe in Edmonton’s vision of becoming a great winter city and the importance of all Edmontonians being part of the magic to make that happen.

In 2011, City of Edmonton's Community Services was charged, under the leadership of Councillor Henderson, with developing a WinterCity Strategy: to recast Edmonton as a livable winter city that gets global recognition and attention for its major winter events.

They visited Oslo, Helsinki, Rovaniemi, Oulu and Kemi, and found several common themes to the success of these winter cities:

Public life: comfort and well-being in city spaces are enhanced through support for walking, biking, staying, meeting and playing in the city in the winter

Public spaces: designing city spaces that are inviting and safe, with consideration of visual and aesthetic elements for people in squares, parks and classic urban districts. Climate is considered in architecture, urban design, transportation and infrastructure planning.

Buildings: use of colour, proportion, spatial quality, façade details and retail life can influence the people’s experiences in a winter city.

Branding and marketing: how northern cities market and brand themselves as winter destinations.

The City of Edmonton, with City Councillor Ben Henderson taking the lead, began work on this project in 2010.

The Forum identified several key areas it felt would need to be addressed: