Recover uses prototypes as a way of testing collective learning. Prototyping, rather than pilot projects, rapidly tests the most uncertain aspect of an idea or concept.  Whether the prototype succeeds or fails, that learning is used to evolve the idea.

In 2017-2018, Recover generated over 200 “what if” ideas about possible action.  With our partners, we incubated 13 of these prototypes.  Six prototypes did not continue but 7 evolved and moved forward in 2018-2019.  In 2019, a new round of prototypes emerged from new research and partnerships in Strathcona.

In 2020, we focused on the prototypes that showed the most promise and also that had continued interest from community members. COVID slowed progress on them. In 2021, several of these prototypes continue and evolve, some wind down, and a couple of new ones have emerged as we continue to learn. 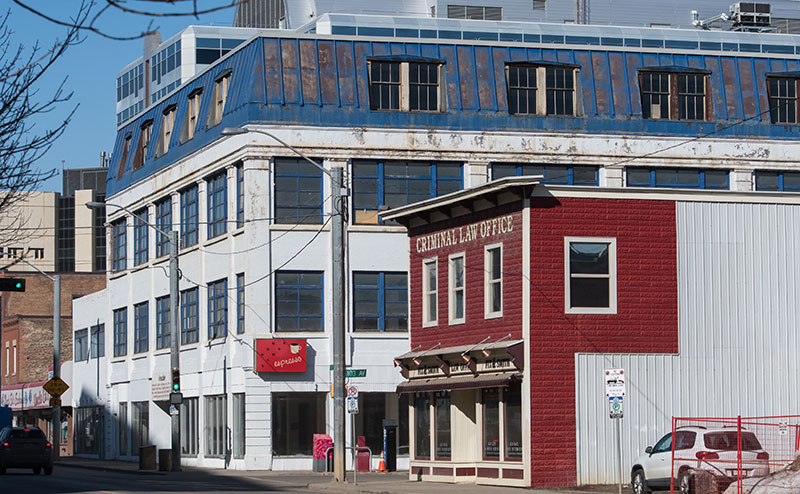 Check out one of 13 prototypes from our first year activating the Great Western Garment building in the Quarters. 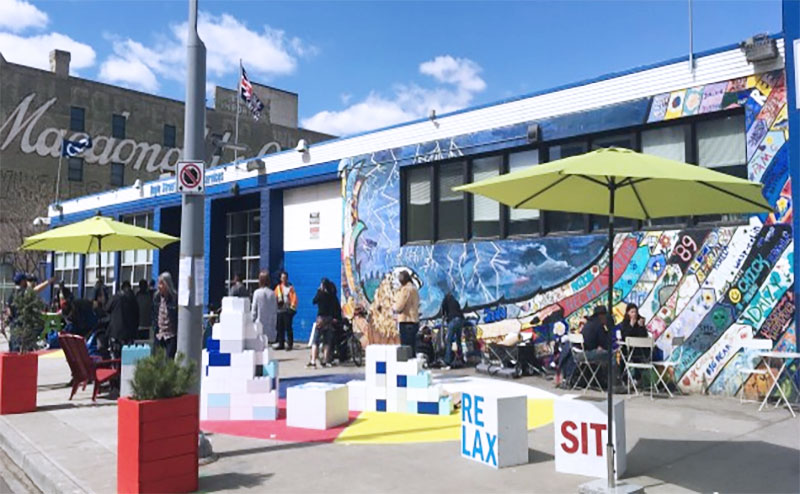 Check out one of 13 prototypes from our first year working with the clients and staff of Boyle Street Community Services.

What if we could hold space for individuals to make meaning from loss, to connect with others who have experienced loss, and for grief to be recognized in the places we live? This prototype emerged from the Connector prototype in 2020.

What if we could measure wellbeing in a new way and de-colonize data? This prototype aims to rebalance data as story, data as learning, and data as relationships.

What if we could connect businesses and neighbours with those living on the margins, and create community through a variety of means, including jobs?

What if we could nurture healthy reciprocal relationships between members of the downtown business community and street-involved people? This prototype explores the role of a sidewalk space in doing so.

What if we could find a way to connect with, and provide support for those people who don’t have a supportive network of people around them as they make the transition into parenthood?

What if we could find new ways of engaging potential residents and neighbours in the earliest stages of planning and developing affordable housing?

What if we could build a supportive community of business owners to collectively address issues related to homelessness?

This prototype is about learning how to work with post secondary institutions - individuals, classrooms, and teams - to apply RECOVER’s wellbeing framework and support other prototypes.

What if culture could help us to connect in this sidewalk space in which people often feel tension? This is a place-based prototype that is focused on the sidewalk space on the north side of Edmonton City Centre, on 102A Avenue, between 100 and 101 Street. It explores how to support more authentic connections - in the sidewalk space or even through elements in the space.

What if we could connect people who are looking for casual work with neighbouring businesses that have need of occasional labour, thereby building relationships and a more unified community along the way?

What if we could find a way to connect with, and provide support for, those who may not have a supportive network of people around them as they become parents? How can we enter conversations into “the heart space” with parents-to-be?

What if we could help people who are often the users of crisis diversion services to nurture the kinds of connection in the heart of our wellbeing framework? What would this look like? What new roles resonate most with street-involved Edmontonians - a Mourning Midwife to help deal with grief and loss? A sort of Alchemist who uses art in placemaking to connect to culture and the many layers of place? A Gardener who offers time in nature, developing green thumbs and a sense of purpose?

What if we could help businesses that want to be sustainable and socially active to also develop practices that nurture connectedness to the community? What sort of supports do businesses need in order to become more connected?

What if we moved away from large unsegmented, impersonal shelters towards micro-shelters and temporary housing that can be used to facilitate more segmented supports?

What if shelters had minimum standards for sleep-hours, space between beds, storage for people’s belongings, air quality and bedding standards to ensure people have the best chance at a good night?

What if a peer with lived experience helped support and build relationships to stabilize the transition to housing?

What if there was a suite of options that could help someone build relationships to support them through the transition to housing?

What if there were more of a gig-economy-based system (like Task Rabbit), where one could maintain a profile with reviews, take-up small jobs from local BIAs, non-profits, government, housing associations, etc. (could eventually include the broader community)?

What if we had more art and planting in back alleys?

What if we used empty, vacant lots and rooftops as spaces for community gardens, urban bee farms, greenhouses, or places for new playgrounds?

What if we looked at abandoned buildings and sites as venues for community collaboration?

What if there were a range of ‘thematic fellowships’ and ‘life apprenticeships’ for folks that enabled people to have a structure and to build a network around something other than their struggles - but around interests, skills and next career moves?

What if there were more physical spaces with a vibe of normalcy, where [marginalized] people might start to build other networks and find activities to fill their day?

What if co-parents expecting a child could access a range of spiritual healing supports together?

From art therapy, to guided virtual reality trips home, to help them gain a sense of clarity and vision for the parent and childhood experience they want.

What if the network of convenience stores, pharmacies, etc. had portable storage options to enable people to spend their days less encumbered by stuff?

What if there was accepted, integrated, 1-data, 1-service trust? (What if there was a software portal that allowed for healthcare and community organizations to exchange case management information? What if we could change the culture around “storing” information amongst workers and clients to workers/clients/communities, so they can access complete information)?

What if we had unique supports to create belonging in the neighbourhood through the community leagues and used food as a vehicle for new connections?

Community-Business Exchange Benefits for All

What if businesses and their neighbours in the community built connections and shared
interests on how they mutually benefit the community?

What if we knew what amenities to provide to activate the exterior space of the Bissell West building?

What if we knew what to invest in that would be attractive, solve problems, and be meaningful for the community accessing the space?

What if there was a Culture Learning Pass that brokered folks on the streets to cultural excursions - like art galleries, symphonies, theatres and helped manage empty seats?

What if we had more universally accessible public washroom facilities that complemented existing ETS bus shelters?

Iterating: With community feedback about the public washroom prototype attached to a bus shelter at Beaver Hills House Park, the next iteration is embedded in the Public Washroom Strategy, presented to City Council in April 2019. It received support from City Council and the community to continue adapting the Recover approach in 2019.

What if we could build momentum among small business owners in 5 neighbourhoods and expand their roles to support vulnerable neighbours and customers?

Iterating: Successful application for a Social Innovation Fellowship is powering this iteration, a partnership between MacEwan University, University of Alberta, Mitacs Canada, and the Nook Cafe.

The first prototype explored how to connect, inform and grow business capacity to connect and support vulnerable Edmontonians and included an after-hours training about naloxone kits for a few small businesses in the core.

This year’s research fellow will answer questions left unanswered from the first prototype, ultimately developing a network and incentives to support and recognize more businesses taking on a range of socially conscious practices.

What if we incentivized property owners with empty storefronts to temporarily support new social businesses/micro-entrepreneur while they test their ideas?

Iterating: A Social Innovation Fellowship, supported by a partnership between MacEwan University, University of Alberta, Mitacs Canada, and Arts Habitat.

The first iteration activated the Great Western Garment building, through storefront exhibits by local artists from iHuman and the Indigenous Arts Movement of EndPovertyEdmonton.

In the second iteration, the research fellow is surveying and tracking vacant lots and properties in downtown neighbourhoods in an inventory, as well as exploring tools and recommendations to make it easier for property owners to lease space on a short-term basis and for artists to access these resources.

Learn more about the research in the resulting handbook, Activating Empty Storefronts, prepared by the Social Innovation Fellowship.

What if Recover Edmonton tested guaranteed annual income in the core neighbourhoods?

Launching with the leadership of the community partner EndPovertyEdmonton. In Year 1 it engaged local influencers through interviews to determine their awareness of Universal Basic Income (UBI) and questions about it. It has moved ahead with a focus on mobilizing support in Edmonton to engage with the Calgary Basic Income Group and its 2019 conference, forming a greater provincial alliance.

What if we improved the front-face of service providers’ buildings to facilitate human connection, destigmatize service and provide dignity to vulnerable people?

Launching with the leadership of the community partner Boyle Street Community Services. Infrastructure and resources to scale the prototype into a pilot project have been purchased. The agency plans to re-activate the sidewalk space in the spring/summer of 2019 with these resources as well as an animator. The architect from this prototype has also met with City staff to discuss incorporating elements of the prototype into the Columbia Ave renewal concept.

What if we tweaked the service experience so that service navigators were agents of systems change with the province?

The 2 prototypes pivoted and merged as “All About Connections,” which is iterating under the leadership of the community partner REACH Edmonton. REACH received support and funding from City Council in the December 2018 budget to pilot this project about a Connector role in the 24/7 program for warmer hand-off, building off of learnings from the first iteration.