As part of The City Plan implementation, City administration completed a mass transit technical study that identifies a mass transit network to support a population horizon of 1.25 million people.

Mass transit describes a number of types of public transit vehicles that carry higher volumes of passengers in urban areas. This  mass transit technical study (16.23 MB) is the first step in advancing Edmonton’s mass transit network beyond the LRT network, and an important part of Edmonton’s journey to achieve its goals for greenhouse gas emissions reductions.

We’re in the strategy phase of this project which means outlining how we should expand the LRT network and identifying candidate corridors that could be served by non-LRT mass transit (such as bus-based or rail-based service) to complement the LRT network.

The mass transit network for 1.25 million people consists of routes that serve three types of functions: 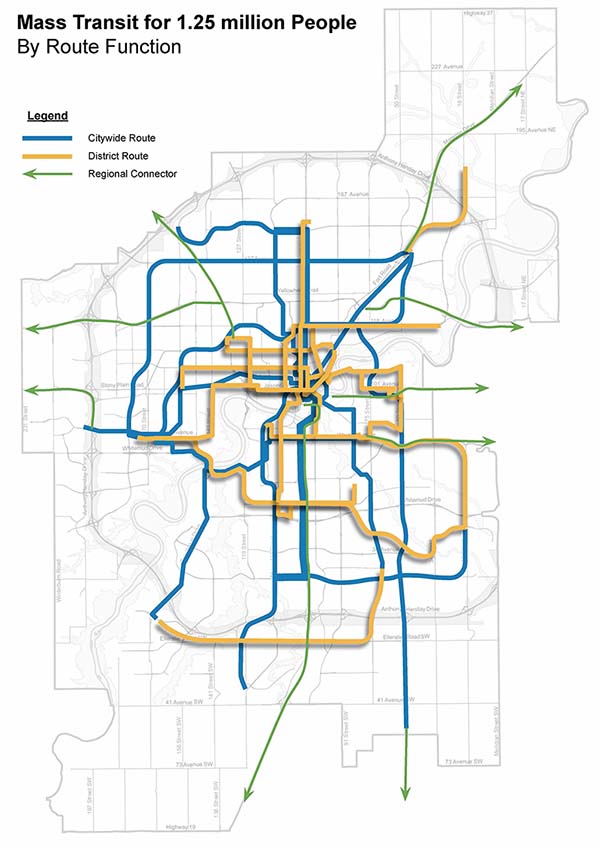 These routes can also be described by service type:

Semi-Exclusive Routes (shown in red) allow transit vehicles, like buses,  to operate in a separate lane from other vehicles for parts of the corridor and are mixed with other vehicles for other parts (i.e., at intersections, driveways and/or turn lanes). These types of routes are sometimes described as bus rapid transit. In Edmonton, most of these routes are anticipated to be bus-based, but rail-based options, such as streetcar or tram, could still be considered.

Frequent Transit (shown in magenta, thin) provides high service frequencies to serve busy routes and minimize waits and transfers. Stops along frequent transit corridors tend to be spaced closely to reduce walking distance for people and to make transfers more practical. Because of this, frequent transit routes tend to be slower than rapid routes but can potentially move high volumes of people along densely populated corridors.

Regional Connectors (shown in orange) operate partly or entirely outside of Edmonton. Most regional connections operate as rapid transit routes between municipalities in the Edmonton Metropolitan Region like St. Albert, Sherwood Park and others.

Airport Connector (shown in purple) is a bus-based mass transit connection between Downtown and the Edmonton International Airport. It does not consist of an extension of the LRT past city boundaries. 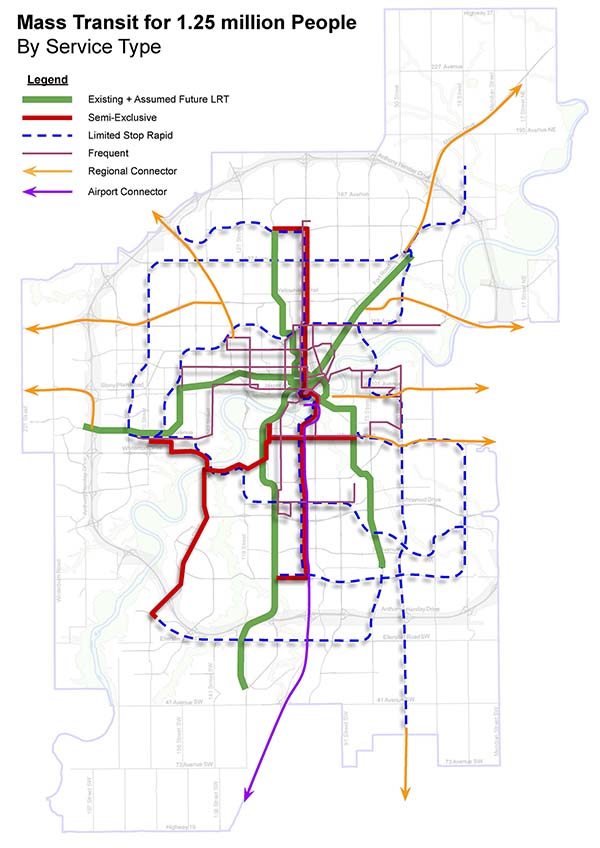 Note: these are the same routes shown in the Mass Transit Network for 1.25 million People by Route Function map, but each route is described based on service type.

Four success factors that are key to supporting the mass transit network for 1.25 million.

The next step in mass transit planning for 1.25 million people is to develop an implementation plan. The outcome of this work will be to confirm mass transit route alignments (that is, on which streets the routes will run), outline the type and level of transit service, and identify corridor-level design details to outline how the corridor could look and feel with mass transit. This work will start in 2022 and continue into 2023.