Early conservation efforts usually centred on the promotion of historic sites, which was typically done with plaques or place markers.

A number of sites were identified as early as 1950 to receive plaques, including the Walter House, the Lauder House, Garneau Tree and Hardisty Tree, but these plaques were not erected for several years.

Two of the earliest sites to receive plaques included the Hermitage in 1951 and the Latta Bridge in 1952.

Canon Newton and the Hermitage

On June 18, 1951 the Archives and Landmarks Committee unveiled a plaque commemorating Cannon William Newton and the Hermitage.

Cannon Newton was an Anglican minister who arrived in the Edmonton settlement in 1875 and erected a dwelling 10 km east of the Fort.

He called his home Hermitage, and it grew to consist of a library, a school, a hospital, and a chapel. He planted lilacs in the garden, and they still grow in the area today. 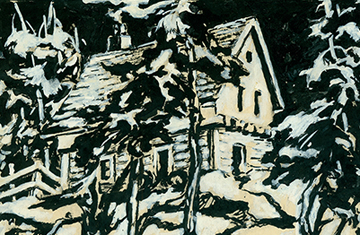 Detail: The Hermitage by Ella May Walker

The Latta Bridge was named after David Latta, a North West Mounted Police officer and blacksmith who arrived in Edmonton in 1897.

Latta was elected Alderman in 1906 and in 1907 built a house next to the ravine which bears his name.

As early as 1911 a trestle bridge spanned the Latta Ravine, however due to increased traffic it was replaced with a steel structure in 1936. It was never formally named, and for many years was known as the Latta Bridge as well as the Elks Bridge, after the Benevolent and Protective Order of the Elks, whose fraternal hall was nearby. It was at the request of the Archives and Landmarks Committee that the bridge be formally named for Latta. 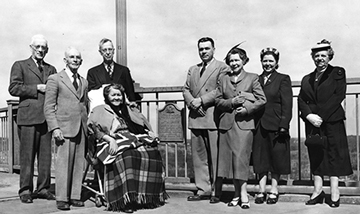