Blatchford is an urban community in the heart of Edmonton, designed to be a great neighbourhood for families, a catalyst for transformational land development, and a path towards a more resilient future.

City building is about long-term decisions. Once you’ve developed land, you can’t start over again. Decisions last for generations.

While the neighbourhood continues to evolve, the project continues to build from a vision statement approved by Edmonton City Council in 2010: “Blatchford will be home to up to 30,000 Edmontonians living, working and learning in a sustainable community that uses 100 percent renewable energy, is carbon neutral, significantly reduces its ecological footprint, and empowers residents to pursue a range of sustainable lifestyle choices.” 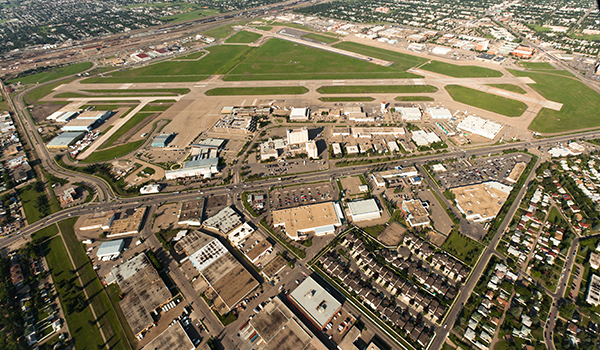 A few years ago, Edmonton had two airports.

The first was a site of pioneering aviation. After Blatchford Field opened in 1927, it became a “Gateway to the North” for bush pilots and northern communities and served as a vital link in Allied war efforts.

As commercial aviation grew, so did infrastructure demands. In 1960, the city opened the much larger Edmonton International Airport.

Neither airport was as commercially competitive as possible. A back-and-forth public debate began. Plebiscites in the 1990s saw a narrow mandate to keep both open, then favoured closure three years later.

In 2009, City Council voted to completely close the city centre airport. In its place, they imagined a sustainable new community built around people and public spaces. 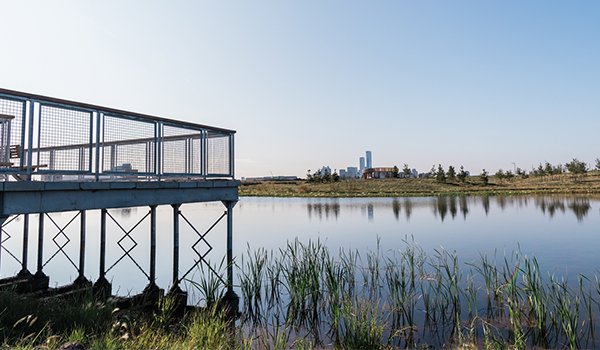 By creating an energy efficient, high-density neighbourhood right in the city core, Blatchford will play a key role as Edmonton plans for another million residents in the next few decades.

As developer, the Blatchford Redevelopment Office is uniquely positioned to keep the long-term vision in mind, recognizing that it takes time to do things differently. The City of Edmonton has owned the land for nearly a century, and because land sales generate revenues, Blatchford can grow without affecting property taxes. It’s a similar model to Edmonton’s Griesbach neighbourhood, a former military base being developed by a self-financing federal Crown corporation.

Blatchford is aimed at Edmonton’s “missing middle,” flexible multi-unit housing available in urban centres around the world, yet missing in most Canadian cities. Mixed-use spaces will also help Blatchford become a 15-minute neighbourhood, where all daily needs can be met without ever having to turn on a motor.

The city’s role also includes planning and design of streets and parks, creation of building guidelines, oversight of the installation of necessary infrastructure like sewers and utilities.
All this can be accomplished with a small team and the right partners. Contractors are hired to put shovels in the ground. Parcels of land are independently assessed and sold to private builders, who work within customized architectural and green building codes. Residents buy their homes from builders, like anywhere else in the city. 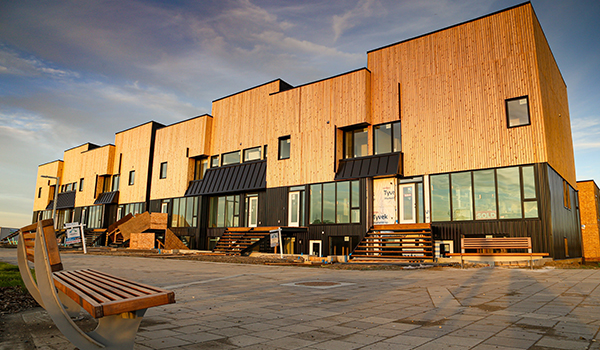 Neighbourhoods can take more than a decade to move from initial planning to moving trucks. In Blatchford, residents arrived less than seven years after the final plane lifted off the runway.

During the initial stages, the Blatchford team was planning, designing and working through approvals. After that came construction of sewers, roads and energy infrastructure for a community that will one day be home to a population similar to cities like Leduc or Spruce Grove.

Blatchford is nearly the same size as downtown Edmonton, it won’t be finished overnight. Depending on long-term housing markets, Blatchford’s full development is expected to take roughly 25 years at a pace typical of other neighbourhoods in Edmonton.

Resilience for the Future

Learn more about the Blatchford community