Find out more about Edmonton’s annexation of land south of its existing boundary to accommodate future growth.

On January 1, 2019, two areas of land from Leduc County and the Town of Beaumont became part of Edmonton. Residents of those areas are now Edmontonians.

Information on the annexation application, timeline and public engagement is available below. Learn more about how the transition affects residents living in the annexed area.

An application has been accepted to repeal the North Major Area Structure Plan (Bylaw 14-04), a Leduc County plan which guided land use in the annexed area.
Learn more about this proposal and an upcoming public engagement event.

Getting Ready for Growth

To ensure that we have enough land to accommodate growth, the City of Edmonton annexed land south of the boundary.

The annexed area includes 8,260 hectares agreed upon by Leduc County, and 7 hectares for part of the road right of way for 50 Street that was  uncontested from the Town of Beaumont.

The Municipal Government Board held hearings on the application and made a recommendation to the Province. The Province made a decision to approve the annexation on November 27, 2018. The annexation took effect January 1, 2019. 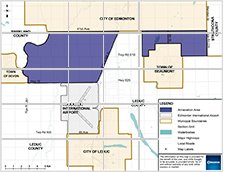 The City of Edmonton will not be charging residents in the annexation area for dust suppression, and residents do not need to sign up for this service.

The City will be applying two applications of dust suppressant annually. The first application will be in June and the second application in August. Residents can report any concerns related to dust by calling 311.

The City has identified priority areas for paving Edmonton Annexation roads. Paving will occur in summer and fall 2021. Property access and construction staging will be evaluated prior to construction. See Edmonton Rural Road Rehabilitation.

On June 12, 2018, the City of Edmonton made presentations at the Municipal Government Board Merit Hearing to summarize the annexation application and the associated technical studies.