LRT expansion plays a critical role in enhancing mobility and access for Edmontonians and will transform the way people live, work and play in the city for decades to come.

The following update is prepared twice per year to help City Council and Edmontonians stay informed on progress being made to advance LRT expansion and renewal across our city. It provides an overview of the current stage of each major LRT project, work completed earlier this year, anticipated timelines for construction and operations, and current/upcoming work that Edmontonians will see and experience this construction season. 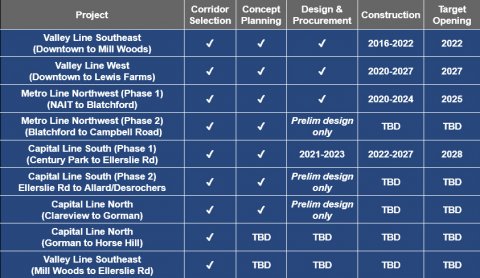 Valley Line Southeast will be an important addition to the City’s integrated transit network, and will add approximately 13 kilometres to Edmonton’s mass transit network. In early-to-mid 2022, TransEd, the group of companies building and operating the line, completed a number of landscaping projects along the alignment, along with the vast majority of final detailing work at several locations. Train drivers also began specific training exercises (classroom and in the trains) to familiarize themselves with operational details and processes.

TransEd is continuing with testing and commissioning work to ensure trains are operating safely along the tracks. Part of this testing is train integration with the traffic signaling system. In early summer, trains started to successfully pass through certain intersections along the alignment without flaggers present to monitor traffic flow. This is an important milestone for TransEd.

Throughout July, TransEd is planning to complete testing on many more intersections along the line. After intersection testing is completed safely, TransEd will begin system integration and demonstration testing on the entire line. This will coincide with additional training for train drivers. TransEd anticipates service commencement later this summer.

The City and TransEd continue to roll out public safety education campaigns. The City’s campaign began in January to help Edmontonians learn how to stay safe around this new style of low-floor LRT. The campaign will continue until after service commencement. Remember, if you “See Tracks. Expect a Train.”

MIP is in the midst of their first major construction season this year. MIP is focusing on work near West Edmonton Mall and Misericordia hospital, along Stony Plain Road, 156 Street/Meadowlark Road, and near Lewis Farms.

Significant work will occur this year on the foundation columns for the elevated guideway and two elevated stations at West Edmonton Mall and the Misericordia Community Hospital. MIP anticipates the foundations will be completed by the end of the 2022 construction season.

Construction is underway on preparation work for the train storage facility at Lewis Farms. This storage facility will be located south of the existing Lewis Farms transit centre. In addition, early work will start this year for the bridge over Anthony Henday Drive, along with excavation and drainage work that is needed for roadway relocations.

During construction, MIP will continue to landscape along the route which includes tree removals when absolutely necessary. The City values every single tree, and removals are guided by the City’s Corporate Tree Policy that prioritizes the preservation and protection of trees. Arborists follow strict protocols as part of the decision-making process. Where trees need to be removed, MIP will be replanting approximately 3,000 native species that are better suited to Edmonton’s natural environment to improve the long-term health of our urban tree canopy.

Metro Line Northwest extension, from NAIT to Blatchford, will be a critical mass transit connection into the city’s downtown core, and will help serve a growing student population at NAIT and the 30,000 future Edmontonians who will call Blatchford home - a sustainable community that uses 100 per cent renewable energy. This LRT extension will set the stage for future expansion from Blatchford to Campbell Road, which has been reaffirmed as a key priority for City Council.

Construction in early 2022 predominantly focussed on preparation work for the trackway, underground utility work in Blatchford, and work on the two new stations and utility complexes being built in Blatchford (NAIT/Blatchford Market Station, and Blatchford Gate Station).

During this year’s construction season, crews are continuing to build the station platforms and utility buildings in Blatchford. Work on the Blatchford utility complex will include masonry wall construction and steel erection. Construction will also begin on installation of the overhead catenary system that provides electricity to the trains, as well as starting to lay down the concrete trackway and the tracks. The trackway is expected to be completed this year, and the remaining rail installation will continue into 2023.

In 2023, crews will install equipment in both utility complexes, and connect the new NAIT/Blatchford Market Station trackway to the previous temporary NAIT Station. The Metro Line LRT extension to Blatchford is expected to open in 2025.

Capital Line South (Phase 1), a 4.5-km extension from Century Park station to Ellerslie Road, will help serve the growing population of south/southwest Edmonton. In early 2022, the City received official funding which allowed key work to proceed on selecting an overall Design-Build (DB) approach for the project. The City also launched the procurement process for selecting a main contractor to build the line. The procurement process will take approximately a year and we plan to have a contractor selected in 2023.

Current early construction is focused on preparing the future LRT corridor for full construction to begin in 2023. Edmontonians will see, and hear, work near the intersection of 23 Avenue and 111 Street including hydrovacing to prepare for utility relocations. Hydrovacing will occur on an ongoing basis.

Early work will also begin on a storage tunnel, with a lift station, that is needed for the underpass that will go below 23 Avenue. This system will fill during heavy rain, and ultimately prevent water from pooling on the tracks. Work on the storage tunnel and lift station is anticipated to begin in summer 2022.

Tree removals along the line will also be taking place, with crews removing, relocating and pruning trees as necessary along the route. The City values every single tree and works hard to reduce impacts to trees. The City will protect and work around existing trees when possible, and relocate/plant new trees where necessary. 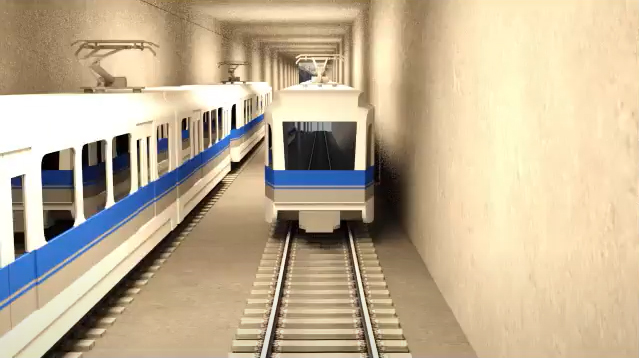 Each year, the LRT Renewal Program focuses on replacing aging infrastructure in order to keep the existing transit service operating safely and smoothly. This work can vary from smaller projects, like replacing deteriorating concrete and platform warning tiles, to major projects like station redevelopments. This is what we call our “TLC for LRT” work.

For more information, visit the TLC for LRT’s page.

The original Stadium LRT Station was one of the first stations to be built in Edmonton in the late 1970’s. Redevelopment of this station began in 2020, and the work is scheduled to be completed later this summer. The project includes closing the underground concourse, providing barrier-free access at the end of each platform and adding a new platform on the west side of the tracks. Improvements also include new heated shelters, new public washrooms and a new security office.

There will also be three escalators replaced at Central station. Construction will take approximately nine months to complete all three escalators. Edmontonians will be informed of closures through social media and onsite signage.

The LRT expansion projects approved by City Council will require significant growth in the Light Rail Vehicle (LRV) fleet in the coming years. This, combined with the need to replace the 37 original high-floor LRVs that have been operating for over 40 years, results in the need to procure a considerable number of LRVs in the next 8-10 years.  Administration is planning to replace the original LRVs by 2030.

LRV procurement for LRT expansion projects (i.e., extensions to the existing lines or new lines such as the Valley Line) is summarized below:

This project includes the addition of 26 new Bombardier Flexity low-floor LRVs, which are being supplied through the Valley Line Southeast P3 Project Agreement with TransEd Partners.

Administration has selected Hyundai Rotem Company as its preferred proponent to supply 46 new LRVs for the project. The City anticipates these LRVs will be delivered beginning in 2025.

As part of both of these LRT extensions, Administration will be procuring a total of 30 high-floor LRVs. The vast majority of these LRVs will service the Capital Line South extension (Phase 1), while the others will serve the Metro Line Northwest extension from NAIT to Blatchford. The City anticipates that procurement for these LRVs will take place in 2023-2024. 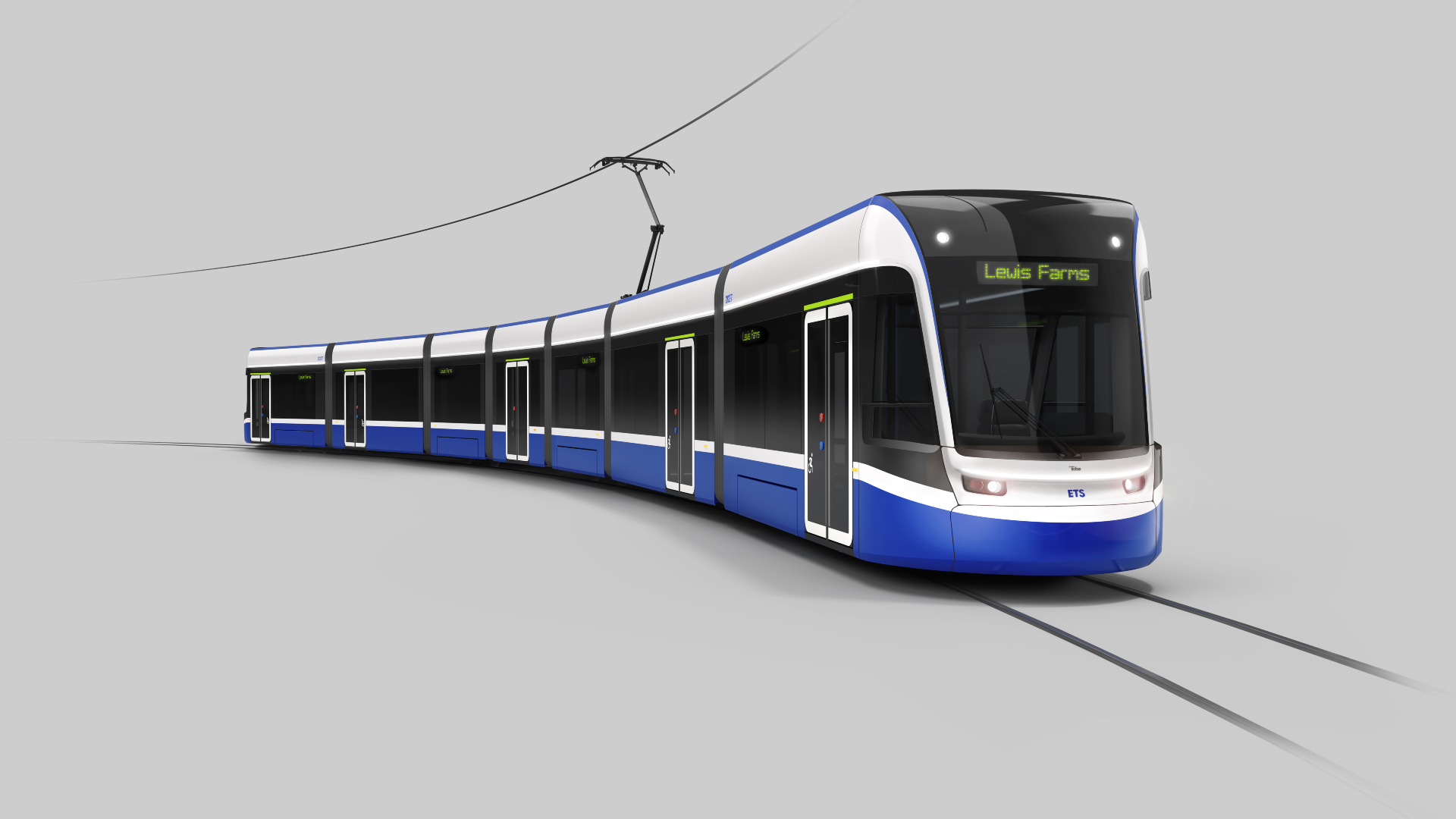 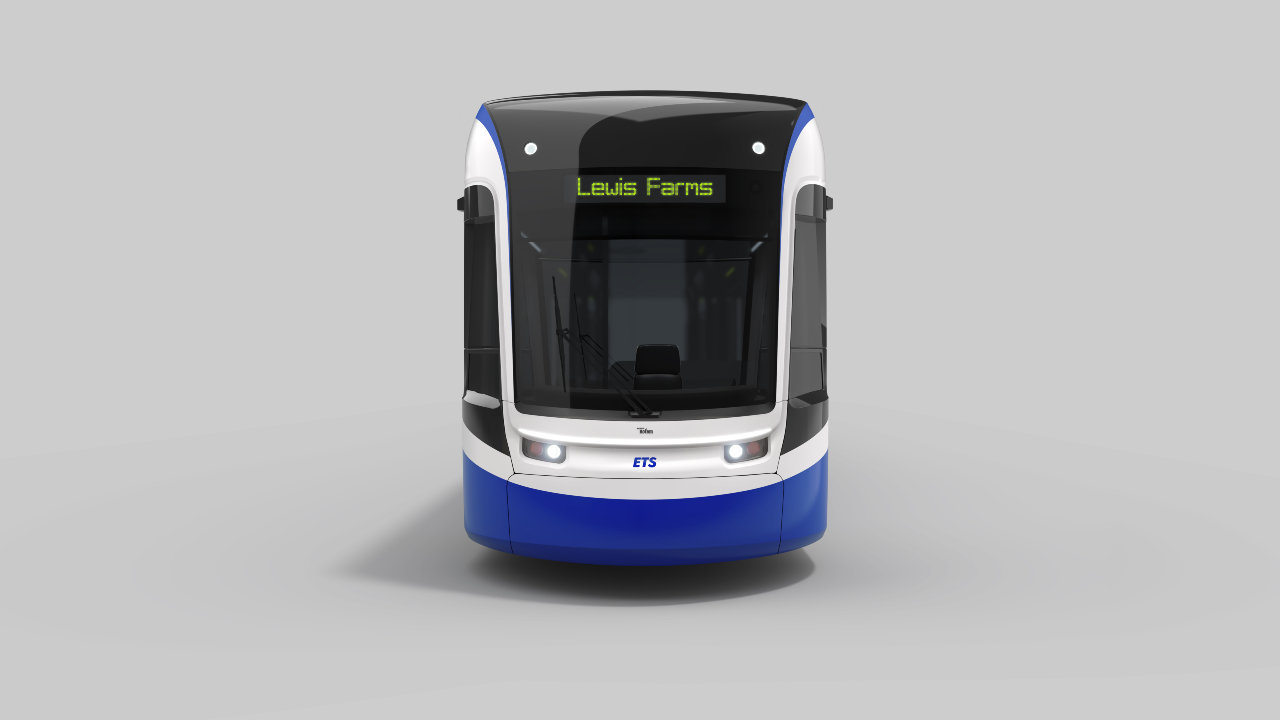