The City of Edmonton has received a proposal to expand the existing Orchards Neighbourhood Structure Plan by adding 110 hectares of land. This area is currently designated as Neighbourhood Four in the Ellerslie Area Structure Plan. By adding this land to the Orchards, the applicant suggests that the neighbourhood will be better connected and provide all the amenities necessary for a complete community. 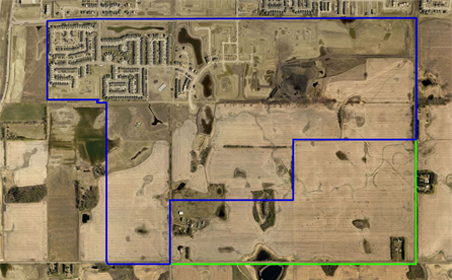 This area was originally identified as a separate plan area (Neighbourhood Four) in the Ellerslie Area Structure Plan. The applicant proposes to add this area into the Orchards NSP to create a more connected neighbourhood. This requires a major amendment to the Orchards at Ellerslie NSP to designate land uses and infrastructure that will connect the two areas.

Purpose of the Amendment

Once the Orchards neighbourhood is completely developed the total population will be approximately 15,400 people.  How quickly the area develops depends on housing demand and other market conditions.

Key Features of the Amendment

The land uses proposed are consistent with the existing, developed area of Orchards.

This application will go through the following steps: