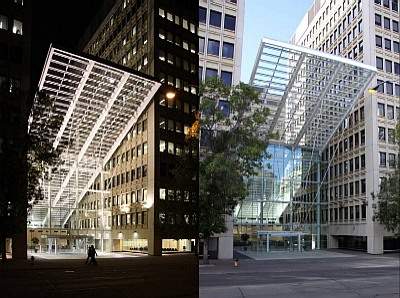 Location: 107 Street between Jasper and 100 Avenues

Capital Health Centre involved a redesign of the ground floors of twin office towers built in the 1970s, previously connected by a cramped, hidden and uninviting entryway, as well as a new entry space in between. The challenge was to make the complex worthy of its new role as the Edmonton headquarters of Alberta’s largest employer.

The new entry provides users with an open, all-seasons gathering space to be used as an exhibition and event space. The thoroughly shaded space provides ample natural light during the winter, without harsh direct sun and its heat during the summer, creating a naturally-lit refuge from the low ceilings in the towers.

In addition to the transparency of street-level uses, the new entry has a strong presence from 107th Street, as well as visibility from Jasper Avenue, serving as a useful way-finding device for the building. After dark, the structure is lit up to animate the streetscape and give it a greater sense of security.

The large sloped roof offers a simple design strategy that adopts a civic scale from the exterior, yet recedes to an intimate human scale inside—drawing the street into a gathering space that is both urban and intimate.

The design maintains the original entry’s footprint, to minimize interruption of the underground parkade, but does so with a single span, “rod-stayed” structure. The desired effect is a welcoming roof that appears simultaneously substantial and weightless, giving the impression of an open, “floating” raft that complements the existing towers.